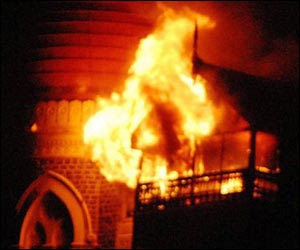 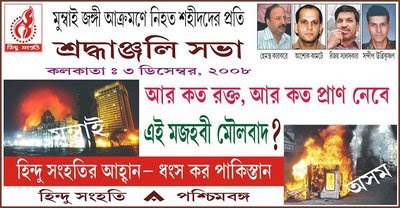 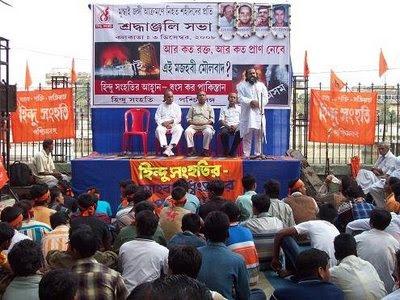 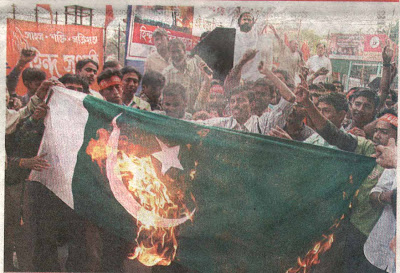 Kolkata,3rd December 2008 : They won't light up the candles for a formality sake, they torched the Pakistani Flag. They condemned the Pakistani Terrorist attack at Mumbai on 26/11, the Paki Plan to destruct the Indian National Integration and the impotence & inaction of the Central & State Government to stop the Islamic Terrorism in India. They paid Homage to the Mumbai Martyrs. The Members of HINDU SAMHATI all united and gathered for this at College Square, Kolkata, the cultural capital of India on 3rd Dec 2008.

Hindu Samhati members shouted the slogans BANDE MATARAM ! Long live Mumbai Martyrs ! Crush the Islamic Jihad! Shame to Indian Politics! Stop the Jehadi activities in India across the border! And BHARAT MATA KI JAY !! The condolence and the protest meeting was presided over by Sri Barid Baran Guha, a veteran Hindu Leader of Bengal. SRI TAPAN GHOSH, Convenor of Hindu Samhati was the main speaker. Sri Salil Dasgupta, Upananda Brahmachari, Prakash Das, Goutam Pal, Sushen Biswas, Ajit Adhikary were the other speakers in that meeting. Huge police arrangements and interest of the media were marked as a prominent feature in that occasion.

In his speech Sri Tapan Ghosh warned that the Bengal Situation is worsening gradually for the cause of Islamic Terrorism and Muslim Infiltration from Bangladesh. Though it is a great loss of some ATS & Security Personnel in the Mumbai Terrorist attack and loss of 200 lives along with heavy injuries of people (National & International) , but the ATS & Mumbai Police did a definite blunder by engaging its full contingent wholly for the case of Sadhvi Pragya, Col. Purohit, Swami Dayananda , Samir Kulkarni and others.
By this intrigue, the ISI managed to prepare the Blue Print to destruct Mumbai and the ATS & Mumbay Police failed to resist them in time. Huge explosive, arms and ammunitions reached the heartland of the financial capital of India, MUMBAI from Karachi through a voyage in Arabian Sea, by defeating the vigilance of Indian Cost Guard, Indian Navy, The Maharashtra Govt. and the UPA Govt. in the Central. Sri Ghosh also stressed that the situation of West Bengal in a very damaging condition through the pseudo secular approach & muslim appeasement by Left Front Govt. here. As a result Bengal has made a fortified place of the Islamic Jeehadis in all respect. This situation can only be changed through a mass HINDU ACTION to destruct the Islamic Terrorism in India. He also mentioned the plight of Kashmiri Hindu People under de-facto Islamic rule imposed there. He also indicated that the Prime Minister, Home Minister, National Security Advisor, the Chief Minister of Maharashtra and Home Minister there are most inefficient persons and they should be charged for the attack of 26/11 in Mumbay. Only some resignations in the Central and State Ministry can't compensate the loss of the Nation and the bereaved families. Hence, THE HINDU AWAKENING IS A MUST. The Martyrs are murdered not by the Jeehadis only, but by the Govt. authorities who had diverted the attention of ATS towards an imagined Hindu Terrorism. Therefore, Sonia Gandhi, Monmohan Singh and M.K.Narayanan must be punished for this heinous conspiracy against Nation.

Prominent activist of Hindu Samhati , Upananda Brahmachari told the media persons that the existence of Pakistan is a natural and perpetual threat to India. We should destroy all the Terrorist Training Centers run by ISI & DGFI in Pakistan, POK( Pak occupied Kashmir) and Bangladesh to save the Indian Nation and the Civilization as well. Though Pakistan is denying its involvement in 26/11, but the reality shows the role of Pakistan Govt., the ISI in all the terrorist activities in India very clearly. Now, the Govt is contemplating to keep the option open for a direct action against Pakistan. This is a very just demand for any patriotic citizen of India. But the majority Hindus also stand strong to accept the challenge of Islamic Terrorism and fight accordingly. In his speech Brahmachari said that the Kolkata Intellectuals should understand the real situation under the threat of Islamic Fundamentalists in Bengal, when the 'Kolkata Connections' of Jeehadi activities are evident through the procurement of mobile SIM, explosives, man power etc. from Bengal and particularly from Kolkata. The Bengal Intellectuals should not issue only the Rizwanur case for highlighting their secular brand, but to protest against the Islamic Jeehadi activities also. He also indicated that some muslim fundamental elements are very active in Kolkata and it exercised its power through a havoc hooliganism on 21.11.2007 to drive out Taslima Nasrin from Kolkata. One Imam of Tipu Sultan Masjid, Kolkata uses to issue Fatwa against Taslima time to time including her beheadment(quotwal) as an ultimate Islamic punishment. But the Kolkata Police or the State Administration do not take any action in this regard. Consequently, the Hindus are bound to take appropriate action with any limit to check such fundamental elements.

Sri Prakash Das reminded the audience the Direct Action against Hindus on 16 Aug,1946 in Kolkata by the Muslim Supporters for Pakistan. The same mentality is still active in Mumbai and every where in India under Islamic Jeehad. In his inaugural speech,Sri Gautam Pal invited Hindu Youths to be united under the banner of Hindu Samhati and combat the Islamic Terrorists in the same language in which they understand appropriately. Sri Salil Dasgupta, a veteran educationist addressed the audience in a very erudite manner saying these Marxist of Bengal supported China in 1962 war and the same people are supporting Muslim Fundamentalists for Vote Bank. This will endanger the situation further. Sri Barid Baran Guha in his presidential speech , stated that the present programme will certainly send a positive message to all concerned over the critical situation created by Islamic Terrorism India and Bengal too. He coveyed his aspiration for a TERROR FREE INDIA with the help of Hindu Organisation like HINDU SAMHATI. 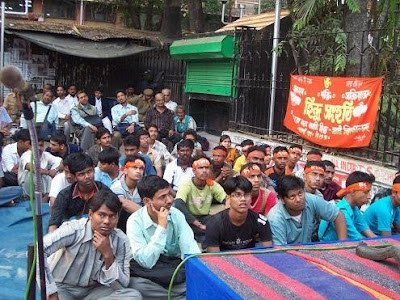 Posted by Bengal Spotlight at 3:46 AM