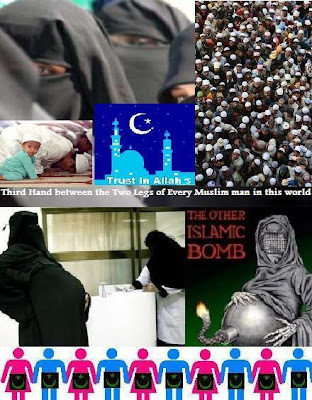 14 children of a Muslim Mother in North Dinajpur. 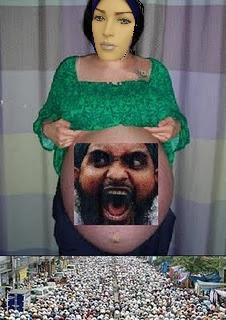 Though the issue of motivated and uncontrolled birth rate in the Muslim population under the instigation of the fundamental Islamic clerics in the subcontinent, West Bengal popes up with a massive Muslim birth rate in the border districts for which the so called secular media persons now feel a unavoidable concern for all.

“Sangbad Protidin” a leading Bengali daily in West Bengal covered this burning news on its 18th June 2011 issue under the caption: 14 children of a Mother, Population Blast in the Border, Administration Worried.

Whenever the journalists in the Hindu folds want to highlight the matter of huge increase of Muslim population through a motivated birth rate so provoked by the Fundamentalist Muslim clerics and the unchecked Muslim infiltration from Bangladesh to India, along with the vast border line of West Bengal, the whole matter is branded as a communal one. The political parties in West Bengal never oppose the issue of rejection of birth control by the Muslim community or the easy access of Bangladeshi infiltrators into native Muslims in West Bengal for the easy gain through Muslim vote bank politics.

Protindin, a news paper now with the ruling party, depicts a dangerous threat of outburst of Muslim population in more than 100 villages in Islampur block in Uttar Dinajpur district in West Bengal – Bangladesh border. The areas of Agdimati, Khanti, Bamlagaon, Sujali and Govindapur near Islampur is overburdened with the families with 14/15 children or more in a family or for a single mother. Uttar Dinajpur is a Muslim majority district in west Bengal with more than 3000 Mosques and Madrashas, from where the teaching of “birth Jihad” always imparted to stay in a clear majority of Muslims in the world. The minority Hindus bears an inexplicable situation of extinction and put under the Birth Control propaganda by the Govt. The Govt. in the Family Welfare sector has totally unsuccessful to get any breakthrough in the teaching of Islam for “No Control over the Third hand of Allah between the two legs of every Muslim Man”. 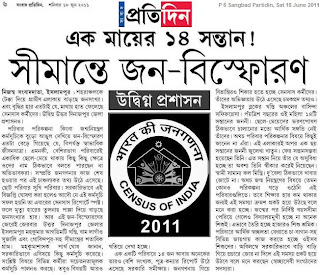 The census workers of these areas face a great trouble, when the parents or the guardians of the family do not convey the names of their children and the age properly as they sometime reside in different premises with the many wives of a Husband separately or arranged. These children are mostly dropout in schools and capture the line of smuggling, drug trafficking and other anti-social activities.

In Khunti area of Islampur block one Safirunnesh (35) has 14 children on her own. Pregnant Julekah (28) has 6 children with unfortunate two earlier cases of still born babies. This is a very common picture in all around the areas of borderline Uttar Dinajpur districts, where the up growing uncontrollable Muslim population is a threat to the local administration for many reasons.

The “small family-happy family”… “choto parivar-sukhi parivar” is a meaningless slogan to the Bengali Muslims in Uttar Dinajpur or in the whole of West Bengal. Muslims consider more numbers in the family is the means to earn and the strength to fight against non-Muslims to overpower the opponents. Though, Mr. Partho Ghosh, Sub Divisional Officer of Islampur communicated some plan to take over the situation, the Govt. employees in Health, ICDS or Panchayet Department always fear to run vasectomy, tubectomy or Pulse Polio programmes in the Muslim areas irrespective their strength of majority or minority.

However, this is not the singularized picture of North Dinajpur, Malda or Murshidabad (three Muslim majority districts in West Bengal), the whole of Muslim prospective mothers in West Bengal are in the process of rigorous wombing (population bombing) by their crazy husbands under the Quranic dictum.. “Your women are a tilth for you (to cultivate) so go to your tilth as ye will” Q 2.223. This is the message of Islamic Globalization @ Pan Islamism for us.

Writer can be reached at sambuddha.gupta@gmail.com
Posted by Bengal Spotlight at 10:13 AM 2 comments:

Danger of going to marry a Mustakin or Rasheed. 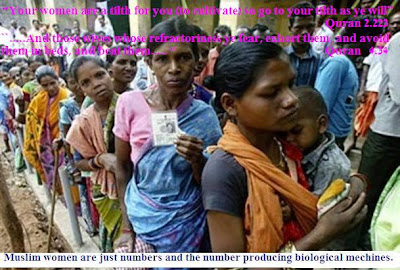 Court convicted four Muslims for 12 years as the house wife was murdered by torching with kerosene.

A designated fast track Court at Uluberia in Howrah Dist, West Bengal, today pronounced 12 years imprisonment along with a fine of another three thousand rupees each for a ghastly murder of a House wife named Maududa Begum (25y) by her husband Mustakin, Mother-in-law Zubeda Begum, Sister-in-law Pakeeza Begum and Brother-in-law Sheikh Azizul, so far attempted on 29th February, 2008.

In a packed court room, Justice Ashim Kumar Das put a provision of extension of three months imprisonment, if the fines are not appropriated. The near relations of murdered Maududa have expressed their satisfaction for the justice so delivered.

A terrible Mustakin Sheikh married Maududa as his third wife on 26th August 2007 at Tehatt-Basudevpur in Howrah. The earlier two wives escaped from Mustakin due to his severe torture. It was not known the parents of Maududa, a resident of Chengail near Uluberia.

The marriage of Mustakin and Maududa was arranged with a dowry of Rupees 50000 in cash and gold about 55 gms.

But, within three months the family of Mustakin claimed other One Lakh rupees from Maududa's family. As Maududa's family was not in a position to provide the amount, Mustakin started beaten up Maududa regularly with other family members including sexual harassment. Apprehending no chance to get further money from Maududa's family, on 29th February, 2008 at broad day light the accused persons poured kerosene to Maududa and Mustakin himself fired Maududa with his match box.

A failure neighbor of Maududa sent her Uluberia sub-division hospital, from where she was referred to Kolkata SSKM Hospital. On 4th March 2008, Maududa succumbed a tragic death being hurt by more than 90% burn injury.

Next day, Mohammed Ali Sana, the bereaved father of Maududa lodged a FIR in the local police station.

One may not escape this news also. This is from Times of India, Delhi Edn.

BANGALORE: A 22-year-old woman from Delhi succumbed to her injuries and her fiance miraculously escaped with minor injuries after their autorickshaw was knocked down by a speeding BMTC bus in Yeshwantpur on Sunday night.

The deceased, identified as Poonam Rajput, and her fiance, Rasheed, had eloped from Dehli and stayed in Yeshwantpur for four months. They were heading towards a shopping mall in Malleswaram when the accident took place near Yeshwantpur 9th cross.

Investigating officials said Rasheed fled the scene with the victim's jewels soon after she was taken to a nearby private hospital.

However, the other Poonam and Purnima, Neha and Sarita or the Shilpi or Savitri never deeply think the tragedies of the Maududa or Poonam. The daring evils in that society and the jitters in the Love Jehad only invite a tragic end of every dream, when the truth of Islam is unveiled to them.

But the Bengali Hindu girls are mostly uncared, mislead, and spoiled.

Writer can be contacted at ramaroy.111@gmail.com

Posted by Bengal Spotlight at 8:48 AM No comments:

Labels: Court convicted four for 12 years, Danger of going to marry a Muslim, Dowry, Torture upon Muslim women by her husband, Uluberia Court 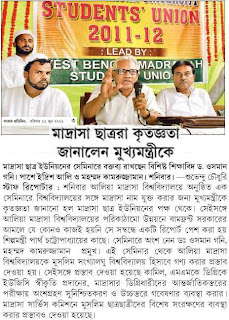 The newly elected West Bengal Chief Minister Mamata Banerjee (read Mamtaz Banoo Arjee) has said the state government has decided to give recognition to over 10,000 unrecognized Madrasas in the state.
"We have decided to recognize over 10,000 hitherto unrecognized Madrasas in the state," the chief minister told reporters at the state secretariat. She said that the Madrasas, once recognized, would be eligible to receive central grants under various schemes.
The new state government has already decided to rename the Aliah University as Aliah Madrasa University.

It is a Red Alert for all the Hindus of West Bengal. Because All India Trinamul Congress (AITC) is going to approve or to give easy recognition to these 10,000 Terrorist Manufacturing Industries (Read Madrasa) as soon as possible. By the new declaration of Mamtaz Banoo Arjee (Read Mamata Banerjee) the Islamist in West Bengal will get a tremendous impetus to establish Madrasas here and there. The recognition of which are not any impending thing anymore. The other fact is that the huge amount of “DESTROY INDIA FUND” from ARABIAN COUNTRIES will be available for all these Madrsas, part of which will be utilized for the party fund of Mamata’s party AITC and Sonia’s Congrss as well. This will surely help to destroy ALL THE BENGALI HINDUS.

In these Manufacturing units of Jehadi Terrorists (read Madrasas), QURAN is a must read.

Quran is Terrorist Guide Book, which is taught at the Madrasa with top most veneration and endless priority. Now, please see below some sample of Terrorism in Quran:

Allah instills terror in the heart of Kafirs (Hindus and non-believers): 8/12

And many more for hatred, intolerance and inhumanity in the Satanic Verses of Quran.

PLEASE READ THE ABOVE MENTIONED SURA & AYAT IN QURAN.

By the by, Mamtaz Banoo Arjee is also going to declare Urdu as second language where the 10% Urdu spoken Muslims reside anyway. The establishment four campus of Aligarh University in West Bengal are also in priority considerations of the newly formed West Bengal Government with 20% reservation for the Muslim brethren of Mamta Banerjee. The Govt. is also thinking of a good package for the Imams and Muazzins of all the Mosques to ensure a Muslim Bengal in West Bengal to drive away all the Hindus from here just like Taslima Nasrin.

After taking the charge, the then Chief Minister of West Bengal, Buddhadev Bhattacharya questioned the role of Madrasas along the state borderline with Bangladesh for suspected spouting of cross-border terrorism for which he was damagedly criticized by the fundamental Muslim pressure groups within CPIM and other political parties. Mamata Banerjee is now making an ideal situation for Muslim Bengal with a great dedication by kicking ruthlessly upon the face of Bengali Hindus in West Bengal.

Posted by Bengal Spotlight at 1:57 PM No comments: