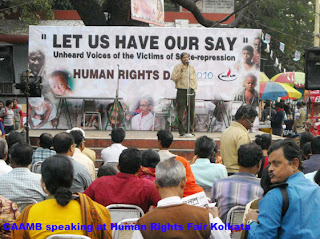 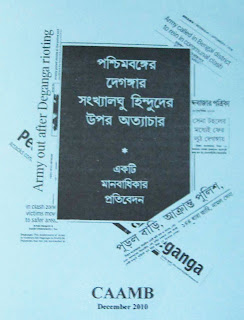 CAAMB (Campaign Against Atrocities upon Minorities in Bangladesh) participated in Human Rights Fair on 10-11 December 2010 at Kolkata Academy of Fine Arts complex and put up its a stall. CAAMB stall like last year was most popular and mostly visited. People hardly has a chance to see this kind of stall displaying books of Muntasir Mamun, Salam Azad, Shariar Kabir, Taslima Nasrin, all the writers from Bangladesh advocating the rights of minorities there and voiced the humane thread of Bengali Culture and the BHBCUC publications in Kolkata. Also CAAMB's publications were there. The newly released booklet on the Assault on the Hindus in Deganaga in West Bengal (Paschimbanger Degangar Sankhyalaghu Hinduder upar Attyachar) was well received. This is the Bengali version of the original report on Deganga as prepared by CAAMB, which was first published in October, this year. CAAMB's representative also addressed the gathering. There were several stalls of different organizations concerning Human rights issues, Gender issues, Environmental issues etc. It was quite a successful event for CAAMB.

Unbiasedly, CAAMB have been fighting against the Islamic threat perception throughout Bengal, whether it is East or west, where the aggressive Islam in action to jeopardize the free thinking o any free and civil society. The organization is very much engrossed with the civil rights activities and consequently surfaced the strangulated situation of the Deganga Hindus after its victimization due to the perpetrated communality and persecution to the minority Hindus by the motivated Muslims there to do so. The 'Report on Deganga' by CAAMB has been successful to articulate the truth of Hindu persecution there in view of the acceptance for the same by the Bengali Intellectual Forums.
Posted by Bengal Spotlight at 12:23 PM 2 comments:

Kolkata, West Bengal Safe Haven for Terrorists. Safety and security of the common people are at stake.

Calcutta High Court concerned about the security of common people affected by the terrorist activities in West Bengal, hinted as “Safe haven for the Terrorists”. 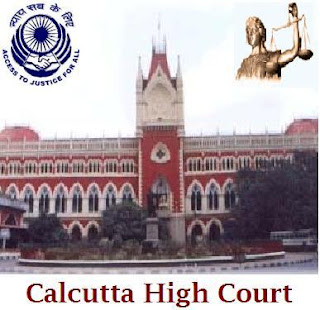 A division bench of the Calcutta High Court, comprising Chief Justice Jay Narayan Patel and Justice Asim Kumar Roy, has asked the West Bengal State Govt. to file an affidavit in three weeks clarifying why the senior police officers were not ready to accept the National Police Commission guidelines framed by Justice Savarwal of the Supreme Court, in the matter of security surveillance. The bench directed the state to clarify what had prompted it to remain silent about the officers’ reluctance.

The bench of Chief Justice also criticized the reluctance of the State authority for the incapacity to protect the general security for the tax payer common people against the terror threat perception gaining potency day by day in West Bengal, while giving much importance to the security for the political and other high profile personalities.

One Jaswant Rakshit had filed this PIL, alleging that Kolkata Police lacked modern equipment and infrastructure and the constables were recruited against bribes to senior officers and a good number of vacancies always existed in the force. It claimed that police had allowed the Kolkata city to become a haven for terrorists.

The bench of Chief Justice J N Patel had earlier directed the government to declare how many vacancies now exist in both the city police and state police. The government submitted a list showing about 30% police posts were vacant.

When the matter came up for hearing on Friday, Dec. 3rd 2010, the Chief Justice asked state Advocates General Balai Ray why the state failed to implement Justice Savarwal's recommendations. Ray said the report could not be implemented due to objections raised by senior police officials.

Ray was then asked who called the shots the state government or police officers. The court also observed that the large number of vacancies rendered police inept at doing their job.

Farook M Razzak, the additional solicitor general of the Central government, told the court that while the Centre had constituted National Police Commission and its recommendations were implemented by a few states, Bengal did not follow suit and instead set up its own police commission.

The counsel, Subroto Mukherjee for the petitioner claimed that because of the shortage of policemen, the safety and security of the common people were at stake.

Mukherjee said in the PIL that the Bengal government had not introduced NPC guidelines for modernizing the state’s police department.

“As a result, the progress of investigation in various cases is suffering badly,” counsel for the petitioner claimed. “The investigating officers cannot submit charge-sheets within the stipulated period of 90 days and criminals are getting released on bail from courts”, as Mukherjee submitted to the court.

After hearing Ray and the petitioner, the court directed the state to file an affidavit and fixed January 21, 2011 as the next date for hearing.

Posted by Bengal Spotlight at 11:54 PM No comments:

"We are not to bother any rules and regulations, what's the meaning of Judiciary ? We will throw even Mamta Banerjee pulling her legs into Ganga" - The Voice of Islamic Bengal.

In two uploaded video clippings in You Tube it is clearly seen that the Bengal Islamic people led by the Three Musketeers of Jihad war viz. Nurar Rahaman Barkati (Imam, Tipu Sultan Mosque, Kolkata), Md. Idrish Ali ( President, All India Minority Forum) and Taha Siddiqui ( Peerjada of Furfura Shariff) are now turned dare devil in connection with the issues relating to Ban on Cow slaughter by Hon'ble Calcutta High Court, the status of Muslims in the State of West Bengal and obviously reservation of Muslims in employment and politics.

In retaliation to the recent Calcutta High Court order on Banning Cow Slaughter in Bakri-Idd, Barkati and Idrish Ali challenged the Judiciary and the Polity as well in a Islamic press conference that they have no botheration with any court order as such. They will continue cow slaughter with their muscles and man power and nobody cannot be spared if checked Qurbani which is the rights of Muslims connected with their religious faith. Both of these infamous Muslim leaders played a key role to oust eminent writer and poet, Taslima Nasrin from Kolkata on a conducted mini mayhem in Kolkata in 2007 due to a rioting in Kolkata in Nov, 21st, 2007. Before that this Nurar Barkati announced an lucrative amount publicly to slain the humanist writer for her alleged anti Islamic opinion. Nurar caught the headlines in the Bengal newspapers in another Islamic propaganda by crippling the public life for nearly a week in the area of Esplanade (Dharmatal) in a retaliation of a reprint of an article of Johann Hari [Why should I respect these oppressive religions?], in The Statesman, Kolkata edition. Then Barkati's men rampaged the office of Statesman to imprint the way of their protest in a very pure Islamic way.

But the spearheading Islamic Jihadist Peerjada Taha Siddiqui went to that extent of fantasy to threat Ms. Mamata Banerjee, now the symbol of change in West Bengal as well as the Railway Minister in the Central Govt. for throwing her into Ganges (read the Bay of Bengal), if she does not keep her words for Muslim appeasement.

From above, it is clear that the Bengal Muslims are never happy with the Left regime in Bengal over 34 years. And they will not be happy with the presumed TMC led Govt. in near future. Only a Muslim regime in West Bengal can satisfy their appetite of Pan Islam here and everywhere.

The viewers of Bengal Spotlight may see the related videos now. A net-transcription of the speech is likely to be published here, if requested.

~ Input from Sambuddha Gupta, [sambuddha.gupta@gmail.com]
Posted by Bengal Spotlight at 11:38 AM 2 comments: