Kolkata Muslims only for Palestine Not for Mumbai Victims,.. The Bengali Muslims want to slay Johann Hari or Taslima. 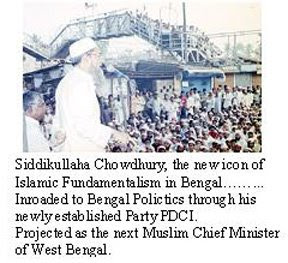 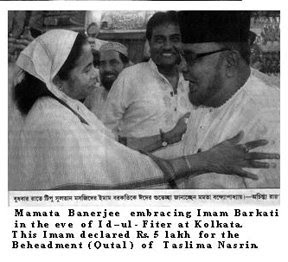 BY A STAFF REPORTER

The heart of the city was clogged for four hours on Tuesday, but no one really cared.
No one apart from the hundreds of hapless commuters caught between belligerent protesters determined to create maximum traffic chaos and a paralysed police force doing precious little to unclog the arteries.
On Wednesday it happened to be a protest meeting by around 5,000 Jamiat-e Ulema Hind supporters, but on other days it hardly takes a handful at Metro channel — opposite Metro cinema — to hold the city to ransom.
All because the law that debars a thoroughfare from being used as a protest platform is not enforced.
Why? Because no one in this city really cares.
The rulebook allows Lalbazar to sanction rallies near Shahid Minar, that too after the organisers have obtained a no-objection certificate from the army which is the custodian of the Maidan area.
But 20-24 meetings are allowed to be held every month in Metro channel, ensuring maximum effect with minimum effort for protesters seeking to disrupt traffic and grab attention.
From 10.30am on Wednesday, supporters of the Jamiat-e Ulema Hind started descending on Metro channel from the city and the districts.
Their agenda? Protest the policies of Israel and punish the Calcutta commuter.
The cops at Esplanade caught napping by the “unexpected turnout” were outnumbered and outwitted by the protesters who soon overran both flanks in front of Metro cinema and paralysed traffic at the vital intersection.
“We had no clue so many people would come for the rally. We had no option but to barricade several approach roads, causing traffic snarls on Chowringhee, Red Road, SN Banerjee Road, Lenin Sarani and Central Avenue,” admitted an officer on duty.
With nothing official about holding a meeting in Metro channel — after all, no official permission can be given — an organisation normally checks with the office of the deputy commissioner of police (headquarters) whether the venue is free on a given day. Then, details of the meeting are sent to the police headquarters, which in turn is forwarded to the Special Branch of the city police where a rough estimate of the turnout is calculated. Based on that, police arrangements are made and traffic diversions planned.
A senior police officer blamed Wednesday’s traffic chaos on the protesters holding a sit-in-demonstration on both flanks on Chowringhee.
But why clog Metro channel? Why not, countered Siddiqullah Chowdhury of the Jamiat-e Ulema Hind. “If Biman Bose and Mamata Banerjee can hold rallies here why can’t we?”
Which brings us back to the basics — why don’t the police take action against Metro channel marauders?
“We can take legal action against those obstructing a thoroughfare but we don’t because even the ruling party is guilty,” an officer admitted.
After all, no one in this city really cares.
Source : The Telegraph, Kolkata, 29/01/2009.
posted by Bengal Spotlight.
Posted by Bengal Spotlight at 11:59 PM

This is areal ridicule how these people live here, eat here, breathe here and cry for Palestine, where as in the same country Indians are killed by Pakistanis they are silent. Why these leeches don't go to Palestine or even Pakistan? What worth are they contributing to India? For these muslims some good muslims (muslims who are good human beings) are also generalized. And our illiterate, corrupt and thief politicians just want vote and power and money without contributing a single penny, by sucking our tax paid money. Shame on our state, shame on our nation.

Where is sucularism?and West Bengal claims to be the most secular state and have high secular values.Shame on this Pseudo Secularism status of West Bengal.Actually the rulling party and the opposittion party both are too much coward , timid , opportunistic and Pseudo Democratic Pseudo Secular that they cannot stand against this daylight truths , they will loose the hot seat of governance.

May b Dipanjan sud find urself a better state 2 live...or else may b u ll end up all the miseries lying here...ur shooting here n bombarding ur communal feelings...did u ever try to do sumtin for d betterment of our nation or at least for d mumbai victims ?
Pakistani killed many Indians ...did u do sumtin 2 consolidate dem...i dnt thnk so...instead creating a nonsens thread here lik dis...

i dont have any problem wit U...But i really hate those who instill n motivates communal feelings inside foolish people lik U...