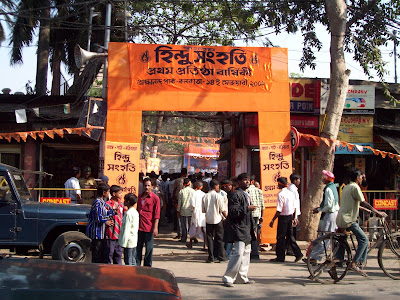 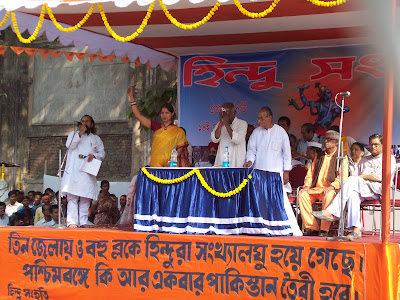 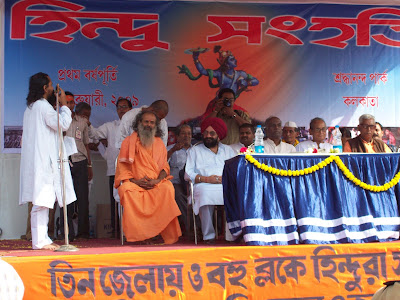 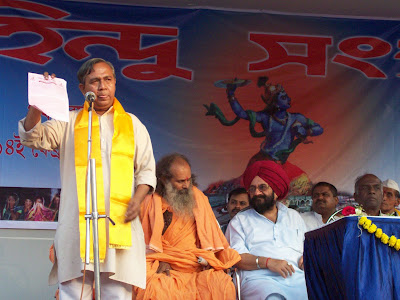 .......Spectacular Show of Hindu Samhati in its 1st Anniversary


Near 8000 Hindu activists gathered in Shraddhananda Park, Kolkata on 14/02/09 to observe the 1st Anniversary of their Dearest Organization HINDU SAMHATI. The over-crowded park perhaps never seen such a vibrant and youthful congregation of Hindus in its past. The participant activists came from all the corners of South Bengal and even from Malda in Northern side.

Though this Park has been named after Swami Shraddhananda, the great preacher and martyer of Arya Samaj, there is no statue of Revered Swamiji and as such the activists of Hindu Samhati (HS), placed one big oil painting of Swamiji with high adoration with a portrait of Bharat Mata in the appropriate position in the ground. The ailing Swami Shraddhananda was murdered in Delhi on 23rd December ,1926 by a Muslim goon named Rashid came from Lahore. The distinguished guests and the dignitaries offered flower petals to Bharat Mata, Swami Shraddhananda and Netaji Subhas Basu and lightened the ritual lamp as mark of opening of the function.
Over four hours span , the guests and dignitaries overwhelmed the audience through their valuable speech concerning various issues before Hindu Society. Sri Mithun Nath from Slichar, ( Hindu Jagaran Manch), Sri Sailendra Jain from Delhi ( Bajrang Dal ), Sri Vinod Yadav from Vaishali ( Go Raksha Manch), Dr Sarjit Singh Dang from Lucknow ( Rashtravadi Morcha), Sri Dinesh Tyagi from Delhi ( Akhil Bharatiya Hindu Mahasabha), Swami Tejasananda Adhyaksha, Tapeswari Mutth , Burdwan, Brahamacharini Smriti Devi, Bharatmata Mandir, Nadia and Swami Adwitva Das Prabhu, ISCKON were the speakers to rejuvinate the Hindu people came together for the function. The main attractions were Sri K. N. Govindachrya and Sri Tapan Kumar Ghosh, the present icon of Hindu Resurgence in Rural Bengal.

Detail report and the resolution etc. confirmed in that Hindu Assembly will be shown in this blog very soon. 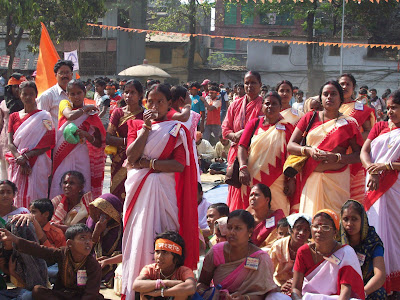 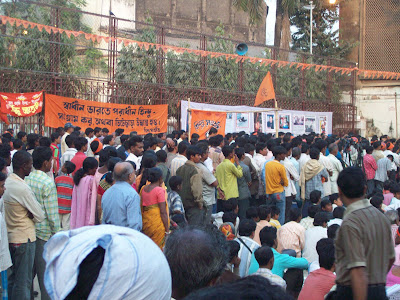 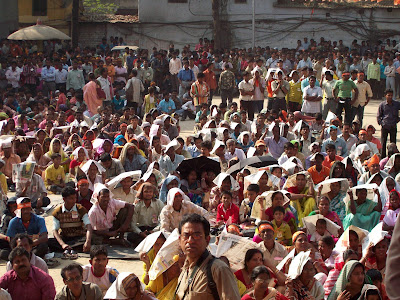 
Hindu Samhati is pleased to declare the Public Rally organized on the occasion of the 1st anniversary of its foundation, a success. The rally was held at Shraddhananda Park on the 14th of February, 2009. About ten thousand people from different places participated in the Foundation Day celebration in Kolkata.
The rally was addressed by Tapan Kumar Ghosh, President , Hindu Samhati and K.N. Govindacharya, Convenor, Rashtriya Swabhiman Andolan, among a bevy of other notable speakers.Tapan Kumar Ghosh , in his speech emphasized that in this very city of Kolkata, Siddiqullah Chaudhury, Barkati, the Imam of the Tipu Sultan Masjid of Kolkata had openly and in front of the press threatened the life of the notable Bangladeshi author Taslima Nasrin and had even declared a huge financial reward for anybody who kills her. Under Indian criminal law this is known as incitement to murder. However, under this dire provocation this State Government sat pretty took no steps to arrest Imam Barkati.
However, when a famous daily of this city , The Statesman, reprinted an article criticizing Prophet Mohammed – which had originally appeared in another famous international daily, The Independent – the editor of The Statesman was arrested. The reason given was “ it had hurt the religious sentiment of the Muslims” as the Muslim goons of the Jamiyat-e-Ulema-e-Hind disrupted public life and attacked shops etc.
Hindu Samhati condemns in the strongest possible term, this shameless capitulation of the West Bengal Government before the threat of Islamic fundamentalism. If this sort of spineless pandering to the Islamists continues there would soon be a ‘Dhantala’ in every village. And West Bengal might well become a part of greater Bangladesh.
Sri Govindacharya, in his speech said the Nation is facing the challenge of communalism, separatism and anarchy. The Indian State is failing and politics is succumbing to minoritism at the expense of national interest and identity. So, when the state fails, the society takes over the functioning of the state to protect its identity and interest.
The other speakers also pointed out the looming spectra of Islamic separatism and the weak capitulation of the Indian Government before it bowed ill for the future.

This is threatening in the land which proudly proclaim sof progressive thinking.very interesting report