Reactions of Fanatic Muslims In Kolkata. 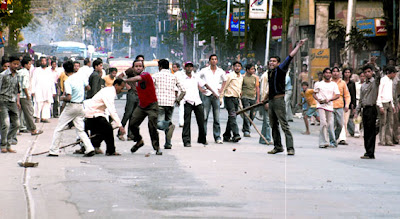 .............................................
Johann Hari Please write Directly to .......................
The Statesman, Kolkata
Since the article under the banner, "Why should I respect these oppressive religions?" has been published also in The Statesman, Kolkata Edn. on 05/02/09, the illegal Bangladeshi Muslims are trying to establish their strength of criminality through a repeated road show along with their urdu speaking counterpart.
.
This is not a new thing to Kolkata civil soceity as the same frenzy people deadlocked the Kolkata Life Line over the issue related to the extermination of Dr. Taslima Nasrin, the humanist writer of Bangladesh who took her shelter at Kolkata being driven out from her Motherland 'Bangladesh' by the same muslim fundamentalist. It dates back only to 21/11/2007.
.
Earlier, such fundamentalists have issued various 'fatwas' against Salman Russhdie or Anwar Seikh or to many others for their capital punishment, very much sanctioned by some brute and blind followers of Islam.
.
But it is shocking to say that no columnist in the Statesman group articulated nothing against the wrong side of the miscreant muslims in Kolkata. Even they reported the matter very reluctantly without pointing the misrule of the local Govt. to control such situation and the apathy of all the political parties aspirant of muslim vote bank.
.
As a result of that the muslim hooligans and the 'Jehadi' young forces are making its trailer in Kolkata to produce a full length film like Great Calcutta Killing in 1946. We are giving our full support to make it very easily as we are not conveying our full support in favour of our right to express our opinion supporting civilization, liberty and equality. In most of the cases we fear the fundamentalists than to support the oppressed. We should justify the history of torture and oppression caused by both Islam, Christianity or any semitic religion in many ways. If we love humanity or honour the freedom, we should condemn the fundamentalists in Kolkata, Karachi or any where.
.
I request J. Hari to send his reactions directly to The Statesman, Kolkata over the issue...''Why Should I respect.....?" I really interrogate myself, WHY SHOULD I RESPECT ISLAM ?