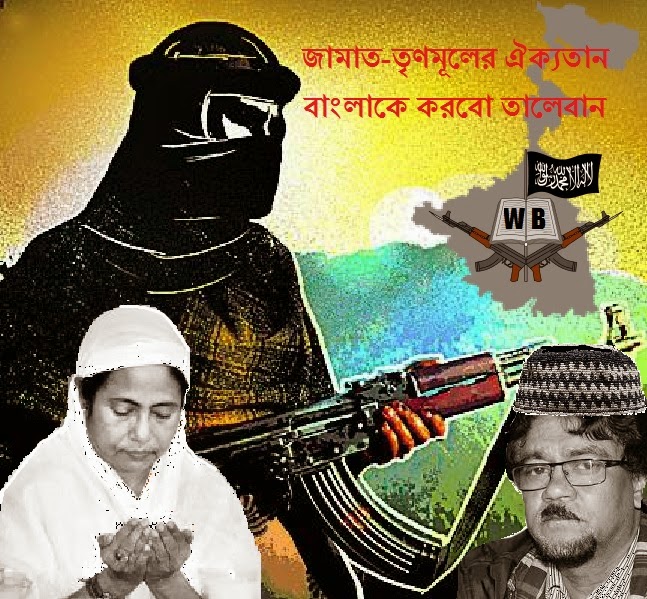 Ever since the National Investigation Agency has been ordered to take up the “accidental” Burdwan blast, news about unearthing of terrorism-related cases in different parts of the State are flooding the media .Not only the investigating police are being attacked to prevent them from proceeding further, Jamaat-led elements have also turned violent in protest against investigation by the central agency. Apart from destruction of vital forensic evidence by the State police, even the State-controlled hospital refused cooperation.

Assessing the level of security threat caused by this state of affairs, the Director General of National Security Guard went on record emphasising on the larger all-India dimension of the fall- out. Further, in addition to the Director of NIA, the gravity of the situation is drawing the National Security Adviser and the Director, NSG, to the State, as reported in the press. The investigation so far has given out distinct indicators that the overall situation has international dimension. India seems to be getting drawn into the vortex of international terror scheme.

The readers will in this connection recall that the Al Qaeda has recently re-iterated its focus on India in their current plan for South Asia. The enthusiastic response from some section of Sunni Muslims to the declaration of the Caliphate is not to be lost sight of in this backdrop. Cases of "love jihad" have registered growth in Kerala and Tamilnadu.

Friends, in the midst of all these, we now see a front page box news in "The Asian Age" of October 25, titled, "58 Terrorist Cells Active (identified?) In Bengal—Jamaat link to Burdwan", as follows:

In a sensational revelation, intelligence agencies and the National Investigation Agency told the Centre that at least 58 terror modules are active in West Bengal, most specialising in making IEDs. A status report on the investigations into the Burdwan blast also states at least 180 Bangladeshi nationals who managed to sneak into India in the past few months were part of these terror modules, and belong to the Jamaat-ul-Mujahideen.

Intelligence sources said it was in the backdrop of these sensational revelations that NIA director-general Sharad Kumar visited Burdwan on Friday and took STOCK of the investigation into the blast and the Jamaat’s vast network.

The agencies also identified the two masterminds, Anisur and Mufazzal Hussain, responsible for setting up the Bengal modules. Sources said both are Bangladeshis and there is a possibility they may have fled to Bangladesh. Unquote (.)

Yet another report has been received that about 800 bombs have been recovered from a government health centre. If we hold on, more such reports will continue to pour in. For example, another report says a tunnel has been found leading to a madrassa. Even any casual observer of the West Bengal scene will be compelled to believe that bomb-making has become a highly profitable industry/business in the State. People believe all this is within the knowledge of the State Chief Minister. Even if a part of this is true, which seems likely, one feels she has been playing a rather dangerous and risky game.

There are also indications of communal passion being aroused, taking advantage of the fact that the accused/suspects are all Muslims. Some small incidents have already been reported also. All aggressors have again been from the minority community. The "Didi" must be fully seized with this. If this aspect of the situation is ignored, communal riots on bigger scale will be avoidable but concomitant by-product.

Dear, friends, do all these mean that West Bengal has become the "Terror Hqr For India" instead of Bangladesh, as originally planned? The "friendly" government in power in the State, the solid support from across the "border", suitably pliable administration, the "homely" ambiance and no resistance or even semblance of protest to boot from the rest of the sleeping majority in the State, who "may" one day wake up to be butchered in deep slumber, seem to be providing the ideal backdrop with all the ingredients needed for success.

Friends, we live with the hope the intelligence and other related security agencies are on their job to ensure security and safety of the State and of the nation as well. Let we, the people of India, repeat and honour our pledge as per Art. 51A, after the "Fundamental Rights", namely, the "Fundamental Duties". Are we sounding unfamiliar to some? We hope not. In any case,it may be good to refresh memory at times.

The people of West Bengal will have to rise above the mess described, to save themselves unless they wish to take a heavy dose of sleeping pills for eternal peace. Well brothers and sisters of West Bengal, we are nobody to pontificate. This is only our sincere warning for whatever worth it is to you. Sleep not any longer. Are you going to prove in the most negative way what Mahamati Gokhale had once told about the Bengalees. We hope not. Despite such ominous developments, we are and would remain optimist till proved wrong otherwise.
The writer can be reached at
dcnath.office@gmail.com
Contact: 09811995693.

Posted by Bengal Spotlight at 4:47 AM No comments: 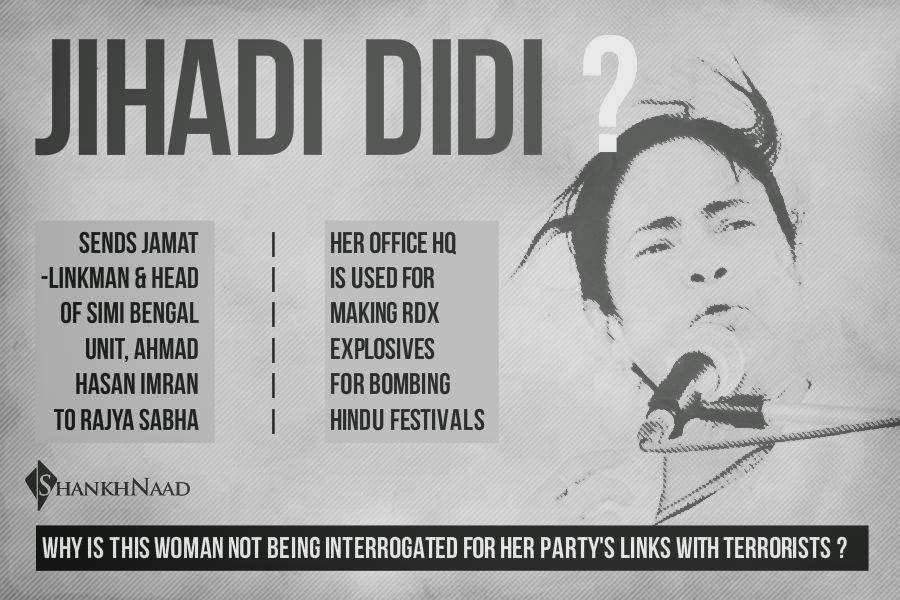 On the day of Gandhi Jayanti, 2 Indian Mujahideen Jihadis were killed and a third injured critically in West Bengal's Burdwan town.

◉ How ?
They were making IEDs for their RDX explosives when it blew up.

◉ What happened when police arrived ?
two women held them off at gunpoint threatening to blow up the house. Bengal police waited politely while the women burnt several documents and vital evidence (instead of tending to their blown up husbands).

◉ What was found after the Jihadi women were overpowered?
Documents and incriminating evidence (linking them to Al-Qaeda and Indian Mujahideen), 55 IEDs and RDX, electronic equipment, maps and SIM cards along with some half-burnt Arabic books

◉ What did Bengal police do with evidence ?
promptly destroyed ALL of it before central investigators(NIA, IB and other central agencies ) could arrive.

◉ What was the plan ?
Blasting away devotees on Dussehera, using powerful RDX explosives
-------------------------------------
TMC is already under police scanner for multi billion rupee Shardha Scam where TMC MP Ahmed Hasan Imran was found to be financier of Bangladeshi terrorist outfit Jamat-e-Islami.

Last month, Al-Qaeda had warned of 'jihad' in India. A warning which Indians took very lightly.
Let's enjoy the borrowed peace while it lasts.

Posted by Bengal Spotlight at 1:28 PM No comments:

Save Cow activists condemned Cow Slaughter in WB and burnt effigy of Mamta Banerjee in many States.

The Goraksha Dal, Punjub; Goraksha Dal; Haryana; Goraksha Dal, Rajasthan; Goraksha Dal, Delhi and Goraksha Dal, Odisha activist registered their protest to ban illegal cow slaughter in West Bengal with a state protection in all the districts of West Bengal by violation of regulatory acts and laws including the orders of Hon'ble courts  only for appeasing the Muslims in the states under a culpable tricks of vote bank politics.

Here is a pictorial and video-graphical report for 6th Oct to 8th Oct.. as captured from Delhi, Haryana, Panjub, Rajasthan and Odisha. 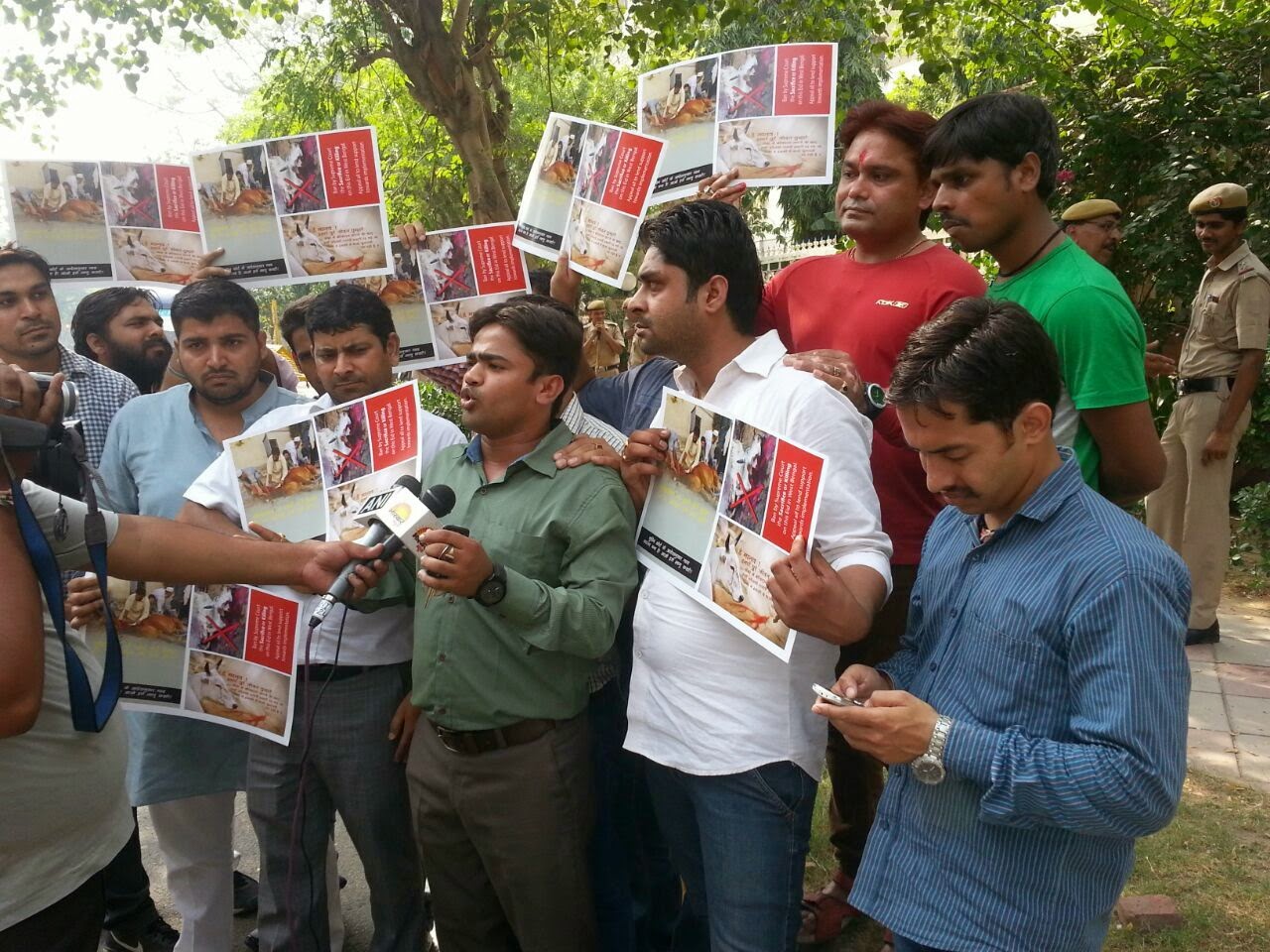 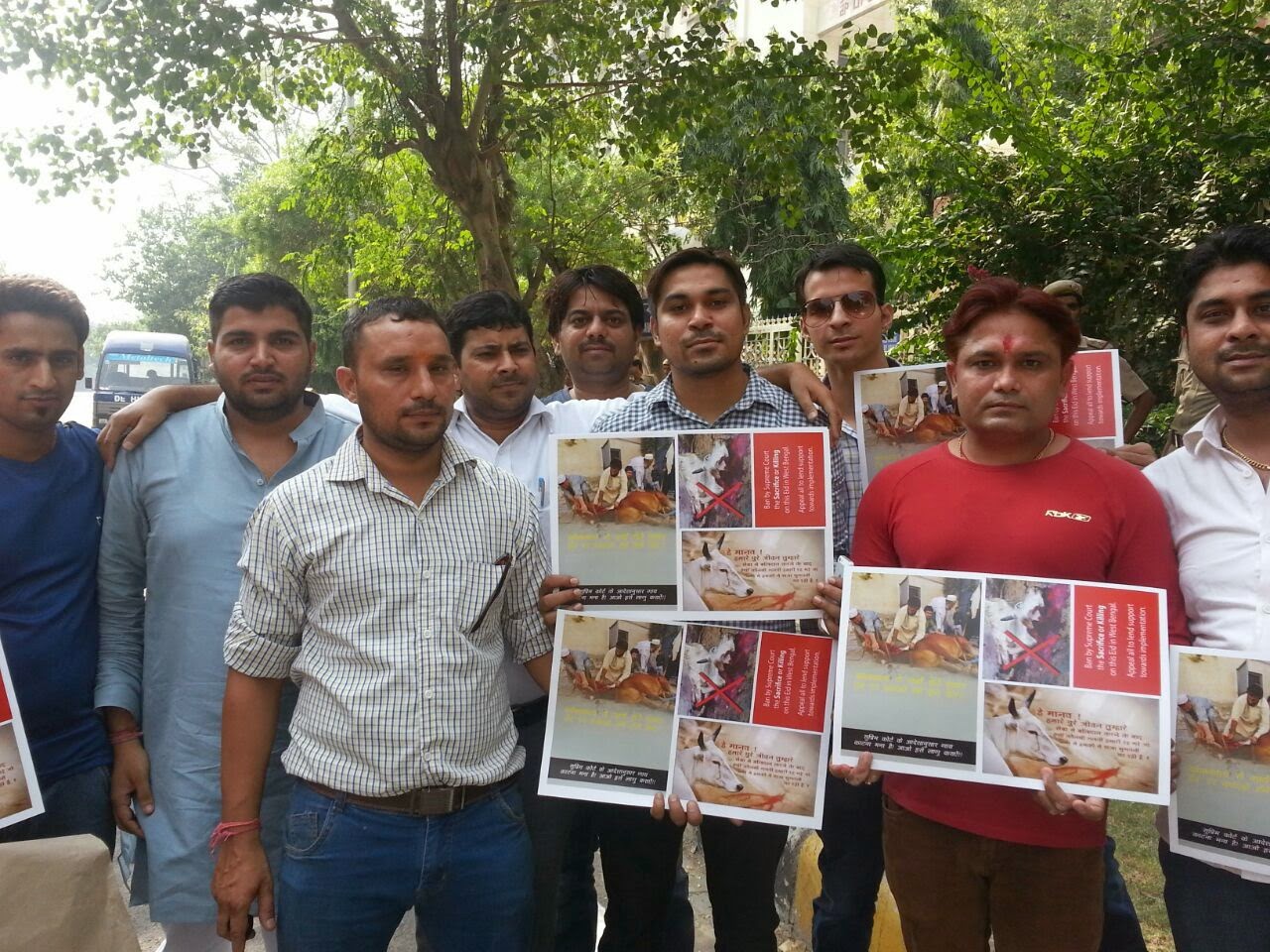 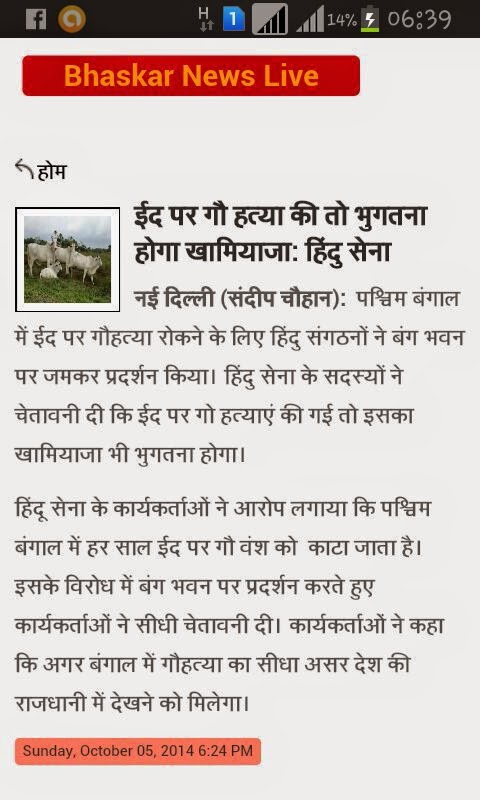 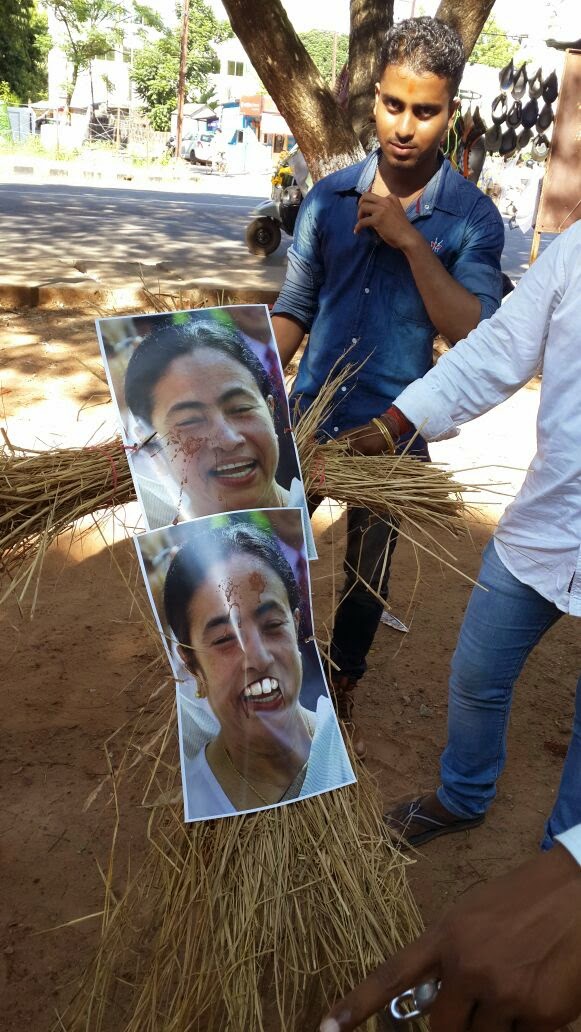 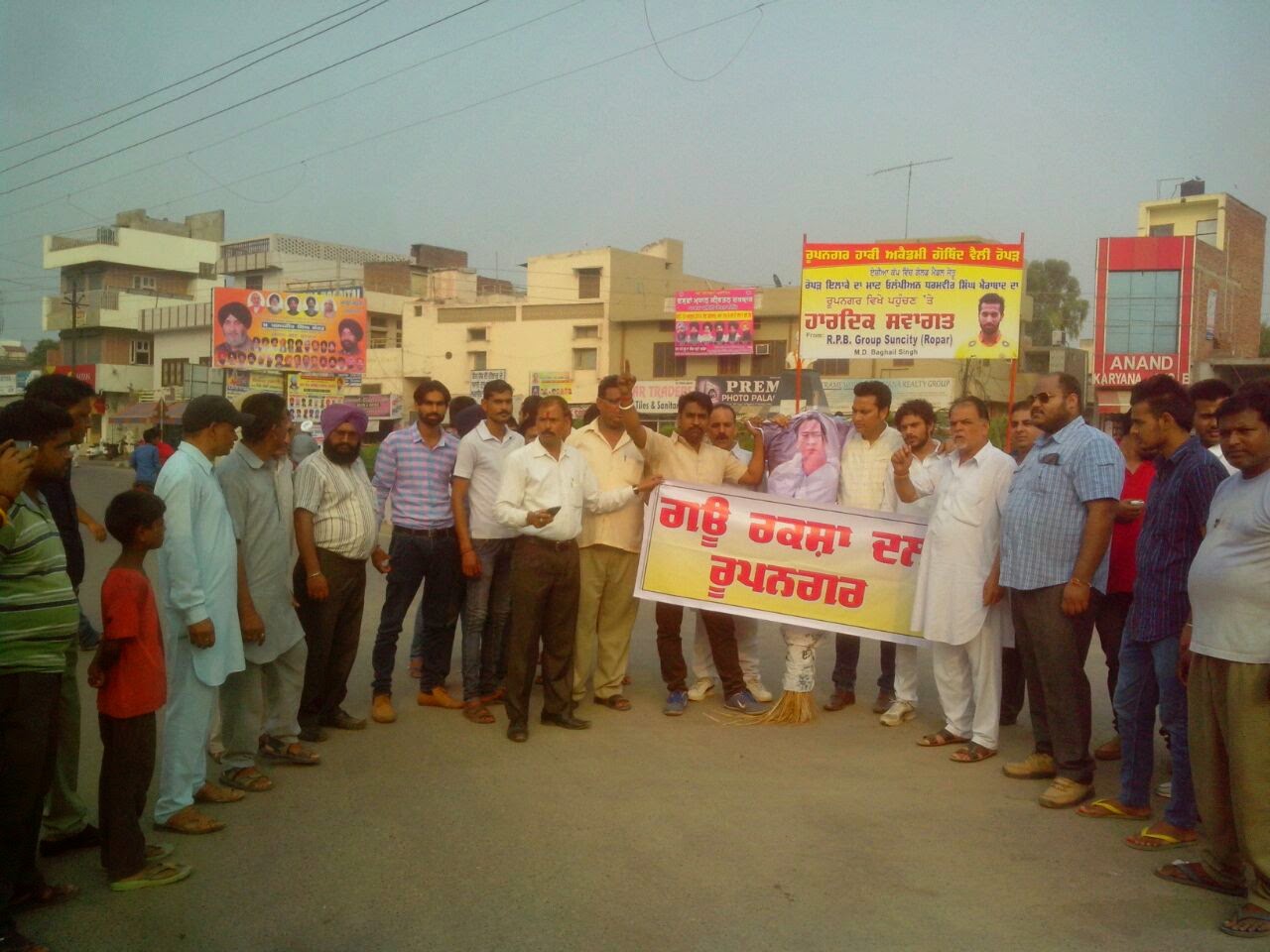 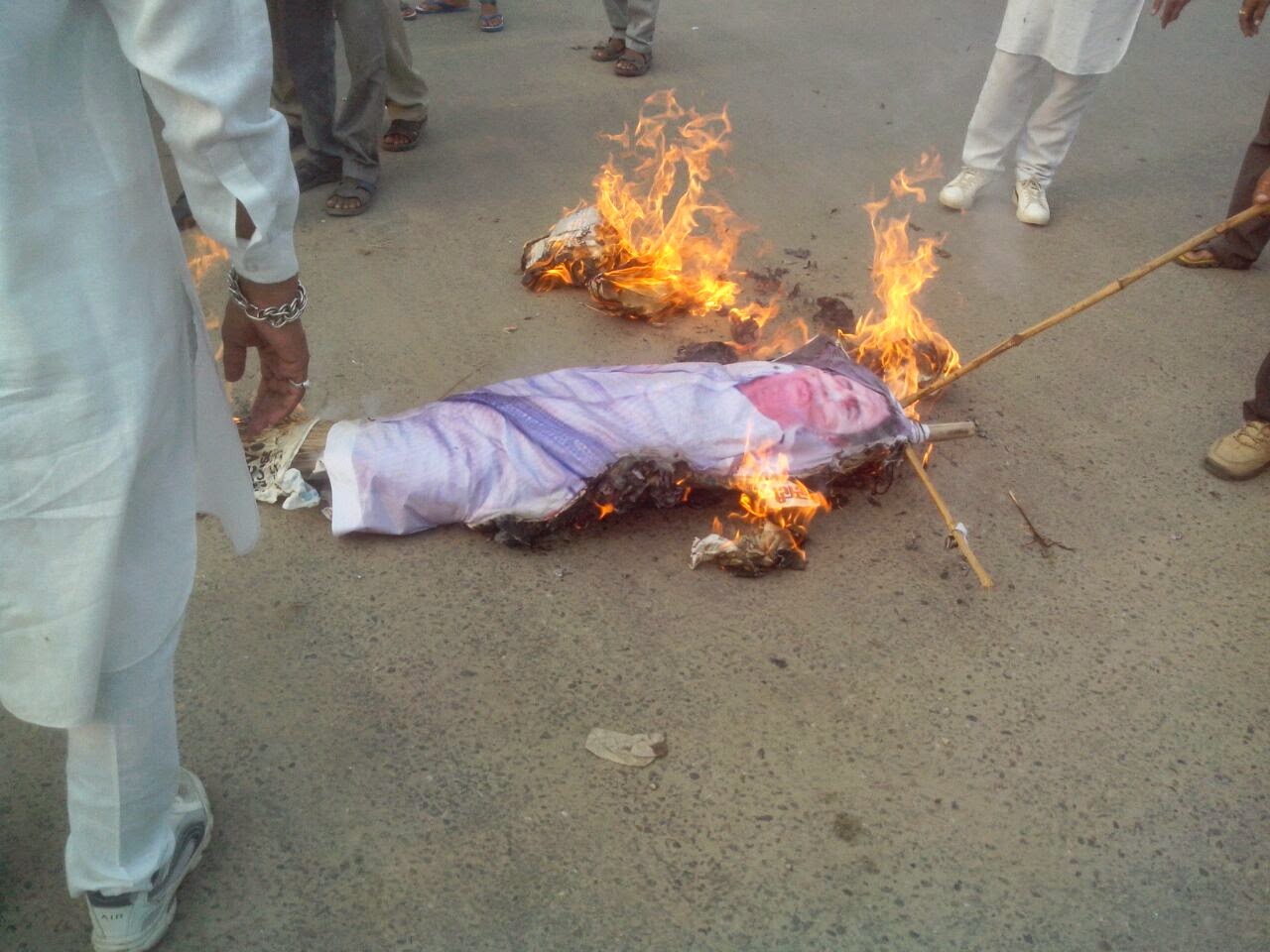 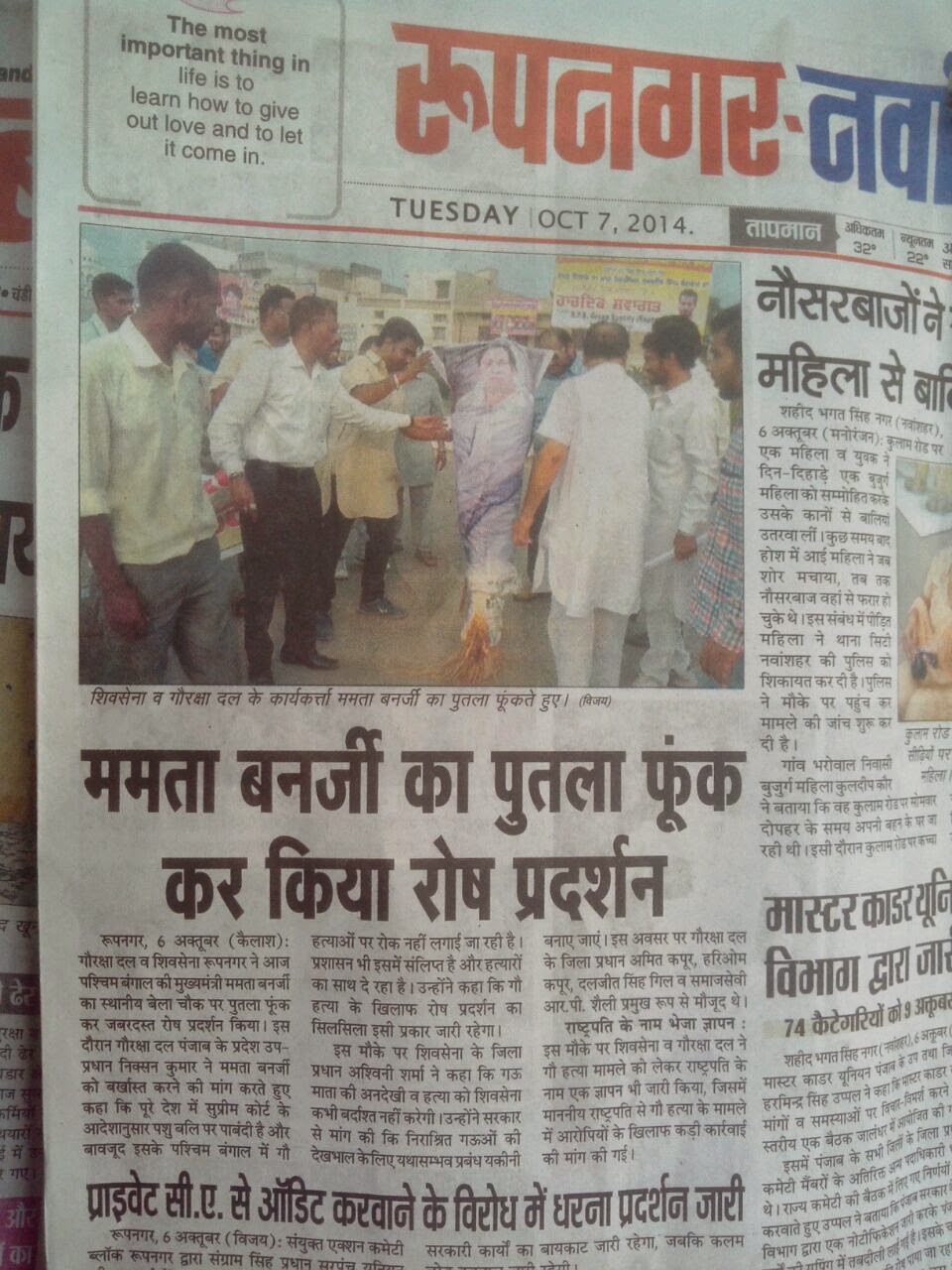 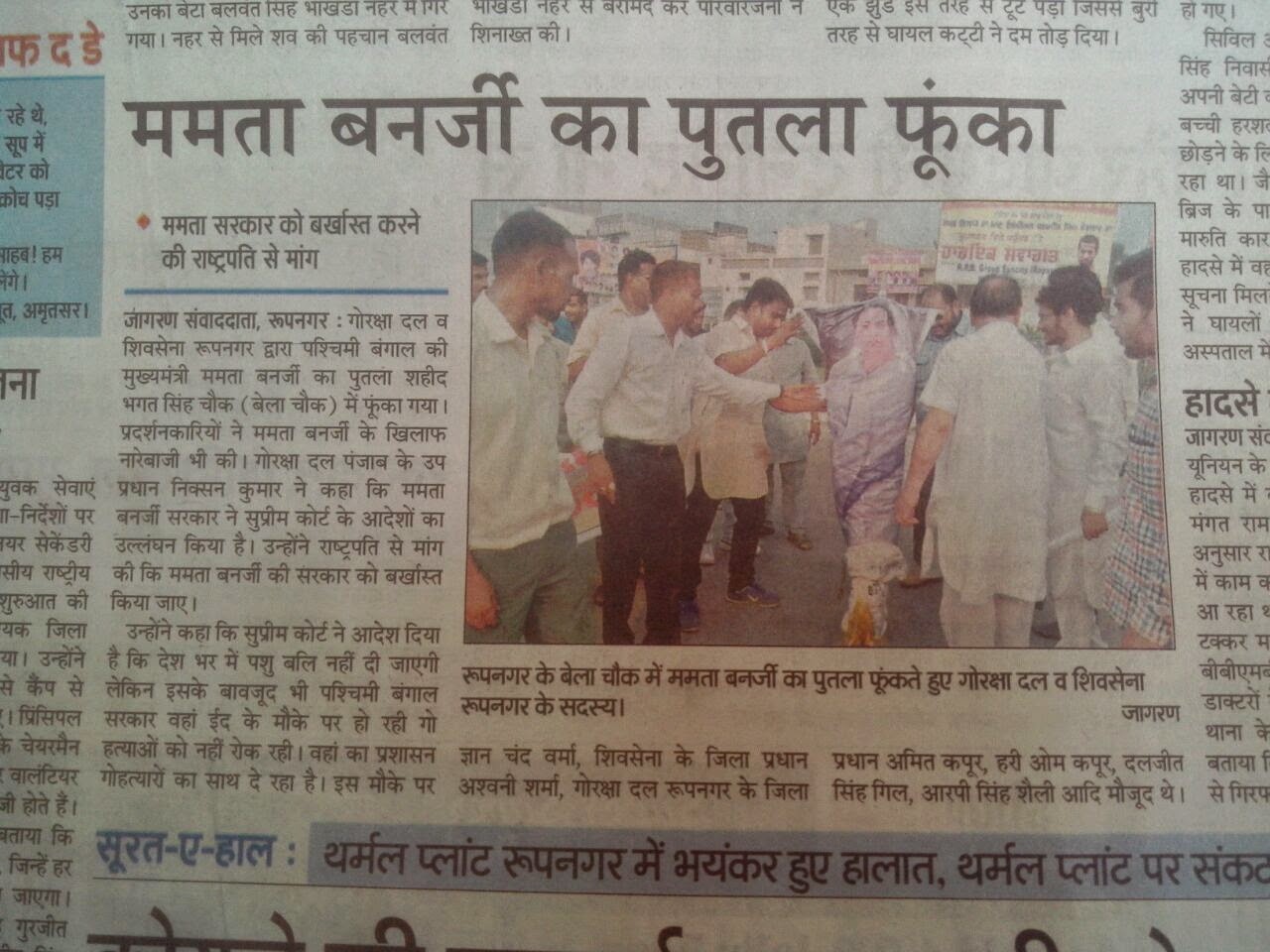 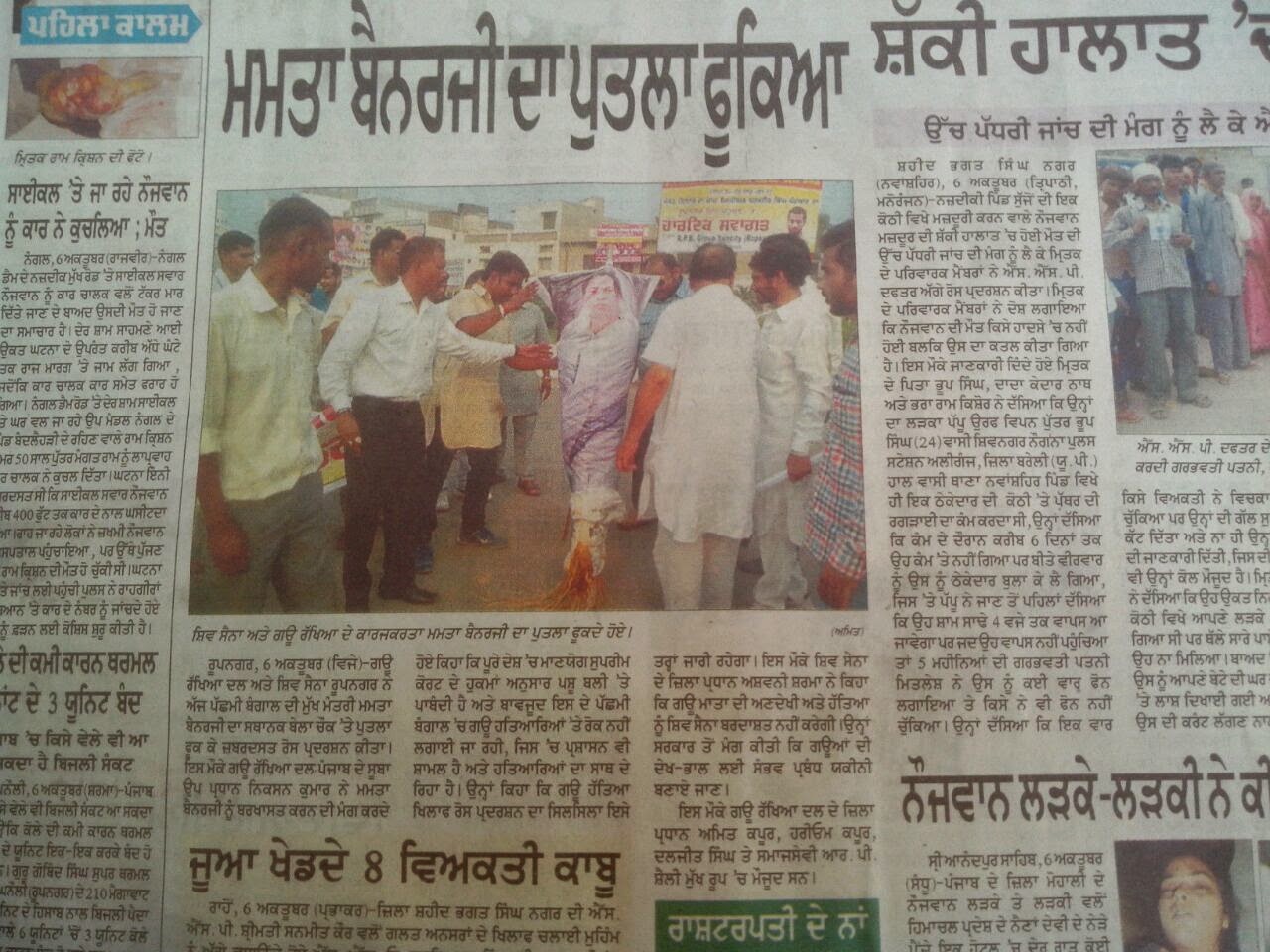 In a joint statement, Upananda Brahmachari, the chief pontiff of Goraksha (Save Cow) movement in West Bengal and Acharya Yogesh Shastri, chief functionary of Akhil Bharat Goraksha Sansthan praised the activities of all Goraksha Dal and Hindu Sena as they registered their solidarity in favour of Save Cow Movement in West Bengal to stop illegal trading and slaughter of Cows and cattle in a very large scale.

However, as per reports came in from the different cow markets in West Bengal, the prices of cattle were so high, the trading of cattle was slashed down by 30%-40% in this Eid ul Adha, the event of cruelty to animals.
Posted by Bengal Spotlight at 1:54 PM No comments: