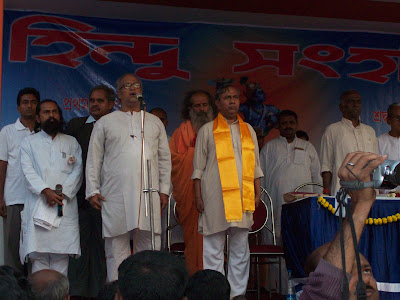 Kolkata: Hindu Samhati, a radical Hindu outfit, brought up with the support of Sri Rama Sene leader Pramod Muthalik, celebrated its birth anniversary in Kolkata on Saturday, with the speakers defending the Malegaon blast accused, Lt Col Purohit and Sadhvi Pragya Singh.
The Hindu outfit demanded “proactive action” as the need of the hour and not “soft Hindutva.” The outfit is inspired by Abhinav Bharat. Tapan Kumar Ghosh, who had reportedly been named by Lt. Col Purohit to the CBI, is the man behind the outfit.
Giving a call to all Hindus to rise, Govindyacharya, the convenor of Rashtriya Swabhiman Andolan, said: “Both the Indian and the Bengal governments have failed to save our self-respect.”
The rally, which saw the participation of Bajrang Dal activist Sailendra Jain, leader of Goraksha Andolan in Bihar Vinod Yadav, was also attended by thousands of followers.
“What he (Purohit) has done is yet to be ascertained. The telephone conversation between Purohit and Pragya is fake,” said Govindyacharya.
The outfit also arranged an exhibition displaying the pictures of alleged victims of atrocities against Hindus in Bangladesh.
The speakers also stressed on the need for Hindu politics in the nation.

Posted by Bengal Spotlight at 9:26 PM

In the Indian Express article above, there are two more lines at the end of the article that is left out of the BengalSpotlight blog:

"The outfit also arranged an exhibition displaying the pictures of alleged victims of atrocities against Hindus in Bangladesh.

The speakers also stressed on the need for Hindu politics in the nation."

The left out lines are now inserted accordigly. Thank You Hindu, for your kind comments.
bengalspotlight media team.