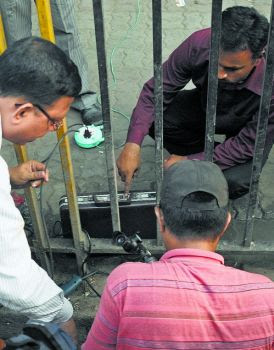 KOLKATA: The city has been put on a high alert over chances of a terror strike by the Indian Mujahideen after the police received “information from a very credible source,” Kolkata Police officers said here on Thursday.

“We have received information from a very credible source of the intention of a terror strike, which is why we want the public to be on alert,” said Joint Commissioner of Police (Headquarters) Jawed Shamim.

About rumours that Netaji Subhas Chandra Bose International Airport and the Kali temple in Kalighat might be the likely targets of an attack, Mr. Shamim said the police had not received any specific information about possible locations.

“So far we know about their intent to do something. The details of their plans, how far they have progressed, and if they have brought explosives or weapons into the city is not known,” Mr. Shamim said.

With the terror alert in mind, the discovery of an abandoned briefcase on a thoroughfare during the day raised an alarm.

However, the briefcase was later found to belong to a businessman from whom it was stolen earlier in the day.

While the city is on high alert, the Kolkata Police's Special Task Force and Detective Department are working round the clock to prevent an attack by attempting to neutralise the sleeper cells of the Indian Mujahideen in the city.

About two months ago six industrialists had received extortion calls from a person claiming to be calling on behalf of Indian Mujahideen chief Amir Reza Khan and asking them to pay up crores failing which they would be abducted.

It is possible that the extortion calls might be connected to the threat, Mr. Shamim said.

Meanwhile, the West Bengal Government has decided to step up security at all major installations in the State. State Home Secretary Ardhendu Sen told reporters at the Secretariat that specific inputs have been received on the city airport being targeted.

Asked whether the threat had come from the Indian Mujahideen, he declined to take any names, just saying : “We are stepping up security at all major installations.”

Earlier, State Director-General of Police Bhupinder Singh said most aspects of airport security like access control and security of the perimeter area were under the Central Industrial Security Force.

Responding to a question whether there was any reason at this juncture for terrorists targeting the State, hitherto considered a safe haven for terrorists, Mr Singh said he could think of no particular reason

To a question on new areas of the State coming under operation of the Left-wing extremists, he said the proximity of bordering districts like Birbhum made it easy for the rebels to make inroads into the State.

Posted by Bengal Spotlight at 1:09 AM