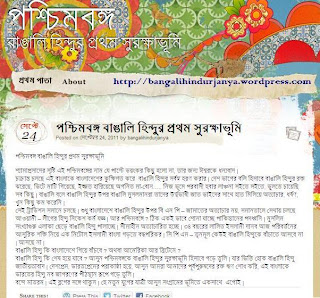 Sambuddha Gupta : Spotlight Media Center :  Kolkata :: In the jungles of blogs, it is difficult to find out that important herbs that may cure your ailment or that tree under which you can rest a while or stay in the night at safety.

No I am not advocating for this new wordpress blog in Bengali under the Caption PASCHIMBANGA : BANGALI HINDUR PROTHAM SURAKSHA BHOOMI at the url http://bangalihindurjanya.wordpress.com, but to admire the endeavor of the blogger to meet up a long felt requirement for such a blog in Bengali in the region of West Bengal, (now  renamed as Paschimbanga in English also), which can at least say something on regular basis in their own language in the web, when the Bengali media always avoid to depict the peril and persecution of Hindus by the Muslims here and there with a little chance to do so.

In its very introduction, the blogger has successfully engrossed our Bengali Hindu sentiment in a very vulnerable condition in the advent of Islamic fascism and political chauvinism in Bengal under any concept of color or  culpability only to engender the future of Hindus in Bengal. Congress, CPIM, Trinmool, Islamists all are in a row to enjoy the pitchering blood from the slaughtered body of the Bengalis as if a curse for their Hindu entity.

I must convey my endless salutation for a restless mentor, ideologue and the warrior saint for the rescue of Lethargic and reluctant Bengali Hindu clan this time, Upananda Brahmachari, whose inspiration and initiation geared up us to publish this new blog. No conspiracy can stop him. Again he is the champion to publish a Bengali blog in the field of Active and Aggressive Hindutva as a pioneer in Paschimbanga with a challenge to give a hardest fight to anti Hindu lobby in West Bengal.

We cordially expect the positive response and help in all respect from the viewers as before.
Posted by Bengal Spotlight at 7:37 AM