Islamist Mamata Banerjee is humiliating Hindus of Bakreshwar due to her Muslim appeasement policy. 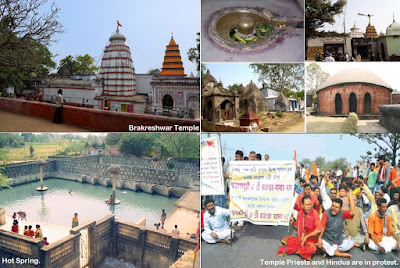 Puja stopped in Bakreshwar Temple for half day in protest of communal politics of Bengal CM Mamata Banerjee.


Samudra Gupta | Spotlight Media | Suri | January 15, 2016:: Though the State BJP demands a gate in the way named after both the shrines, one for Hindus and other for Muslim to symbolise harmony, the culpable CM of West Bengal stealthy promised to the Muslims to make it exclusively Islamic only.

The Birbhum district unit of BJP has been demanding a common gate be built on National Highway No. 60 for pilgrims to Bakreswar temple (A 1000 years old Shiva Temple connected with Shakti Peetha) and Patharchapuri shrine ( A 100 year old Majar on a Muslim Oli) in the district and named after the two famous religious places to symbolise the communal harmony.

The renowned Muslim shrine Patharchapuri falls on the way from Suri to ancient Bakreswar, a famous Lord Shiva pilgrimage site which is known for its hot-spring also. But, the appeasement policy of TMC and WB CM fuels the situation towards a Hindu-Muslim division.

It is cracked that, the Islamist CM of West Bengal has promised to the Patharchapuri Shrine committee that "No Hindu names will be included in the gate plaque" in the middle of Suri-Bakreshwar Road proceeding towards both Brakreshwar Shiva Temple and Patharchapuri Majar.

The Data Baba Majar Committee requested the visiting WB CM not to include any "Napak (unholy) Hindu name with the Pak (holy) name of Data Baba of Patharchapuri", anywhere even in the plaque of the gate under construction.

Mamata Banerjee came to Patharchapuri on 2nd December last year in Suri for administrative meeting and reached Patharchapuri Majar to fulfill her prayer for an Islamic Bengal eventually. 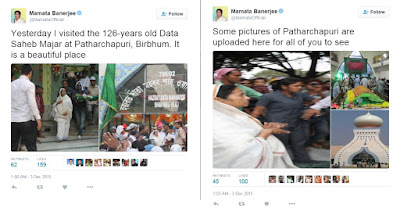 Seeing this development for a blatant denial for the rights of Hindus and an uncanny attempt of removing the name of Bakreshwar from the plaque of the gate under construction by State Tourism Department, the priests, servitude of temples and the common Hindu men in the locality came to the street in protest.

On January 13, the Hindus of the locality blocked the NH 60 for hours until the local administration took the representation of aggrieved Hindus present in the protest. The agitating Hindus assembled in the nearby village Karidhya and marched upto the gate under construction. They started road block and stated slogan shouting against Muslim appeasement policy and undermining the Hindus issues by the TMC and State Govt. The priests and servitude also joined the agitation by stopping the Puja at Bakreshwar and other temples. However all the temples were remained open.

Hearing the road-blockade, BDO, Suri -I, Sri Kaushik Mukhrjee reached the spot and assured the immediate forwarding the representation to the State Govt through proper channel incorporating all the points raised by the local Hindus regarding the issue.

Actually, the conventional road direction also reflects the name of Bakreshwar, Anukul mandir and Patharchapuri. But, the Islamic insanity of Mamata Banerjee put the situation unbearable to local Hindus for removing age old Hindu names from the local Hindu identity.

Getting shocked with the identity crisis a good number of Hindus of TMC party also joined in the agitation and criticized Muslim appeasement of Mamata Banerjee.

Sensing a political mileage, the Dist BJP is preparing a bigger agitation holding the Bakreshwar issue as a political divide in TMC.

"...The gate must be named as Bakreswar-Patharchapuri Toran so that the visitors can find the routes of both places. This gate may be a symbol of communal harmony if the names of both this pilgrimages is mentioned," the newly appointed district President of BJP Ramkrishna Roy said.

The Hindu Jagran Manch and RSS are also going door to door with leaflets describing the serial Hindu discrimination upon Hindus in West Bengal and the list of endless Muslim appeasement in the state by TMC and Mamata Banerjee.
Posted by Bengal Spotlight at 2:40 AM