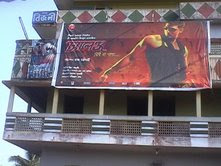 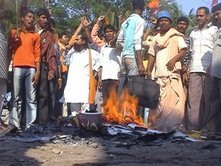 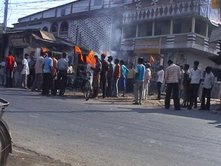 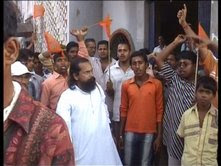 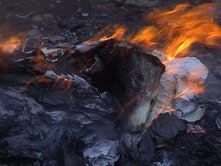 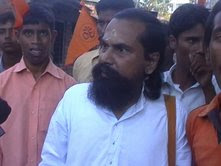 Diamond Harbour, South 24 Pgs, WB, India, April 12, 2009: A strong protest and high agitation interrupted the smooth show of Bengali Film "Challenge nibi na sala" at New Bijoli Cinema Hall at the southern town of Diamond Harbour, 45 km away from Kolkata. The protesters pulled down the banners and posters outside the Hall and set fire with slogans that the Hindus will not tolerate anyway the humiliation of Hindu God and Goddesses and Great men in the name of entertainment. This film runs a song "Bhaja Gouranga, Laha Gouranga , Kaho Gouranga...... Krishna korle lila, amra korle bila" which depicts some obscene and vulgarity in a dance scene in a pub.

Some 2oo protesters lead by Sri Madan Prabhu, Head Monk of Local Gaudiya Math and Upananda Brahmachari, Prominent Activist of Hindu Samhati, blocked the entrance of the Hall and delivered their lectures for re-censor the impugned song and eliminate the song at once to respect the sentiments of Hindus hurt by the unnecessary input of the song in question. Sri Barun Shankar Thakur, a whole timer of RSS was also present all along to encourage the participators in the agitation.

The Protester shouted slogans as, Hindus will not tolerate any humiliation upon dharma, The Producer and Censor Board have to put off the derogatory song about Sri Krishna and Chaitanya Mahaprabhu, Stop all types of humiliation of Hindu Dharma and Hindu great men in Literature, Paintings, Songs, Drama and advertisements. Jai Sree Ram, Sri Krishna Chandra Ki Jai, Chaitanya Maha Prabhu Ki Jai, Bharat Mata Ki Jai slogans rented the air when the agitation was in a high pitch. Sri Madan Prabhu emphatically delivered in his lecture we will adopt the same way as shown by Sri Chaitanya Maha Prabhu in the case of Chand Quazi Dalan, if the Hindus do not get positive result. This is not a protest for one time, now the Hindus are ready to protest several times until the justice and prestige of Dharma is upheld.

Sri Upananda Brhmachari met the press and declared that honoring the interim order of Sri Tapas Mitra, Honb'le Judge of Nabadwip Court, we have performed the whole agitation keeping law and order properly. That does not mean that the Hindus are passive. As the Producer and Director are directed to appear to Court on 17th April, we will wait for that time. We have full faith on Judiciary. But, if the same is reluctant to save the sentiments of Hindus, the Hindus will see the last of it. Brahmachari added that a formal representation will be given to the SDO Diamond Harbour with mass signature. Sri Amaresh Mukherjee, educationist and critic joined the protest rally and resented with the vulgarity in modern films and literature by some so called secular elements in Bengal. Sri Tapan Biswas, renowned Advocate, Diamond Harbour Criminal Court also present in the protest rally.
The Hindu leaders of the protest rally gave a written protest letter to Sri Chandi Jana, the owner of New Bijoli Cinema Hall to ban the song in question. Sri Jana assured that he will take the matter of sentiment of Hindus very quickly to the Producer of the Film.
The organisers of the Protest rally expect from the International Hindu Community to creat a Pressure Group for banning the derogatory song in the Bengali Film " Challenge.. nibi na sala" .What a Sub-Title of the Film !! This is the language they want to introduce with. Really this a challenge to Indian tradition, Bengali culture and Legacy of Tagore , Nazrul, Sukanta and Jeevananda of Bengal.
posted by bengalspotlight media team, south 24 pgs, wb.
Posted by Bengal Spotlight at 6:27 AM