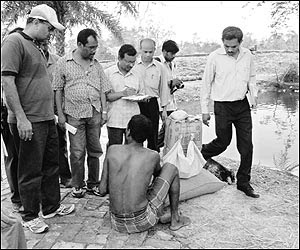 Members of the Central team with a cyclone victim at Lahiripur in Sunderbans.

The visit of the much-awaited Central team to the cyclone-affected areas fell short of expectations as the team could manage to visit only two places, though they were expected to visit ten villages in Sunderbans.
A five-member team led by Ashok Lavasa, Joint Secretary Ministry of Home Affairs, and accompanied by the top brass of South 24-Pargnas administration including the DM and the SP had a fleet of seven launches, when they set out for their visit Sunday morning.
But by evening they visited only Rangabelia and Lahiripur, as the district officials managed to restrict them to these places.
“I do not know the topography of the place and am dependent on the state government. I want to visit the marooned areas but I was taken to these two places only,” said Lavasa.
He added that it was the responsibility of the state government to take them to areas that recorded maximum damage.

At Rangabelia, where the team spent most of the time, 3389 houses have been destroyed by the cyclone and three persons have died.
When the officials asked about the relief camps for the villagers, the district officials said four camps were erected but now have been dismantled.
The team noted that water scarcity was a major problem in the area. “Water supply is a problem and the state government needs to resolve the issue as quickly as possible,” said Lavasa. The team also learnt that about 4,700 domestic animals have died in the calamity and there was no provision of burying them. The villagers said they have not been supplied with any bleaching powder and not enough doctors are present in the hospital.

The team spent only a few minutes in Lahiripur and spoke to just one woman before leaving. The team was scheduled to visit Gathkhali, Gosaba, Sonargaon, Bali II, Pakhiralya, Satkhelia, Kalidaspur, Chottomullachak and Kumirmari — one of the farthest region of the Sunderbans.
As their boats went across various islands, people came out of their shelters and spelt out their grievances, but the district administration did not let the team interact with villagers.
In one instance, a district official also shouted at the journalists, who insisted that the team should visit all places. “It is none of your business. It is our responsibility to take them around,” said an official.
The team accepted that the magnitude of destruction has been huge but about declaring it a national disaster, the Central officials said they will visit Patharpratima on Monday before taking a final call on the issue.

State Health & Public Health Engineering Department are to do
something without a Comprehensive Planning.

Tidal waves continued to lash Aila-hit islands in the Sunderbans through Saturday night and Sunday.

Villagers claimed the water level had increased since Saturday and could go up to five metres in low-lying areas by Monday.

“The high tide tolled in at night. In the morning, we woke up to see water gushing in… It was a ghastly sight,” said Jayanta Naskar, pradhan (headman) of Chunakhali village.

The village lies in Gosaba block - one of the worst affected. It comprises 14 villages, 12 of which are already inundated. Communication is cut off.

Since these islands are surrounded by the tributaries of big rivers like the Raimangal and Bidya, the water level is expected to go higher and the damage likely to be more.

Residents of these villages have been toiling day and night to plug the many breaches left by Aila with sand bags. But there are still gaping holes as wide as 2,500 feet.

A large number of people have fled towards higher grounds. Some have taken shelter on the embankments with the river dangerously close.

Environment experts and wildlife conservationists say the huge displacement caused by the cyclone and tidal waves may force many of the estimated 400,000 people who live among the mangrove forests and creeks and rivers to enter protected forests, thereby threatening one of the richest but most fragile ecosystems on earth.

In nearby Satjelia, Chiotomollakhali and Gothkhali, there’s another killer on the prowl — disease. An outbreak of enteric diseases has reportedly claimed five lives already, four in Satlejia alone, locals said. Officials did not confirm this though.

The central team, which is supposed to visit 11 places to assess damage and oversee relief work, has only reached Lahiripur so far.

Not possible to repair all embankments hit by Aila: Bengal minister


A day before the full moon high tide coming close on the heels of the devastation caused by Cyclone Aila, the West Bengal government has admitted that it would be unable to repair a large part of the 400 km of damaged embankments in the mangrove-forested delta of the Sundarbans.
The full moon high tide scheduled on Sunday, considerably stronger than a normal high tide, has given rise to fears of fresh inundation and consequent massive devastation in an area where around 400,000 people live. The embankments have either been breached or weakened by Cyclone Aila which hit 13 of the 19 districts of the state May 25.
"There is a total of 3,500 km of embankment in the Sundarbans. Out of that 400 km has been breached. But it is not possible for us to repair more than 50-60 percent of it," state Sundarbans Affairs Minister Kanti Ganguly told IANS on Saturday.
The minister appealed to the able bodied people of the coastal regions of the North 24 Parganas and South 24 Parganas districts, which harbour the Indian part of the Sundarbans, to help strengthen the embankements.
"They must rush to the embankments with gunny bags, soil and shovels. If there is any fresh breach, that must be taken care of immediately," said Ganguly, who has been shuttling between remote Gosaba and Basanti to supervise relief operations in the worst-hit South 24 Parganas district.
Asked whether the government, which drew flak for inadequate relief distribution after the Aila damage, had succeeded in making foolproof arrangements, Ganguly said: "The geographical location of the Sundarbans is such there would always be gaps."
He said measures have been taken to make arrangements for sufficient water pouches in all the islands. "People have been asked to take shelter in safe school buildings," he said.
The entire Sundarbans region - areas like Gosaba, Patharpramita, Kultali, Hingalganj, Basanti, Sagar, Mousuni and others - has been ravaged by the cyclone, which left 128 people dead in its wake.
Ganguly said to reach medical facilities to the victims, village quacks are being trained at the initiative of some private organisations. "We have also started saline water de-watering of 50,000 ponds."
Irrigation minister Subhas Naskar said a large number of bamboo checkposts are being constructed in several key points.
"Three state ministers, myself (civil defence minister) Srikumar Mukherjee and Ganguly will take charge at different points. They will take spot decisions if the tide causes damages."
Meanwhile the state government was evacuating people in low-lying areas to safe zones.

Mukherjee said civil defence personnel have reached their areas of deployment by Friday.

Posted by Bengal Spotlight at 10:55 PM