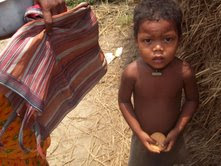 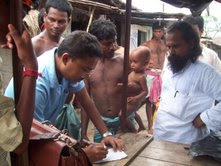 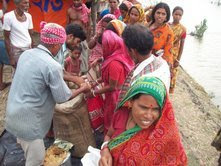 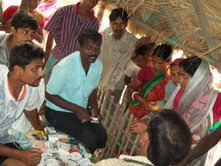 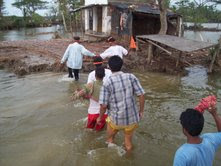 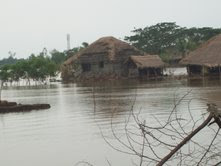 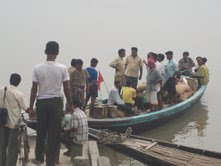 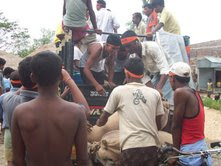 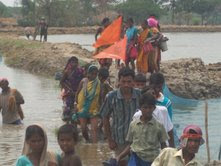 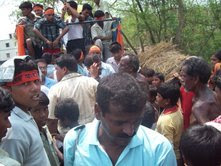 At Bermajur some 300 affected tribal people gheraoed Samhati Truck fully loaded with relief materials including dry foods, milk, medicines and ORS. The Aila affected tribal people were demanding some food and medical assistance as the Govt and other assistances are scanty and highly irregular. But When it was told that this relief team will go to Bermajur Dambalpara and Majherpara, the agitated people sympathetically allow HS team to venture there as no relief team covered those places yet.

As soon as a group of agile and dedicated workers left Bermajur Natun Bazar towards Dambalpara, Dr. Druba Mahajan and Upananda Brahmachari started a medical assistance camp in the near by fish market (though closed since the Aila Devastation on 25th May,09), where more than 100 patients were served with medicines, ORS, and Halazone tablets.

Though Majherpara-Dambalpara was a toughest place to reach, the relief team lead by Sujit Maity and Prokash Das reached there taking the relief materials by head-load and ‘shalti’- a small type of small boat, after exploring the waist level flood water stagnant there.

Another team distributed relief material at Gholapara and Jhupkhali Boyra Para. Dr. Subhankar Biswas always volunteered to reach the most difficult areas to extend every possible medical assistance to the affected people on this day.

Form Bermajur area the HS team reached at Dhamakhali in order to cross the river Bidyadhari to station at Khulna island, another land of devastation in Aila storm.

As His Excellency Sri Gopal Krishna Ghandhi reached Sandeshkhali this day, the police contingent over acted upon the relief team to reach them to Dhamakhali Jetty Ghat for crossing the river to reach other side for relief work. However, the HS Relief Team crossed the river hiring a boat from an unusual point at the muddy embankment taking a high risk. 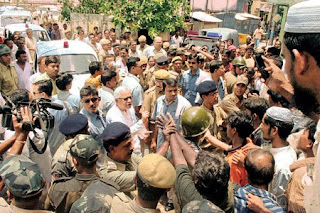 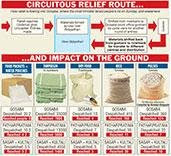 Posted by Bengal Spotlight at 12:26 PM