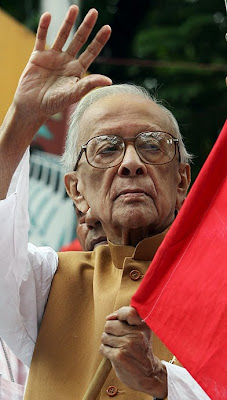 As per available report Com. Jyoti Basu expired today at 11.47 am in Kolkata. A legend as per Communist belief, is unfortunately deprived to see a Muslim West Bengal for which he dedicated his life over 60 years in his political career. He was the champion of Muslim politics and a successful colleague of Muzaffar Ahamed, who paved the way for Pakistan or the Divide of Bharatvarsha and caused the onslaught of in-numerous Hindus in this sub-continent and the permanent humiliation and torture of uprooted Hindus of East Pakistan (now Bangladesh) and the Hindus in West Bengal in his inequitable regime over 30 years.

As per Hindu belief, we must pray to God to take his soul to permanent abode of peace or into the inferno according to his deeds and misdeeds. But obviously he made this land of Bengal as an inferno for the persecuted Hindus in both the sides of Ganga and Padma.

Com. Jyoti Basu was a refugee from East Pakistan, now Bangladesh and tried his level best to make all the Hindus as refugee and the jimmi (captive) of Muslims in many ways. He was a true friend of Islamofascists of this subcontinent and nobody can disbelieve this truth anyway. Perhaps he had a blueprint ( read green-print ) to fix the fate of Bengali Hindus alike the fate of Hindus of Kashmir. Within 2011 the Bengali Hindus have to taste this reality eventually. As Kashmir is still a part of India and Hindus there are under an inexpressible torture, humiliation and persecution by the religious Muslims of Kashmir, in the same way, the days are ahead in West Bengal to see the same situation here as a great contribution of this Greatest Comrade of Bengal forever. His most rival and affectionately Miss Mamata Banerjee (another refugee from East Bengal) is profoundly maintaining the legacy of Jyoti Basu in this respect.

Com. Basu was son of Dr. Nishikanta Basu, who was a saint like personality and a devotee of Baba Lokenath Brahamachari and a devout Hindu. But Jyoti Basu never tried to understand Hinduism or feel the problems of Hindus as a Hindu.

My knowledge is limited about his greatness and consequently to render an obituary for this departed soul. I may take the help of my friend Kanchan Gupta in Daily Pioneer in this respect. Long Live Jyoti Basu. Alas ! He is no more !!!

Had it been Jyoti Banerjee lying unattended in a filthy general ward of SSKM Hospital in Kolkata and not Jyoti Basu in the state-of-the-art ICCU of AMRI Hospital, among the swankiest and most expensive super-speciality healthcare facilities in West Bengal, Prime Minister Manmohan Singh would not have bothered to arrange for a video-conference for top doctors at AIIMS to compare notes with those attending on the former Chief Minister of West Bengal.

Jyoti Banerjee, like most of us, spent his working life paying taxes to the Government. Jyoti Basu spent the better part of his life living off tax-payers’ money — the conscience of the veteran Marxist was never pricked by the fact that he appropriated for himself a lifestyle shunned by his comrades and denied to the people of a State whose fate he presided over for a quarter century. Kalachand Roy laid what we know today as Odisha to waste in the 16th century; Jyoti Basu was the 20th century’s Kala Pahad who led West Bengal from despair to darkness, literally and metaphorically.

Uncharitable as it may sound, but there really is no reason to nurse fond memories of Jyoti Basu. In fact, there are no fond memories to recall of those days when hopelessness permeated the present and the future appeared bleak. Entire generations of educated middle-class Bengalis were forced to seek refuge in other States or migrate to America as Jyoti Basu worked overtime to first destroy West Bengal’s economy, chase out Bengali talent and then hand over a disinherited State to Burrabazar traders and wholesale merchants who overnight became ‘industrialists’ with a passion for asset-stripping and investing their ‘profits’ elsewhere. A State that was earlier referred to as ‘Sheffield of the East’ was rendered by Jyoti Basu into a vast stretch of wasteland; the Oxford English Dictionary would have been poorer by a word had he not made ‘gherao’ into an officially-sanctioned instrument of coercion; ‘load-shedding’ would have never entered into our popular lexicon had he not made it a part of daily life in West Bengal though he ensured Hindustan Park, where he stayed, was spared power cuts. It would have been churlish to grudge him the good life had he not exerted to deny it to others, except of course his son Chandan Basu who was last in the news for cheating on taxes that should have been paid on his imported fancy car.

Let it be said, and said bluntly, that Jyoti Basu’s record in office, first as Deputy Chief Minister in two successive United Front Governments beginning 1967 (for all practical purposes he was the de facto Chief Minister with a hapless Ajoy Mukherjee reduced to indulging in Gandhigiri to make his presence felt) and later as Chief Minister for nearly 25 years at the head of the Left Front Government which has been in power for 32 years now, the “longest elected Communist Government” as party commissars untiringly point out to the naïve and the novitiate, is a terrible tale of calculated destruction of West Bengal in the name of ideology. It’s easy to criticise the CPI(M) for politicising the police force and converting it into a goons brigade, but it was Jyoti Basu who initiated the process. It was he who instructed them, as Deputy Chief Minister during the disastrous UF regime, to play the role of foot soldiers of the CPI(M), first by not acting against party cadre on the rampage, and then by playing an unabashedly partisan role in industrial and agrarian disputes.

The fulsome praise that is heaped on Jyoti Basu today — he is variously described by party loyalists and those enamoured of bhadralokMarxists as a ‘humane administrator’ and ‘farsighted leader’ — is entirely misleading if not undeserving. Within the first seven months of the United Front coming to power, 43,947 workers were laid off and thousands more rendered jobless as factories were shut down following gheraos and strikes instigated and endorsed by him. The flight of capital in those initial days of emergent Marxist power amounted to Rs 2,500 million. In 1967, there were 438 ‘industrial disputes’ involving 165,000 workers and resulting in the loss of five million man hours. By 1969, there were 710 ‘industrial disputes’ involving 645,000 workers and a loss of 8.5 million man hours. That was a taste of things to come in the following decades. By the time Jyoti Basu demitted office, West Bengal had nothing to boast of except closed mills and shuttered factories; every institution and agency of the State had been subverted under his tutelage; and, the civil administration had been converted into an extension counter of the CPI(M) with babus happy to be used as doormats.

After every outrage, every criminal misdeed committed by Marxist goons or the police while he was Chief Minister, Jyoti Basu would crudely respond with a brusque “Emon to hoyei thaakey” (or, as Donald Rumsfeld would famously say, “Stuff happens!”). He did not brook any criticism of the Marich Jhapi massacre by his police in 1979 when refugees from erstwhile East Pakistan were shot dead in cold blood. Till date, nobody knows for sure how many died in that slaughter for Jyoti Basu never allowed an independent inquiry. Neither did the man whose heart bled so profusely for the lost souls of Nandigram hesitate to justify the butchery of April 30, 1982 when 16 monks and a nun of the Ananda Marg order were set ablaze in south Kolkata by a mob of Marxist thugs. The man who led that murderous lot was known for his proximity to Jyoti Basu, a fact that the CPI(M) would now hasten to deny. Nor did Jyoti Basu wince when the police shot dead 13 Congress activists a short distance from Writers’ Building on July 21, 1993; he later justified the police action, saying it was necessary to enforce the writ of the state. Yet, he wouldn’t allow the police to act every time Muslims ran riot, most infamously after Mohammedan Sporting Club lost a football match.

Did Jyoti Basu, who never smiled in public lest he was accused of displaying human emotions, ever spare a thought for those who suffered terribly during his rule? Was he sensitive to the plight of those who were robbed of their lives, limbs and dignity by the lumpen proletariat which kept him in power? Did his heart cry out when women health workers were gang-raped and then two of them murdered by his party cadre on May 17, 1990 at Bantala on the eastern margins of Kolkata? Or when office-bearers of the Kolkata Police Association, set up under his patronage, raped Nehar Banu, a poor pavement dweller, at Phulbagan police station in 1992? “Emon to hoyei thaakey,” the revered Marxist would say, and then go on to slyly insinuate that the victims deserved what they got.

As a Bengali, I grieve for the wasted decades but for which West Bengal, with its huge pool of talent, could have led India from the front. I feel nothing for Jyoti Basu.

posted by Tanusree Pathak
Posted by Bengal Spotlight at 1:14 AM