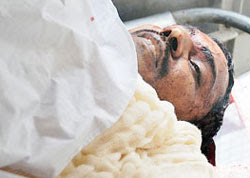 As he was a profound supporter of RSS ideology, he tried his best to put her daughter in Saraswati Sishu Mandir successfully. He learnt dedication for work and the punctuality from the RSS Sakha (one hour daily performance) in his teens. And he sacrificed his life for the dignity of his assigned duties. But it is a great note of exclamation to every locals that no men from RSS or the authorities of Sishu Mandir reached Sanat's home to give a solace to the bereaved family of Ghoses.
"Sanat Ghosh’s wife recounted the last conversation she had with him last night and lamented why she hadn’t implored him enough to conduct the raid in the morning with more men.

The assistant sub-inspector of police had called up his wife Mita around 11pm yesterday. He said he was going to raid a house in a Ratua village. Mita who stays at the police lines here with the couple’s daughter had asked him not to enter the village at the dead of night with so few men.

“It cannot be helped, the number of policemen at the thana is, too, inadequate,” Ghosh told her before leaving the Ratua police station.

“If only I had pleaded enough. I cannot forgive myself,” said Mita surrounded by neighbours.

“I am going on a raid. You have dinner and go to bed I will call you in the morning,” Mita quoted Ghosh as saying. “When I asked him who else were accompanying him, he told me. I asked him why he had home guards and the NVF (and not constables) with him, he told me he had no other alternative as there was inadequate force at the police station,” Mita said.

She said her husband was totally devoted to his duty and paid scant attention to household affairs. “His work was his priority, when I tried to pull him up, he used to say that at his age what else could he do? Now I am left with our 10-year-old daughter all by myself. We were supposed to join him in Ratua next month. All those plans are now shattered.”

The couple’s daughter is a Class V student of Saraswati Sishu Mandir.

Ghosh’s younger brother, Swadhin Ghosh, arrived this morning from their ancestral home in Kardaha in Tapan, South Dinajpur. Swadhin, a high school teacher in Tapan, stays there with their ageing parents and his wife.

“Our parents had struggled financially all along. When my brother joined the police in 1997, he used to supplement the family income,” Swadhin said.

Additional police superintendent of Malda Kalyan Mukherjee remembered Ghosh as the most courageous and responsible among the ASIs in the district police force. “He could be very acceptable to the public,” Mukherjee said.

When confronted with the information that the NVF personnel had rifles that allegedly did not work, Malda police chief Bhuban Mondol said: “The police fired one round. Ghosh did not get the chance to touch his revolver, so the bullet must have been fired by the other policemen. So how can you say that the rifles did not work? We are investigating into what exactly took place.” Senior officers said the role of those accompanying Ghosh was being probed.

The police chief said three years ago, the family of a youth had filed an abduction complaint against 48-year-old Ansarul, his wife Mamtaz Bagum and four sons Sheikh Ibrail, Shiekh Rasel, Shiekh Kayes and Shiekh Ayesh, and three others. They had complained that the youth from a village in Manikchak had been lured away with the promise of a job in Delhi by Ansarul and his family and had gone missing since then.

“The police had been trying to track down Ansarul for sometime. Ghosh had got the news that Ansarul had turned up in Chandpur and had gone to arrest him,” Mondol said.

Early this morning, enraged villagers ransacked Ansarul’s house and set it on fire. A former Congress panchayat pradhan of the area, Abdul Mannan, said: “The police came looking for Ansarul regularly and the family had earlier been chased out of villages in Manikchak and Ratua.”

The police handed over Ghosh’s body to his family after a post-mortem and a guard of honour."

From a very reliable source it is known that Sk. Ansarul has been operating a racket of trafficking along with some suspected activitivism in favour of Islamic Fundamental Organisations in the border district areas with his full home team of Mamtaz Begum (wife), and four sons Sheikh Ibrail, Shiekh Rasel, Shiekh Kayes and Shiekh Ayesh. As Ansarul was a Ex-Army man, he always tried to grab the situation with the help of his pervious designation. It has also been surfaced that Ansarul supplied a huge number bullets to the Muslim goons of the area from an unknown source. Ansarul had a suspected connection with Jagroto Muslim Bangla Dal (JMB Party) which is connected with a plan to divide West Bengal on communal basis.

As per the statement of Ibrahim Khan, a sitting Congress Panchayet member of the village and the Ex-Prodhan of the concerned Panchayet, Abdul Mannan - "Ansarul is a very dangerous type of man. Nobody dare to mix with him or his family members"

The affairs in details definately struck the concerned to the matter of posting of Muslims in Army and Police, as no army or police training can help to change these Muslim Fundamentalists from the clutch of obstinate religiosity and devout anti-socialism.

posted by Sambuddha Gupta.
Posted by Bengal Spotlight at 11:31 AM