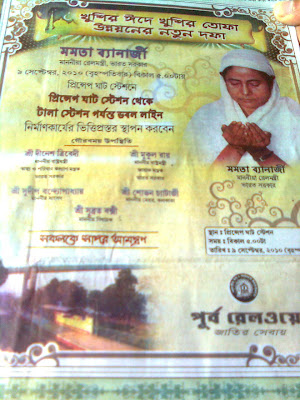 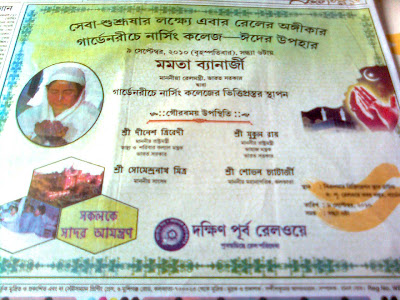 KOLKATA: Desperate for power in Bengal, Trinamool Congress chief Mamata Banerjee is missing no opportunity to grab Muslim votes. A recent railway advertisement with her picture offering namaz in the backdrop of Islamic motifs a crescent moon and star and outlines of a mosque has created an uproar.

That Mamata calls imams and maulvis for discussions is well known. People are also familiar with her offering namaz, especially during the anti-land acquisition stir in Singur in 2008. What's raising eyebrows is the use of a railway advertisement for catching Muslim votes.

"I don't understand the connection between religious motifs and a nursing college in Garden Reach. This is exploitation of religious sentiments. We are a multi-religious society. How can public money be abused like this?" asked CPM central committee member and ex- MP Mohammed Salim.

BJP leader Tathagata Roy said, "The state has no religion. How can religious edifice be part of a government advertisement? This reveals her duplicity. She hasn't converted so how can she offer namaz? It's extremely improper." 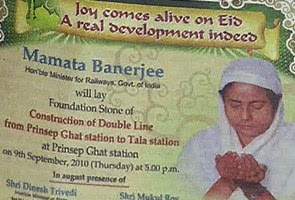 Thespian Bratya Basu, who is close to the Trinamool chief, said, "We claim we belong to a secular country. But do we really believe in secularism?

On the contrary, there is communal feeling among elite Hindus and Muslims. Mamata is bridging this gap. It's the right message to a community that feels let down."

Railways sources said several photographs were sent for the minister's approval. "The minister's cell approved the one in which she is seen offering namaz," a source said, adding that officials were asked to include the motifs and the photograph of Kaaba in the ad by those close to the minister. "The minister has equal respect for all religions. In mid-April, we brought out three ads to greet people on Poila Baisakh, Baisakhi and Puthandu (Tamil New Year's Day)," said Soumitra Majumdar, CPRO, South Eastern Railway.

Community leader Siddiqullah Chowdhury, the state secretary of the Jamiat-e-Ulama-e-Hind who took to the streets calling for banishing Taslima Nasrin from Bengal, said, "I haven't seen the advertisement. But I feel that politics should be delinked from religion.''

Posted by Bengal Spotlight at 10:01 PM