One step forward for a Pakistan in Paschimbanga (West Bengal) 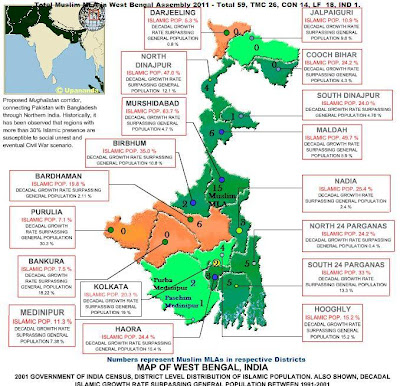 For a Change, can we change our fate same for the status of Hindu minorities in Bangladesh or Pakistan ?

Yes, the "Change" in the result of West Bengal Assembly Election 2011 is now ready to put the Bengali Non Muslim population under the aggression of the Muslim Fundamental power, fully backed by the Political ambitions both to capture the power or to retain the power to reign West Bengal with a tool of appeasement and anarchy.

The graph is highest than ever. The 45 Muslim MLAs in 2006 have been emerged as a more powerful 60 Muslim MLAs in West Bengal Assembly in 2011 and the lovers of red shirts preferred green designers for their best choice. Imagine a great shouting of "Allah ho Akbar" in the floor of Assembly by all the Muslim MLAs and the frightened Non Muslim MLAs are running away from the arena.

The Islamic Manifesto of TMC (Total Muslim Congress) has given the dividend more than Six time high (4 to 26) to TMC itself and two times high to its allies Congress (7 to 14) and cut half the opponent Left Front, snatching away the Muslim supports from the 'Red Circle' to the 'Green Bastion' of TMC (18 from 34). Now, this is the time to implement the higher Muslim reservation for employment, bank loan, business and local governance. Opening of four campus of Aligarh Universities in West Bengal. Recognizing Urdu as second language where the Urdu people are just 10%. Rs.20000/- salaries to all Muslim Imams engaged in conducting namaz in the Mosques ans Rs 15000/- for the Muajjins who give Azan (Prayer Call) before Namaz. More and more Madarshas will get recognitions, more slaughter houses will be opened with a good chain of beef selling points in every corners. It will not be a wonder if we see that Cow slaughter is permitted in Bhidhan Sabha Bhavan at Bakar Idd or some Islamic hotels are opened in Writer's Buildings. Our apprehensions are not eccentric if the loud election promises in the meetings and manifestos are given importance.

In the first lot TMC supremo Mamta Banerjee (Mamtaz Banoo Arjee) included 6 (Six) Cabinet Minister viz. Abdul Karim Chowdhury, Javed Ahamed Khan, Haider Ajiz Safi, Firhad Hakim, Nure Alam Chowdhury (all TMC) and Abu Hena (Congress) in her Ministry and keept other 4 (four) Muslim MLAs reserved for the ministerial posts to boost up the Islamic propaganda in the Party and Administrative lines. Mamata has a plan to adore as much 15 (fifteen) Muslim Ministers in her Green Crescent Ministry for a prospective "Muslim Bangla". Everybody knows the planning of Nurar Rahaman Barkati, Idrish Ali, Taha Siddique and Siddikullah Chowdhry. Muslims in Bengal (West Bengal) are more united than ever and the Hindus are being fragmented socially and politically day by day. Even the so-called secular forces in Sushil Samaj (Bengali Intellectual Society) are bowing down to the Islamist Forces in Bengal, sometimes licking the feet of Muslim Fundamentalism for their social prospects. Never they uttered a single word against the the driving out Taslima Nasrin and the Kolkata Riot for that, Rampaging in Statesman House and protest over an article by Johann Harri, Supporting Cow Slaughter against the High Court verdict, violating 65 decibel parameter of the use of microphone from Mosques, dismissing Pulse Polio programmes in many places, contradicting family planning, condolence prayer for Osama Bin Laden in Kolkata heart land and so on...... Okay, a new morning in a Muslim Bangla is ushered through this Change Syndrome. What Bengal thinks today ......... 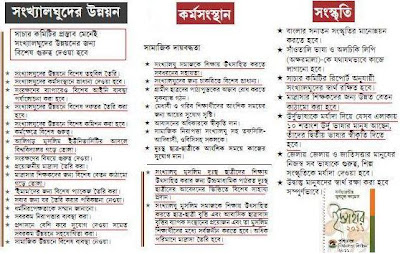 This Islamization of west Bengal are bound to happen within 200 days to 2 years more as the experts for Islamisation are too active in all parties, Left to Right.

In this Context the Non Muslims in West Bengal can think further if they don't want to surrender to the threat of Islamic Fundamentalism and the dangerous political parties promoting the appeasement and aggression of Islam.

We can verify the points as under when we have no option otherwise to raise our voice against the stealthy Islamisation of West Bengal.

These are some issues that may be focused for future political activities in West Bengal. I shall divide the discussion in two sections – Issues for 2016 and issues for 2050.
Let me first take up the issue for the year 2050. Though there is 40 years left and no one can predict the social and political changes that may or may not take place during the passing years yet the problem is so important that it can’t be left to grow silently to annihilate the whole Bengali society in not so distant future. The issue of 2050 is whether West Bengal will exist or not.
Let me first highlight some specific characteristics of West Bengal which are important for choosing the issues.

Now what should we do if we know that the state which was specifically created for non-Muslims, with 81% non-Muslim population in 1951 is going to become a Muslim majority state in 2052 just by demographic change? Should we accept it as fate accompli?

My suggestions are
Remember that this campaign will help us in all our simultaneous programmes as it will keep the central issue of existence of West Bengal alive.


Second issue of the year 2016 is basically thinking about next state election unless there is a mid-term election.
In this election of 2011, the non-CPM, Non-TMC (mainly BJP) had no issue at all. Due to media explosion, at least 5 Bengali news channels carried on discussion on state election for one and half month. However BJP had no issue to tell the viewers (except Central corruption which is not an issue in West Bengal at all), so they exercised their oratory skills on the issues highlighted by TMC or CPM.
SO WE NEED TO IDENTIFY OUR OWN ISSUES THOSE ARE IMPORTANT TO WEST BENGAL. In 2011 those easily could be demographic change, Bangladeshi infiltration, Madrasa education, Muslim reservation, Taslima Nasrin besides the other common economic issues. The religious issues are linked to demography as explained below.
So now let me talk of about some issues for which we can start our campaign from now, preparing our own agenda long before 2016.

ISSUES
WE HAVE TO HIGHLIGHT THE ISSUE OF LAND (SINGUR-NANDIGRAM) LINKING IT WITH DEMOGRAPHY AND ISLAMIC PERSECUTION.
WE HAVE TO HIGHLIGHT THAT IF WEST BENGAL WANTS DEVELOPMENT and employment, THIS ISSUE OF POPULATION HAS TO BE SOLVED
METHODS
How do we carry out the campaign?
Further Reading :
Posted by Bengal Spotlight at 1:27 PM

About 48 per cent of newly- elected MLAs of Kerala and 35 per cent of West Bengal have criminal cases pending against them, according to a study.

The analysis by Association for Democratic Reforms (ADR) and National Election Watch has found out that 257 MLAs out of 820 (31 per cent) whose poll affidavits were analysed in the new assemblies of Assam, Kerala, Puducherry, Tamil Nadu and West Bengal have criminal cases against them.

A total of 133 MLAs out of the 257 have declared serious IPC charges like murder, attempt to murder, robbery and extortion in their affidavits. An Assam legislator even has charges of waging war against the government against him.

Percentage-wise, Kerala has 48 per cent MLAs with criminal cases, followed by West Bengal (35 per cent), Puducherry (30 per cent), Tamil Nadu (29 per cent) and Assam (10 per cent).

The analysis looked into poll affidavits of 820 of the 824 newly-elected MLAs. Affidavits of three MLAs of Tamil Nadu and one of West Bengal could not be analysed as these were not on the election commission websites, the NGOs said.

Mr.Brahmachari, I understood your well documented points but the problem is that the electorate in West Bengal are trapped between the "devil and deep sea". If the Hindus did not vote en mass, then it would have been difficult to banish the Left out of the corridors of the West Bengal. Left were more guilty of destroying Hinduism and paving the way for Islamisation of West Bengal--so that had to be removed by hook or crook.
I think once the decimation of the Left completes like it happened in Assam, the right wing parties like BJP can function with much ease. Let us hope that the Hindu Bengalis in West Bengal gets united.

its right time to take action against it. else we will lose a great state from India .

people of bengal shud unite and cast their vote in favor of BJP.