West Bengal Assembly Election 2011. Dada or Didi : Who will be the next Chief minister of West Bengal? 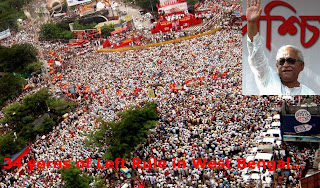 There will be some sighs as the Trinamool and Congress parties finally seal their seat-sharing deal for the upcoming Bengal elections, the allies sighing in relief, the incumbent CPM in resignation at the challenge posed. With the Congress settling for 65 of 294 seats, some aspects of realpolitik come to light. Aware of the crest Mamata Banerjee is riding, the Congress has made a wise decision to not squabble over numbers but give in to its more powerful regional partner. On its side, the Trinamool recognises the advantages of the alliance, keeping the anti-Left vote together and retaining its link with the national-level party. Why the last is a plus is connected to the Left's history in Bengal.

The CPM came to power in 1977, riding a tide of hope and achieving accomplishments like Operation Barga, land transferred to sharecroppers, while maintaining communal harmony in a state that experienced horrific rioting at Partition. However, it also choked much of Bengal's civil society, party politics dominating everything - whether college entrances, job allocations, law and order, the last a terror tactic used by party musclemen snatching rights and resources. Bengal once held myriad businesses and manufacturing. Over the years, faced with regimented bullying, these dried up. Meanwhile, the state's performance in poverty reduction and education dipped, its fiscal debt rose, its professionals migrated and the desperation around land intensified. Recently attempting to rejuvenate industry, the Left blotted its copybook severely. Its 'official' goondas terrorised locals at sites like Nandigram, handing Mamata a moral advantage.

Currently, while her own precise vision for Bengal's development is yet to fully emerge, Mamata's electoral strategy has been astute. The Trinamool first broke open the CPM's rural bastion, performing well in panchayat, zila and civic elections. It won over intellectuals, roped in software guru Sabeer Bhatia to help its cyber campaign and announced FICCI secretary-general Amit Mitra's candidature, sending encouraging signals to industry.

In all this, its link with the Congress remains significant for it sends a message that Bengal's days of isolation may be over. A government working with the Centre, not constantly opposing it, could serve popular aspirations well. The implementation of poverty reduction strategies, such as NREGA, could improve in an environment divested of patronage politics and ideological wars. And being linked to a party often in central government, answerable to Parliament, could help reduce political violence

in the state. It is through moves like these that Mamata can show the Trinamool Congress isn't just about realpolitik but also real change, providing the break Bengal longs for. 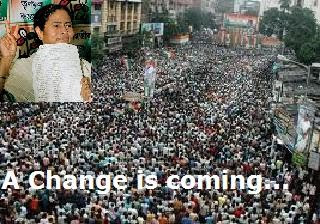 Dada or Didi : Who will the next Chief minister of West Bengal?

West Bengal Assembly Election 2011. Prediction. Who will the next Chief minister of West Bengal? Dada -’Buddhadeb Bhattacharya’ or Didi -’Mamata Banerjee’? As the election date in West Bengal is coming closer; the question ‘Who will be the Next CM?’ is getting much louder. ‘Didi’ Mamata Banerjee has won all the election took place after 2007 and she and her party men are very much confident this time that they will win the upcoming assembly election. CPI(M) led ‘Left Front’ government has been ruled the Bengal for past 34 years but they lose their charisma after they changed their industrial policy in 2006. 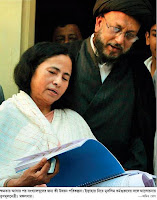 The ‘Nandigram Incident‘ ,‘Singur Incident’ worked as catalyst to this and opposition party like Trinamool congress grab this opportunities and improved their organization in rural areas. They raise their voices for the poop villagers and farmers and they manage to get their mass support.

This effect on all the general elections and self government election happen in the state after 2007. In Panchayat election Trinamool congress defeat Left Front in all major districts and gain the power in those districts. This continues in 2009 Lok Sabha election too. Left front lost their many confirmed seats and they get only 15 seats out of 42 constituencies. United Progressive Alliance (Trinamool Congress,Congress, SUCI) won in total 26 constituencies. Courtesy : Bengal Newz.

They also defeated left front in 2010 Municipal election. It is expected that Buddhadeb Bhattacharya and his Left front lose the battle of Bengal in 2011 and we can see Mamata Banerjee as the new Chief Minister of Bengal. But in present scenario any thing can happen in Bengal. The people of Bengal will decide the faith of these politicians.

The race for Muslim vote is on among political parties fighting the West Bengal Assembly elections 2011. After CPI-M led Left Front released the list of its Muslim candidates, its main rival Trinamool Congress (TMC) of Mamata Banerjee, popularly predicted as next CM of the state, has also announced to field about 40 Muslim candidates.

Out of 228 candidates of TMC 39 are Muslims that include 6 women. Mamata has always shouted in favour of more Muslim representation in legislature, rather in proportion to their population. According to the Census 2001, 25.25% of the West Bengal population is Muslim. She fielded 39 Muslims that is 13.26% of the total 228 candidates of the party. On that front, the Left Front has done more – out of its 294 candidates, 56 are Muslims that is 19% about 6% more than TMC. However, it can be hoped that some more of the seats (66) the TMC has left for allies can be given to Muslim candidates by the allies.

Many of the TMC Muslim candidates the win will not be easy as they have been fielded against sitting Muslim ministers.

Ex Minister and one of the founders of Communist party in West Bengal late Mansoor Habibullah’s son-in-law retired Judge Justice Noor-e Alam Chowdhury is a TMC candidate at Murarai constituency.

Who will be the Next CM of West Bengal?

Vote in the blogger's poll in the left top of this blog ....

Posted by Bengal Spotlight at 12:38 PM