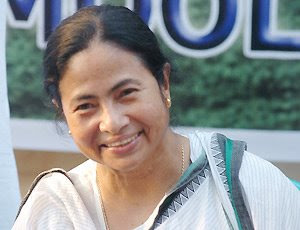 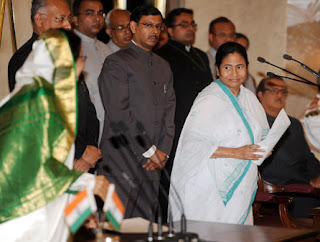 Green Revolution :: West Bengal has the Highest number of Muslim MPs in India.
-by Sambuddha Gupta
I took just seven days to observe the situation in Bengal after the last post in this spotlight on 14th May, 09. The situation is worst ever for the rural Bengali Hindus. From everywhere the news coming about the post poll clash in the name of TMC-CPIM or RSP-CPIM or CONG-CPIM is nothing but the vandalization upon the Hindus by the Muslim goons using every colour to paint a big Green Star n Crescent in Bengal canvas.

This is the real Green Revolution in West Bengal in the advent of 15th Parliament constituting in New Delhi. So the journey of the Green Force from Kolkata to New Delhi depicts only the Supra Control of Muslim Community in Bengal over the frightened Hindu community in every corner of Bengal inside. 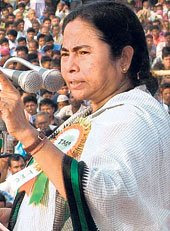 I must clear the picture in some ways.

1. Ganashakti (Daily Organ of CPIM West Bengal) published a report on 18th May, 09 that in Sholebagha in Howrah District within Chitnan Gram Panchayet (Village Level Constituency) 43 households were set fire to ashes out of a post election violence. The victims of Sholebhagha are exclusively belong to the Doloi Community Hindus and the attack upon the houses of Prafullo Daloi, Maya Daloi, Pareshbala Daloi (a 75 yrs old woman) and others was instigated and operated by none other than Sultan Ahamed, an newly elected MP from Bengal and TMC leader.

The muslim goons came from Kolkata with deadly weapons and arms & ammunition. All the belongings of the villagers from their golden ornaments arranged for the up-grown daughter's marriage to the full granary from the harvest or the utensils and water-pot for a marginal inhabitant below the poverty line, all are looted or destroyed by the muslim goons so far reported by the press as a general incident of political violence, not an attack upon Hindus by Muslims.

Many Hindus in North 24 Pgs, especially in Barasat and Bashirhat Sub-Division were attacked by the muslim goons and even murdered in the last three months in connenction of pre-poll violence, and some Hindu Temples including a Harichand Mandir in Bangaon area a Shitala Devi Mandir in Sodepur-Natagarh area were vandalized by anti-hindu gangs of venomous Islamist spirit. But Miss. Mamata Banerjee, the new icon for neo-islamic movement of Bengal ordered Smt. (Dr.) Kakoli Ghosh Dastidar to dedicate her victory in Barasat Parliament Constituency in the name of some Khijjir Molla who was murdered in a post poll clash out of a inner conflict between local power groups of muslims. Khijjir was a supporter of TMC as told. But Mamata Banerjee or the Kakoli G Dastidar are in a process to ignore and forget the dedication and sacrifice of hundreds and thousands Hindu supporters of Congress(Indian National Congress) & TMC(Trinmool Congress) in the last 32 years of struggle in the Bengal to an end of a Marxist regime.

3. On 16th of May at about 12-30 broad day light Sri Prahlad Pramanik was murdered by Ahammed Molla and his group in Sonakhali area under Canning Police Stn within Joynagar Parliamentary Constituency. Prahlad and Ahammed both are the supporters of local RSP and registered in the action group of the party. But Prahalad was fatally targeted with iron-rod to die for his pro-Hindu activities by the Muslim murderers.

It is believed that Prahlad played a vital role to build a strong resistance in Sonakhali area for the hindus where 4 hindu activists of RSS were murdered on 10th February 2001 by Muslim goons namely Anar Molla, Iran and obviously a provocative Lokman Molla, a leader of RSP, South 24 Pgs District Committee. A non-manageable Prahlad did not stop his hindu activism for the hindus under pressure of muslims planning for a total surrender of hindus to them. For this charge a muslim comrade finished his hindu colleague without any hesitation. This news could not get any chance to crave any space in the secular press in West Bengal.

Such news covering pages after pages may not be sufficient to depict the persecution and perils of hindus in the present Bengal out of the new wave of GREEN REVOLUTION IN WEST BENGAL lead by Miss Mamtaz Banerjee. Sorry for the slip of tongue. She is Mamata Banerjee. This Revolution has no connection of the growth of paddy, wheat, jute, mustard or pulses in Bengal green fields. But obviously it has a dangerous connection with the growth of muslim population, muslim infiltration and increase of Muslim MPs in West Bengal.

So, the Green March from Bengal to New Delhi lead by Miss Mamata Banerjee is outstanding as the shrinking Bengal in many ways however now shining as a topper for producing the highest number of Muslim MPs from a state. Yes, West Bengal has the highest number of Muslim MPs in India this time. Though we see Uttar Pradesh in the victory stand as they also sent 7 Muslim MPs from UP in this election, the effort of Miss Banerjee is flanking high in the green-blue.

Readers may ask me a question about the Magic Trick of Mamata to Manipulate the Muslim Mass for this Green Mandate.

My simple answer is that it is nothing but the ugly appeasement of Muslims, it is the bare one in appeasement and this appeasement in its nudest nature, where the Bengali Hindus are the gross victims.

But it would be unfair if I do not mention the Green Border of Sarees, mostly preferred by Miss Mamata Banerjee. In every public occasion Mamata wants to symbolize her entity with the Muslim mass. So, she has to collect a presentable collection of Green Borders always. But I suspect Mamata has another mind-set for Muslim Brothers and Sisters of Bengal. She wants to spread this green colour from her border to the entire India, where there will be no tri-colour. Only one green will reign for an unique unification. No diversity then, that unity and universalization of the Green may be the optimum result of this Green Revolution of West Bengal.

Posted by Bengal Spotlight at 11:35 PM

Some of my friends requested me to give the details of Muslim MPs in the Current Lok Sabha.

There are 29 Member of Parliaments in India at present.

List of the 29 Muslim MPs in the New (15th) Parliament of India.