Franz Kafka (1852 to 1931) was a Czech writer, most famous for his novels The Trial and The Metamorphosis, where the Absurd, Grotesque and the Illogical were given a new life with impossible twists. The word 'Kafkaesque' has today transcended the literary realm and pertains to real-life occurrences and situations that are incomprehensibly complex, bizarre, illogical, often with a sense of impending danger.

The term 'Kafkaesque' could be very well applied to today's politics in India, for things have gone to such a pitch of absurd, unfair, blatant and outrageous illogical state that it baffles the mind. Yet, neither the politicians, nor most of the press, find anything wrong in it.
Just a few examples to illustrate my point:

Bharatiya Janata Party [Images] leader Varun Gandhi [Images] spent nearly three weeks in jail under the National Security Act, just because he said something which might be reprehensible. But many mullahs spew fire and venom in their Friday discourses -- but none ever gets arrested because riots would erupt immediately.

Svdhvi Pragnya, a Hindu monk, has been languishing in jail for months even though no conclusive proof has been brought forward of her direct involvement in the Malegaon blasts [Images] case. Recently she was reportedly assaulted by a Muslim inmate at a Mumbai [Images] jail and sustained injuries to her face, nose and neck.

But you have the Islamist leader Abdul Nasser Madani, an accused in the Coimbatore bomb blasts of 1998 which cost the lives of 60 people who was subsequently acquitted, and whose outfit the People's Democratic Party is campaigning in Kerala [Images] along with the CPI-M [Images]. Kafkaesque?


In Orissa, the police arrested BJP candidate from Kandhamal, Ashok Sahu, because among other things he accused the Church of using foreign money to induce innocent tribals to convert -- which is a very well documented fact.

On the other hand, terrorist Ajmal Kasab [Images], who went on a killing spree in Mumbai, is enjoying a royal life. Some 11,000 pages of the charge-sheet are going to be translated into Urdu because the gentleman has asked for it. Kafkaesque or not?

In the same way the President will not allow Afzal Guru, who was held guilty in the December 13, 2001 attack on Parliament, to be hanged till the election is over for fear of alienating the Muslim vote. The Congress keeps telling us that Indian Muslims are patriotic. Then why should it fear losing their votes when it hangs a traitor? Kafkaesque or not? You judge.

The Liberation Tigers of Tamil Eelam blew up in a totally senseless and cruel manner former prime minister Rajiv Gandhi [Images] just because he was on the verge of becoming PM again. But now, because the of the Tamil Nadu votes, Rajiv's widow Sonia sent an emissary to Sri Lanka [Images] to pressurise that government to effect a ceasefire just as it is about to wipe out the LTTE [Images] after 20 years of bloody civil war. Does it make sense to you? Isn't it truly Kafkaesque?

India is all about equality and rising above caste divisions, yet since 1947, politicians of this country, particularly the Congress and later V P Singh [Images], Mulayam Singh and Lalu Prasad, have hopelessly divided India along caste and religious lines. But Mayawati [Images] tops them all: she just gave a push to her prime ministerial aspirations by promising scheduled caste status to 16 more castes if she came to power at the Centre. Can you think of a more Kafkaesque way of obtaining votes?

In India you are supposed to spend not more than Rs 25 lakh of white money on your election. But everybody knows that to become an MP, you need Rs 10 crores, as you have to boast of a 100-car motorcade when you go campaigning, hire private planes, helicopters, gift free saris, dhotis, televisions, cash even, and much more. So where do you get the black money for this? From corrupt businessmen, from the the mafia, from kickbacks. Can you think of a more Kafkaesque situation?

Ultimately democracy in India has become a Kafkaesque affair, as it has been so perverted, so hijacked, to the point of the absurd.

The tragedy is that the Indian press does not play its role, because not many mainstream newspapers or television channels complained when Varun Gandhi was in jail, while Madani not only got away scot-free but has the full backing of a political party.The real problem is that India has been colonised for too long, contrary to China whose people remain proud of their culture and intensely nationalistic. It has resulted in a deep-rooted inferiority complex in the Indian psyche, where every intellectual is always looking towards the West for approval and Indians are so obsessed with having the Western type of democracy without adapting it to Indian conditions.

Our Chief Minister Buddhadev Bhattacharya is a self proclaimed fan of Kafka.

The 'Sushil Samaj' of Bengal, the 'neo pure intellectuals', however say that they only understand Kafka, Buddha doesn't. These right-turned-leftists and left-turned-rightists are the ultra hypocrite of any level. They will sell Bengal to some Mafias, Muslim Fundamentalists, Maoists, Anti Nationals, Anarchists, Corrupted Politicians and Businessmen. 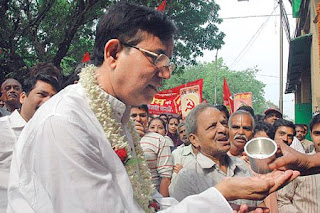