Violence erupts the day after Phase II in Election aftermath in Bengal. 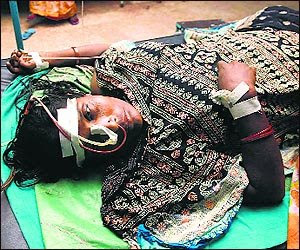 BURDWAN/SURI/HOWRAH/TAMLUK, May. 8: At least four persons were killed and a number of others injured as post-poll violence simmered in most districts across south Bengal that went to polls on Thursday. Violence in yesterday's poll had claimed five persons across Howrah, Burdwan and Midnapore East districts. Chief secretary Mr Asok M Chakrabarti conceded that the post-poll scenario remained volatile. "Violence has claimed some people. This is unfortunate. Police are at work and political parties have been urged to solve disputes with dialogue," he said. Today, two persons, purportedly Trinamul supporters, were killed and a number were injured in a clash between Trinamul and CPI-M activists in Burdwan district. Two more youths were killed and seven others injured in two separate incidents of violence at Bagnan in Howrah. Many houses were damaged and later burnt. In Burdwan, Rahamat Sheikh (36) was hacked to death and Mr Joydeb Bag (40) sustained critical injuries when they were attacked allegedly by CPI-M cadres this morning while on their way back home in Salon village near Kalna. Moinul Sheikh alias Nazu (40) was killed at Khanzi village in Ketugram. Nazu and six others, all residents of Khanzi and Khaspur village, had fled their homes following alleged CPI-M atrocities and had returned to vote only yesterday. CPI-M goons allegedly hurled bombs at them on the outskirts of the village. All seven were rushed to hospital with injuries. Nazu died this morning. Police raided Bonteer village in Raina, in search of four Trinamul supporters accused of murdering a CPI-M leader and allegedly ransacked and plundered at least 200 houses and shops owned by Trinamul supporters. In Howrah, Sheikh Sariful (16) was killed and his brother injured when some goons allegedly backed by the Trinamul hurled bombs at their residence at Chilampur. Police said the victim's father, Taher Ali, a CPI-M local committee member, had prevented some Trinamul supporters from entering a polling booth yesterday. A CPI-M supporter, Sheikh Saidul Haque (21) was killed and six others injured in a clash at Rabibhag in Bagnan this morning. Police said the seven were critically injured when Trinamul-backed goons hurled bombs at a shop where they had taken shelter. Haque was declared brought dead at a local hospital. To protest the murder of a child and a Trinamul worker at Satengabari yesterday, the Trinamul has called a 12-hour Nandigram bandh on Saturday. At Reyapara, a group of Trinamul workers allegedly left five CPI-M cadres wounded. Trinamul supporters tried to dig up a road at Raynagar to prevent the entry of police today, but police stopped them from doing so. At Dalimborchawk in Haldia, CPI-M-Trinamul clashes left 10 hurt. Six houses were also torched. In Birbhum, at least 11 people were injured in a clash that broke out in Md. Bazar near Suri between Congress and CPI-M supporters.Trouble erupted again late this evening at Satnara in Burdwan, when 19 Trinamul supporters including a lawyer of Culcutta High Court, Mr Pradip Dan were locked in a house and the place set on fire allegedly by CPI-M backed goons. A police contingent however rescued the men. Seven more houses were also set on fire by the goons. 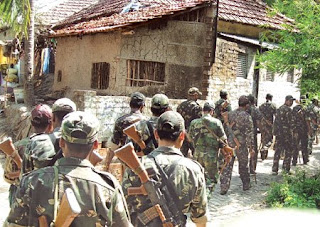 
As the ruling CPIM did not expect a stern resistance from the opposition, it saw a unprecedented rampage upon the Party Units in many places in South and Mid Bengal including some potential loss of its cadre also in the very poll day of 07th May.This hit of violence may affect the third and the last phase of Election scheduled on 13th May 2009.
In the chain reaction of revenge now CPIM managed the upper hand by creating a gross violences in the places of their early retreat.

The role of the Police is questioned again as it stands inactive in many places. As a protest the Trinamul Congress (TMC) called a 12 hours Bandh in Nadigram. In Nadigram 1000 supporters of anti CPIM force left the house as they apprehend dire consequences by CPIM leader Laxman Sheth, a sitting M.P. of CPIM Party.

In some places the CPIM Party cadres and the Police took part in joint action to evacuate the opposition parties from their field of resistance. The worst situation was seen in Kupila village where the patrolling panic forces of CPIM mercilessly rampage and beat the opposition. It erupts severe in Domkal Block in Hoogly in few hours.

The same situation made the whole thing a peril for the protesters against the Bengal Government ruling the State over 32 years, in many places in Bagnan, Jaypur, Shyampur in Howrah District, Kalna & Ketugram in Burdwan District, Mohammad Bazar and Nanur in Birbhum District, Chakdaha and Karimpur in Nadia District, and Pursura, Arambag, Khanakul, Tarakeswar in Hoogly District.
To check the situation Rapid Action Forces (RAF) have been deployed in many places including Mohammed Bazar in Birbhum.Out of a land dispute a TMC supporter was murdered in Baruipur, South 24 Pgs on Thursday last

Posted by Bengal Spotlight at 9:40 PM