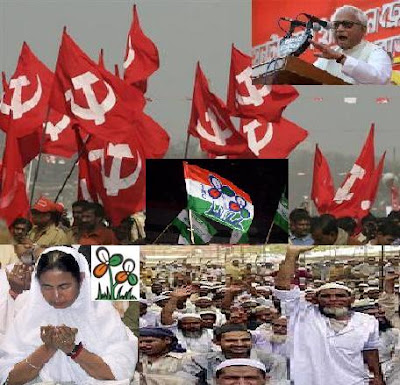 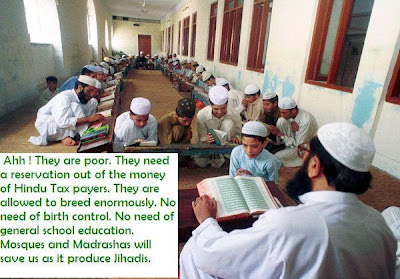 KOLKATA: West Bengal Chief Minister, Buddhadeb Bhattacharjee’s announcement in Kolkata on February 8 that Muslim OBCs in the state would now get 10 per cent job quota as recommended by the Ranganath Misra Commission is, no doubt, an election gimmick to fool Muslim voters. This is evident from the fact that the Chief Minister announced his government’s policy decision on job reservations within minutes of the Left Front partners’ meeting ended at the CPM headquarters at Alimuddin Street in central Kolkata. It is a clear attempt to win back the support of Muslims before the Congress decides its stand on the controversial Ranganath Misra report placed before the UPA government. With a dwindling Muslim support base to the Left that led to serious election reverses in the 2009 Lok Sabha polls, the CPM and its Chief Minister could not afford to wait for the Centre’s decision. There are elections to 86 civic bodies slated for this year before the final electoral battle for 294 Assembly seats in the state early next year.

The interesting highlights of the Marxist Chief Minister’s announcement on Muslim job reservations are: The OBC reservation list in West Bengal currently includes both Hindus and Muslims. Muslims are now to be put under a separate list called Backward Muslim Community. The new inclusion will take OBC reservations in West Bengal from 7 per cent to 17 per cent. Moreover, there is a paradox in Chief Minister’s claim that the proposed reservation is not on the basis of religion but on the basis of poor economic conditions. At the same time he has announced that Muslim youths under the OBC category can apply for job quota if their family income is below Rs 37,500 per month. Is it not a contradictory statement of Marxist Bhattacharjee that a Muslim family earning Rs 37,500 per month, not annually, is economically weak and needs job reservation? Yes, even if one takes present economic conditions of people in India irrespective of their religions and faiths, it cannot be said that earning of Rs 37,500 per month is a small amount and needed government protection. No doubt, job reservation was announced by Buddhadeb Bhattacharjee with an eye on Muslim vote bank.

Dr Pravin Togadia, VHP secretary general, has rightly said that Andhra’s 4 per cent quota and West Bengal giving 10 per cent reservations to Muslims are not isolated incidents. They are well connected and are a part of a larger conspiracy against Hindus. This criminal conspiracy of looting Hindus is being hatched to please Muslim vote bank. At this moment, 78 per cent Hindu youths in India are unemployed. At least 79 per cent Hindu farmers have lost their land and crop. Yet, instead of helping them, Congress and Marxist governments are showering favours on Muslims. There is no denying the fact that such job reservations only encourage conversions to Islam.

In fact, while turning down a similar move by Andhra Chief Minister, K Rosaiah, a seven-judge bench of the state high court observed that the government’s offer of 4 per cent reservations to Muslims is "unscientific, religion specific and potentially encourage conversions". This is not the first time that Andhra government tried to provide education and job reservations to please Muslims in the state. The late Chief Minister, YS Rajasekhara, had offered 5 per cent reservations to Muslims in July 2004. But Andhra high court had struck down the move at the time.

Taking a cue from Andhra high court’s ruling, Buddhadeb Bhattacharjee’s decision will be challenged in Kolkata high court by a group of nationalist lawyers. The state BJP president, Rahul Sinha, has announced that the party supporters will stage state-wide agitations against the proposed reservations for Muslims from February 13 onwards. Sinha told newsmen in Kolkata that the party’s national president, Nitin Gadkari will be visiting West Bengal during the first week of March to spearhead the agitation. Strangely, within 24 hours of the Chief Minister’s announcement, the state food and supplies department has selected 63 Muslim candidates out of a total 317 (17.5 per cent) for government jobs.