My name is Khan. My Boss is Dawood Ibrahim Khan. My mission is to accomplish Pan Islam. 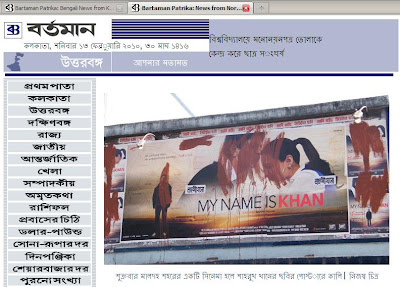 It is a mixed a reaction over the release of much controversial film My Name Is Khan (MNIK) screened by Shahrukh Khan (SRK) throughout India. Report of retaliation came from every corners from Bangaluru to Baroda, Delhi to Dispur, Mumbai to Malda. But the media accomplishers of SRK tried their best to promote the film MNIK, obviously sponsored by "D" Company. Dawood Ibrahim is still in the controlling position in the Mumbai Film Industries known as Bollywood. The producer Karan Johar of MNIK is nothing but a puppet here.

The retaliating people in Malda spoiled the banner of MNIK in a Malda Show House and spate and urinated upon SRK posters. This report could not been able to space a little into any Big News House like Anandabazar or Statesman. But they tried their level best to compare SRK with Lord Shiva as the Maha Shiva Ratri and the Mega Release of MNIK occurred in a same day.

The most fanky ( fan+..?..ky) like Maduchanda can worship SRK. But how she dare to compare Lord Shiva with SRK ? She can eat beef or share the bed with SRK or to send her mother to the grand father of SRK, anything else she wishes, but she must hold her endevour to dilute the height of Lord Shiva. The retaliation of Malda can happen into the metropolitan roads of Kolkata also. Then it will be a difficult situation for you like people around. Retaliating Hindus are now ready to fight the anti-Hindu stands in literature and journalism. Don't forget this.

But why this retaliation against MNIK or SRK ?

I am not a film critique. But must not be the same to discuss about MNIK or SRK, as the matter does not related with the content of the film at all.

When the heat of hallmarked 'Sing is King' was on in the multiplexes in India and abroad, the king-ships of Khans in Mumbai were challenged in a great extent as the Khan-nets and their big boss in Dubai understood it as a success of their rival Hindu-Sikh groups. It was an unbearable situation of the Islamists in Bollywood industries to see a fame of Indian-ness with a Hindu-Sikh brand of familiarization. Promptly a direction from the "D" company came to the devotee of Islam in the Mumbai Film Industries(MFI) to familiarize the Khan-ness of the Bollywood to the international community. This is the making of MNIK and re-crowning of SRK in MFI.

The long drawn process of 'Khan-Khana-Khan' to strengthen the grip of the Boss in Dubai, who spoiled a lot of Hindu actress to whistle his wishes, is nothing new to us. But the Hindu viewers are quite ignorant of this situation. As a result, standard-sub.standard-pre.standard, all the Khan bacchas want to be Amitav Bacchan. Everybody in Khans viz. Salman Khan, Shahrukh Khan, Ameer Khan, Fardeen Khan, Saif Ali Khan, Arrbaz Khan, Sohel Khan and so on deserve their hidden agenda to plan spoiling Ash to Amrita in many ways.

One scoundrel named Saif Ali Khan spoiled Amrita Singh for the years and divorced her with his two children and now throwing a spell of Islamic light upon Kareena Kapoor. What a bad luck to KK ! She is entering an ultimate process of tallaquk in Islam. The another hidden agenda of a Great Khan could not be materialized when Ash married an Avisekh of lower age to get rid of series of disturbance by that Khan. These stories are unfinished as the Islamic plans to encroach every sphere are enormous.

There was a time to disguise the name of Yusuf Khan to be a Dilip Kumar as hero. That was a different story. But now the Khans are overwhelming the MFI in every pride of Khans to allure the Hindu actresses and their girls are mysteriously absent in the Mumbai Film Industries now a days. Only two Muslim actresses are in the picture. Though both Katrina Kaif and Soha Ali Khan are of mixed blood. The days of Mamtaz, Saira Banu, Wahida Rehman, Nargis, Jeenat Aman, Parveen Babi are gone. "D" Company just restricted the entrance of Muslim girls into the Film Industries to make it as the play zone with Hindu girls by the Khan and other Muslim financers, producers, directors and actors. These Khan bacchas marry Sharmila, Gouri, Amrita, Madhuri and other Hindu girls, but never send their girls to Hindu families as a mark of so-called broadness of Islam.

Hindu cinema viewers do not understand this policy of making the Idealism of "Love Jihad" by promoting the trend of Hindu Girls from un-warranted Hindu Society by the Muslim romeos boosted by the Khans of Mumbai. Hindus should boycott these Khans and the idiotic fans like Madhuchanda. Congratulations for Malda activists who spate and kicked over SRK pics. Thanks to Bartaman News Paper to publish the picture inserted above.

Posted by Bengal Spotlight at 2:40 AM