Calcutta High Court directed to ban on Qurbani outside Slaughter House on Bakri Idd Day as not a mandatory religious act under Islam.
Under Islamic influence the Media suppressed the Land Mark Judgment dt.02/11/2011. 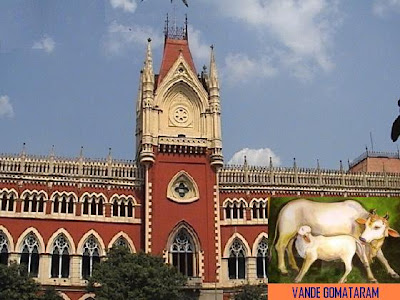 Kolkata, 3rd Nov, 2011 || In a land mark judgment passed on 2nd November, 2011, by the decision bench headed by Chief Justice of Kolkata, Mr J. N. Patel and Mr. Ashim Kumar Roy (J), the Cow Slaughter on Bakri Idd and trading of Cattle for sacrifice in Cattle markets have been banned by the Hon'ble Calcutta High court directing that "the all Officials o the State and local bodies have no power to facilitate holding of markets for trading of cattle for sacrifice and also the movement of cattle for the said purpose on the occasion of Id-uz-Zoha festival to be celebrated on 7th, November, 2011."

The venerated Bench had upheld the decisions and orders of the Apex court and others in the identical matters in 1994, 2002, 2003, 2004 and 2010 categorically directs the Chief Secretary of West Bengal : “ We, therefore direct the State Government through its Chief Secretary to see that such arrangement and/or markets in the State of West Bengal are not conducted for trading of cattle for sacrifice and which is otherwise not permitted under the West Bengal Animal Slaughter Control Act, 1950 and the Chief Secretary and all functionaries of the State and local bodies would strictly implement the order passed by this Court from time to time for effective and meaningful implementation of the said Act.” Even the Hon’ble Calcutta holds that “no such facilities can be provided for trading of cattle for sacrifice.”

On the merit of Order above of Calcutta High Court Order, Sri Ashoo Mongia, the chief of Rashtriye Goraksha Sena, (RGS), Pt. Yoges Shashtri of Arya Veer Dal and Some Go-Bhakta went to raid on 2-3rd November night in Dumdum area (KOLKATA) to capture illegal cow transport in Kolkata. While they captured some cows and calves at that point, the Police let them take away by the butchers and transporters on the plea on non-availability of any such strict orders passed by the Hon’ble High Court banning Open Cow Slaughter out side slaughter house including cow trading for Qurbani (sacrifice) with illegal cow trading and cow transportation for illegal sacrifice. At the time of rude scuffles and altercation Ashoo Mongia and the other cow savers were attacked by the Muslim hoodlums with deadly weapons. Though rescued by the Police, the Police on duty helped the Muslim Transporters to take away the cows in to the illegal markets in Kolkata. These are the notorious activities of the Police against the Court verdicts. The Police and Administration are doing rape over the Constitution and the Courts. The Muslims leaders are saying that they have won the case to run Qurbani without any impediment. The Govt. of Mamata Banerjee is all responsible for these flouting of Laws. Government should make aware the real facts through advertisement. No Cow Slaughter or Cow market should be made on Bakri Idd in West Bengal as per High court order passed on 2nd Nov 2011.

The teams of Rashtriya Go Raksha Sena headed by Ashoo Mongia and Upananda Brahmachari and Bangiya Arya Pratinidhi Sabha headed by Anand Sharma and Yogesh Shastri met various authorities in Administrative and Police Departments for appealing them to take the cognizance in case of flouting the Court orders in any manner.

In the due course of discussion with Mr Javed Shamim, Deputy Commissioner of Police (Control), Kolkata, the Rashtriya Go Rkasha Sena appealed to make a joint team to raid the illegal cow transport and cow markets around Kolkata.

Video of Illegal Cow Trading and Transport for Qurbani : RAID OF RGS IN KOLKATA.

Posted by Bengal Spotlight at 6:46 AM