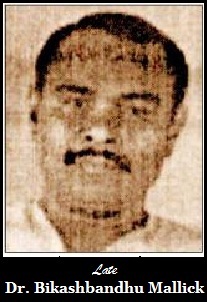 Apprehending Police inaction the agitating crowd rampaged nearby country liquor pubs and the illegal narcotic vending stalls and put fire on the hide outs of the anti socials, mainly from the Muslim community.

TOI Correspondent from Barasat reports:  ""A 62-year-old homoeopath, who was beaten up by a couple of drunken eve-teasers, died after a cardiac arrest in Barasat Kamdambagachi on Monday afternoon. One of the accused was later arrested from his hideout.

Bikash Bondhu Mullick was attending to his patients in his chamber when the two youths - Sheikh Jamaluddin and Sirajul Islam - started a drunken brawl outside his chamber. Mullick went out as the commotion grew louder.

He found the duo passing lewd comments at the teenage daughter of his neighbour. Though the girl was inside her house, Mullick protested against the duo's indecent behaviour. When they refused to pay heed, Mullick started shouting at them.

Jamaluddin then allegedly caught Mullick by a hand and started pulling him towards the road with Sirajul hurling a string of abuses at him. As the heated argument continued, the duo allegedly pushed Mullick, who fell over a tree trunk. Writhing in pain, he caught hold of his chest and fell unconscious. Sensing trouble, the duo fled at once.

Only then did Mullick's family members and other local residents muster the courage to come out. They took him to Barasat district hospital at once, but Mullick was declared dead. Mullick was known for his benevolent activities in the area and was popular for his good behaviour.

As the news of the death spread, a mob launched an agitation alleging police inaction against criminals in the area. They also claimed that police had refused to dismantle some temporarily constructed sheds inside a local park (Kola Bagan), which, they alleged, was a popular hunting ground for the goons. The locals burnt down the sheds and a ramshackle building where anti-socials gathered every night. Some hooch dens in the area were also destroyed.

"Seven to eight youths drink alcohol in the open every night. They tease young girls. No one can dare walk by the park. Drunken brawls are rampant. Despite repeated appeals, the police took no step," alleged Asim De, a local resident.

"My father had protested against the anti-socials several times. He was repeatedly threatened with dire consequences. He had recently undergone a bypass surgery. When they pushed him, he suffered a cardiac arrest and died on the spot," sobbed daughter Malati Mullick.

Within two hours of the incident, police swung into action and arrested Jamaluddin from a hideout at Purba Icchapur in Kadamba Gachi.

"We have already arrested one of the accused. Raids are being conducted to nab the others. A police picket has been posted in the area to avoid further violence. We are trying to find the other accused. The arrested will be produced in court on Tuesday," said a senior police official.""

As Late (Dr.) Bikashbandhu Mallick was very much popular for his dedicated medical profession and social services, a shocking grief overwhelmed the localities with a spate of rejection and  retaliation.

In the changed scenario of so-called 'CHANGE'  in West Bengal, the Hindu commoners here always fear an Islamic hooliganism where the Hindus are marginally or absolutely  minority. Though, the Barasat area is still of a Hindu Majority area, the persecuting nature of the Muslim miscreants is rampant over the Hindu 'jimmis'. The illegal Muslim settlers from Bangladesh are reigning the underworld of North 24 Parganas and they are the obvious cause of the criminal warfare in the sub-divisional town of Barasat.

The law and order situation in West Bengal at a stake due to increasing and sporadic Muslim Hooliganism under a passive support derived from minority appeasement policy of West Bengal Government.