Is Kolkata working as a functional Capital of proposed Greater Islamic Bangladesh?

NIA Revelation: ‘Greater Islamic Bangladesh’ is a threat to Indian Integrity and Sovereignty.

Is Kolkata working as a functional Capital of proposed Greater Islamic Bangladesh? 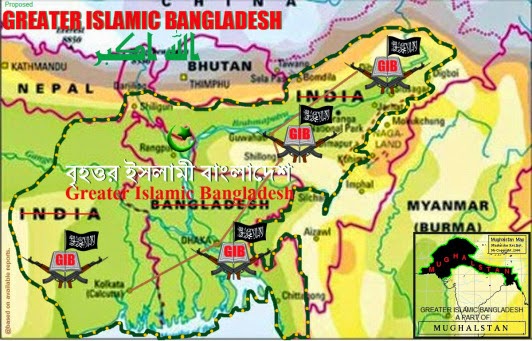 The National Security Adviser (NSA) of India, Mr Ajit Doval and the National Investigation Agency (NIA) Chief Mr Sharad Kumar made it clear that the operatives of the Jamaat-ul-Mujahideen Bangladesh (JMB) had used the state of West Bengal as a safe haven for ultimate Jihad over the past two years. The two chiefs had visited the state in connection of the probe on Khagragarg Blast and Shimulia Madarasa IED workshop. Consequently, the various Jihadi modules in Bengal, Eastern and North Eastern regions are getting a favorable weather in Kolkata and taking a generous hospitality in the 'City of Joy' (read 'City of Jihad') from ruling parties as alleged. Everything is waiting here for the next curtain raiser.

The NIA (National Investigation Agency) has smelled a deeper conspiracy of the establishment of a Greater Islamic Bangladesh hatched by the ISI (Inter service Intelligence) of Pakistan and DGFI (Director General of Foreign Intelligence) of Bangladesh with other terror modules engaged inBurdwan Blast. As per revelation through recovered documents by the NIA suggest that a bigger conspiracy was being materialised in different parts of Burdwan, Murshidabad, Birbhum, Nadia, Jalpaiguri and in different Madrasas stretched out in the border areas of West Bengal. The documents reflect that the terror modules working on brain-washing of the Bengal Jihadisto establish a‘Greater Islamic Bangladesh’ considering the territory of the last nawab of Bengal Sirajud-Daulah (1733-1757), as on 1750 AD, who was infamous for his anti-Hindu cruelty and debauchery. The proposed Greater Islamic Bangladesh includes whole of present Bangladesh, West Bengal, Assam, Tripura, Meghalaya, Tripura and parts of Bihar, Jharkhand and Orrissa.

The officers of Indian Intelligence say that the ISI and DGFI were taking the help of Jamat-ul-Mujahideen (JuM) of Bangladesh, Harkat-ul-Jihadi-Islam (HUJI), ArakanRohingya Islamic Front of Myanmar and Pan South Asian Militant Organisation of foreign roots. Simultaneously, Muslim United Liberation Tigers of Assam (MULTA), Muslim United Liberation Front of Assam (MULFA), Muslim United Volunteers Force (MUVF) are also engaged in this anti-national, subversive and Anti Hindu conspiracy. These Islamic forces are also active in various social media and internet by instigating Muslim youths to join in the module of ISIS (Islamic State of Iraq and Syria, now renamed as IS (Islamic States). They are depicting India as a ‘Fascist Fore) and ‘Slumdog’ and trying hard to raise social unrest and communal hatred. The unsanctioned Islamic seminaries (Khariji Madrasas) are working as the hatchery for sprouting Jihadis and bomb making factories to challenge the Hindu majority in West Bengal, as well as pseudo secular Govt in Bangladesh.

The Islamists engaged I this conspiracy calculating a demographic change of West Bengal through massive infiltration of illegal Muslims through West Bengal, Assam, Meghalaya and Tripura states of India. The investigations suggest that a huge influx through Karimganj, Dhubri, Kacchar, Barpeta, Hylakandi of Assam ; North and Western districts of Tripura; Western Jayatiya Hills, Western Garo Hills and South-East Khasi Hills of Meghalaya and the districts of Coochbehar, Dinajpur, Nadia, Murshidabad, Malda, Nadia and North 24 Parganas of West Bengal is perpetuating the demographic change of West Bengal to the goal of Greater Islamic Bangladesh.

In course of ‘Khagragar (Burdwan) Bomb Blast’ and ‘Shimulia Madrasa Bomb Making Factory’ investigations, NIA recovered documents containing the Bengali versions of the speech of Ayman Al Zawahiri and Mufti FazlulHaq of Taliban School. The infamous Mufti FazlulHaq of Bangladesh propagates the unification of Dhaka and Kolkata in a Greater Islamic Bangladesh. As per planning the Greater Islamic Bangladesh will move on an Islamic corridor connected with Kolkata-Dhaka-Shillong-Guwahati and Dibrugarh for its unhindered functioning.

It is now obvious that various terror modules along with some state authorities in Pakistan, Bangladesh and Saudi Arab are also engaged in the dangerous conspiracy of establishment of Greater Islamic Bangladesh. Sources said that huge funding was entered in the Bengal Terror Modules through Rabiat-Al-Islamiand Islamic Bank of Bangladesh. Central IB (Intelligence Bureau) sources revealed that a huge amount of 3.5 crores US dollar was arranged and donated by ISI through Islamic Development Bank of Islamabad to make a success of ‘Operation Pin Code’, the secret code for Greater Islamic Bangladesh through fanatic Islamic terrorism.

On the other hand a Kuwait based Islamic NGO named RIHS (Revival of Islamic Heritage Society) is helping a huge Jihadi fund in India in their recipients’ end in Dhaka, Kolkata and Guwahati and for fanning the Jihadi fume spread over Burdwan Blast and Shimulia rackets through Jamat-ul-Mujahideen-Bangladesh.

The Terror module of Burdwan Blast and Shimulia Madrasa Jihadi Rackets have earned and are procuring funds for the Talibanisation of Bengal as well as India throughSaradha Money laundering to JuM, Fake Currency networks, Cross-border Cattle Smuggling, Bank robbery and from other sources hitherto unknown.

As per Mr. DC Nath, an ex-Deputy Chief of Central IB, the ruling State Govt. headed by Smt Mamata Banerjee of AITC (All India Trinamool Congress) has an utter indulgence for making ‘West Bengal – A Terrorist State’, for the purpose of vote bank politics and culpable Muslim appeasement in Bengal.

NIA has cautioned the State and Central authorities that there are 58 existing Terror modules in West Bengal are working for waging the Jihad against India and National Security Advisor Mr. Ajit Doval handed over a list to the CM West Bengal comprising 180 Islamic Terrorist hiding in West Bengal for showing their Jihadi power in awaiting.

But, in an urgent report Mr Ajit Doval mentioned the proactive 25 -30 terror modules of the Bengal Jehadis are catering all these activities of subversiveness, treason and terrorism in entire Eastern and North Eastern region connected with Burdwan blast and Shimulia Madrasa networking. The report was also submitted to the Central Home Minister Mr Rajnath Singh. Most of these Jihadists are working in a camouflage of working as ‘Attar’ (essence), Burqa seller or otherwise engaged in ‘Jari’ embroidery work.

Now, it is a high point of perception that Jehadi modules of West Bengal and adjacent region that the Jihadists of Bengal are Kolkata as their safe and central place of entire operation. The alleged MP of AIDUF, Mr Badaruddin Ajmal connected with terror link and his lieutenants Mr Siddiqullah Chowdhury and others have penetrated in the politics in Kolkata and they are using politics as the front office and fuelling the Jihadi activism from the respective back office, as suspected.

Kolkata and its suburbs are being used as the sleeper cell of JuM to assassin Bangladesh Prime Minister, Sheikh Hasina in Dhaka. Is Talbanisation of West Bengal eventually posed as a major threat to the majority people in Bengal while such planning of “Bengal Caliphate” and “Greater Islamic Bengal” are spreading its wings in a clear sky of Jihad?

Interestingly, all the major Jihadi blast in India in recent past connect Kolkata as its source of strategy, money, logistics, devices and materials, networking and workmen force. The recent Khagragar and Shimulia episodes open that an amount of rupees 500 crores have been collected from Kolkata for Jihadi activities.

When the State authorities and the TMC run Govt in West Bengal are malfunctioning to check the Jihadi activities in the region, the sleeper cells of Jihadi modules are using Kolkata as de facto functional capital for the proposed Greater Islamic Bangladesh.

Courtesy: Links used above.
Posted by Bengal Spotlight at 9:35 AM