The police said they had seized chemicals, stamps and other equipment used for manufacturing fake notes, as well as forged notes of other countries, including the US, from Jaiswal's Maniktala house. "The seizure points at the existence of fake notes manufacturing units in the city and its surrounding areas," an officer said.

"We had a specific tip-off and rounded up Jaiswal from the intersection of Beadon Street and Amherst Street on February 27. We found 200 fake notes of Rs 1,000 denomination each on him," said Amit Javalgi, deputy commissioner of police, STF.

The STF team raided a godown in Domjur, Howrah, on the basis of what Jaiswal allegedly said during interrogation. "We found 450 gunny bags stashed with shredded Indian notes," Javalgi said.

But, what is being by passed or rather taken as a strategy to ignore the matter of recovery all such large scale counterfeit notes, raw materials including prohibited 'note dust' in a abandoned complex of "Siddique Iron and Steel Private Limited" at South Jhapardah, ONGC Road, Domjur, Howrah, 711405. And all these 'state of art' works for counterfeit currencies of India, USA, EU, Zimbabwe, Turkey and other countries were safely managed inside a company registered under RoC, Kolkata (Regi No. 131224 and Corporate Identification no. U27100WB2008PTC131224) and leveled with ISO 9001 2008 certified company. 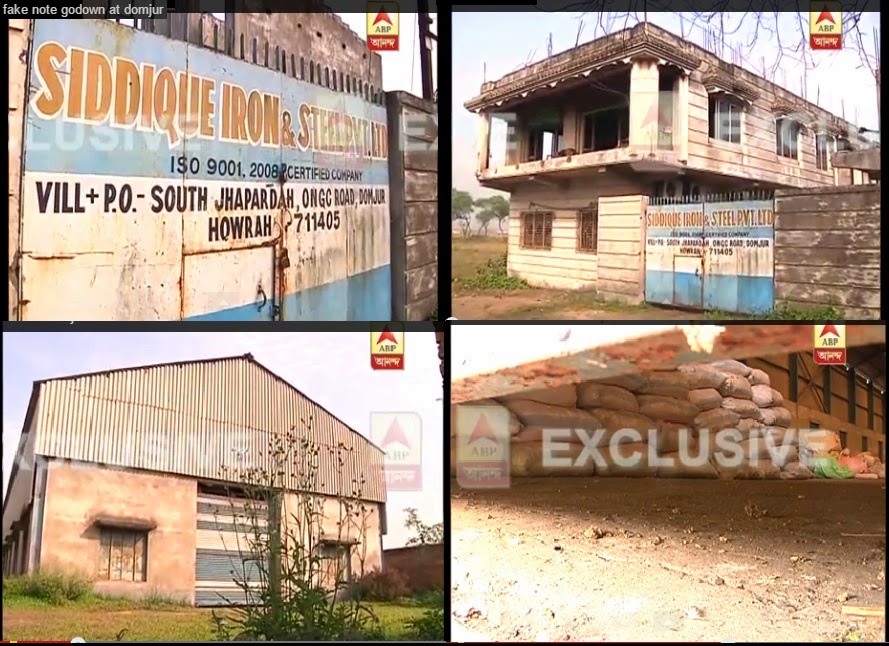 From an investigation it has been reveled that the Siddique Iron and Steel Private Limited was started in 2008 by Badre Alam Siddique of Murshidabad along with his nice Ayesha Khatoon. Available reports suggest that Ayesha is actually Bangladeshi resident and both of them run some mysterious business in Dubai and Dhaka.

It's a big question for the intelligence to nab these  Badre Alam Siddique and Ayesha Khatoon who allowed to use the company premises as godown or manufacturing unit for making counterfeit currencies of multiple countries under an international racket.

Badre Alam had another business under 'Xpres Tredkom Private Limited' at 223 Jodhpur Garden, Ground Floor, Jadavpur, Kolkata 700 045, which was closed prior to 2008 due to 'strike off'.

Interestingly, the fake note manufacturing unit at Domjur inside a ISO 9001 certified company, Siddique Iron and Steel Private Limited is still 'Active' as MCA status. But, the same company has also been listed in  Non-performing asset (NPA) under code NPA66809 with an asset value of Rupees 6.74 Cr. with an attachment of State Bank of India, had a call of auction on 8th August 2012. It is known that with a high arrangement with Siddique,  Jaiswal had took any entry to that almost abandoned steel company to start this joint venture.

'With the blessing of a local MP from ruling power in WB, bearing Arabic name, all these arrangements were materialized fast to open a new sector of profiteering industries'.  Public says all these without any  proof, but these cannot be ignored straightway, when TMC had its MP named Ahamed Hasan Imran, the founder member of SIMI and also connected with SARDHA Scam trail stashing unauthorized money to Bangladeshi Jihadi outfits, as alleged.

The police suspect more than one person's involvement in the racket and did not rule out links with terror outfits. "We have contacted central agencies such as the National Investigating Agency (NIA) to find out whether the fake notes were channelized outside the country for Terrorists activites," Javalgi said.

An STF officer said those involved in the racket had cracked almost all security codes of the Reserve Bank of India.

This apart, the police also seized fake currency notes of five other countries, whose valuation is yet to be ascertained. The police suspect more than one person’s involvement in the fake currency racket and did not rule out any links with terror outfits.

“We are trying to explore all the other angles of this racket – including links to terrorist outfits. We have also contacted other Central investigating agencies to find out if the fake currency was channelized outside the country,” added Javalgi.

The revelation of facts is urgently needed when Domjur fake note manufacturing unit has a close proximity to the Khagragarh Bomb making factory.

Kolkata and Howrah  are now attributed by the ruling party TMC for an unique dimension of probable white collared Jihadis over its blood stained Jihad so far noticed in Burdwan and Murshidabad.