Are we still hesitating to recognize the Re-claimer of Kashmir and the maker of West Bengal? Row over first martyr for national integration after 1947. 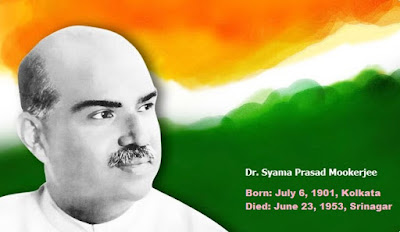 It has raised eyebrows in political circles because in the preceding Left Front government, no CPM minister had ever done this. Former chief minister Buddhadeb Bhattacharjee had stayed away from a programme organized by former Union minister Tapan Sikdar in Mookerjee's memory.

There is no politics in showing respect to a statesman, but the state government doesn't follow the same standards for every political stalwart. The move is being seen as a good gesture following the recent Narendra Modi-Mamata Banerjee bonhomie. 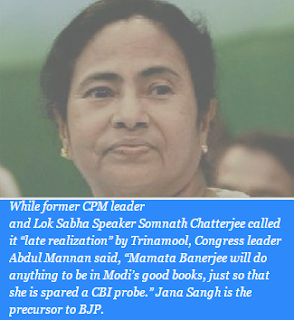 While former CPM leader and Lok Sabha Speaker Somnath Chatterjee called it "late realization" by Trinamool, Congress leader Abdul Mannan said, "Mamata Banerjee will do anything to be in Modi's good books, just so that she is spared a CBI probe." Jana Sangh is the precursor to BJP.

Minister Firhad Hakim and Trinamool MP Subrata Bakshi will offer floral tributes to Mookerjee at Keoratala crematorium on Tuesday. The Left Front government would place wreaths in his memory but it was an official programme, following protocol, said a former Left minister. Usually, officials from the information and cultural affairs department would place the wreaths. Nobody — Mookerjee's nephew, Justice (retd) Chittotosh Mookerjee — can remember any Left minister being present.


"We pay tribute to Syama Prasad Mookerjee on his birth and death anniversaries quite early in the day. I don't remember seeing a minister coming to pay tribute," said Mookerjee. Also, while the Mamata government did observe Yoga Day, state ministers stayed away from the programme.

BJP MLA Samik Bhattacharya sees the Trinamool government tribute as a healthy sign. "He is the nation's first martyr for national integration. It is due to him that Bengal is a part of India today," said Bhattacharya.

Courtesy: TOI.
Posted by Bengal Spotlight at 12:40 AM