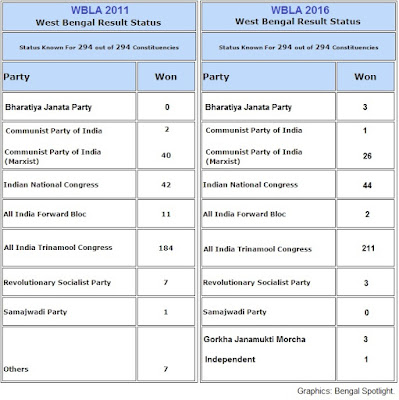 Islamic progression halted in WB Assembly due to crucial BJP politics this time.

Samudra Gupta | Spotlight Media | Kolkata | May 19, 2016:: The final tally of West Bengal Assembly Election, 2016 has been published by the Chief Election Officer some hours back.

All India Trinamool Congress will again form the ministry in Bengal by its thumping majority of  211 seats without any alliance out of 294 strength WB Assembly.

The Congress and Left alliance went for a very poor show with the defeat of Com. Suryokanta Mishra, the projected CM for the alliance.

For the first time, BJP is entering to WB Assembly with its highest strength of 3 MLAs including the victorious State President Dilip Ghosh from Kharagpur Sadar.

Earlier two MLAs of BJP in WB reached to Assembly through by-election and BJP never tasted the victory of General election so far in the State. 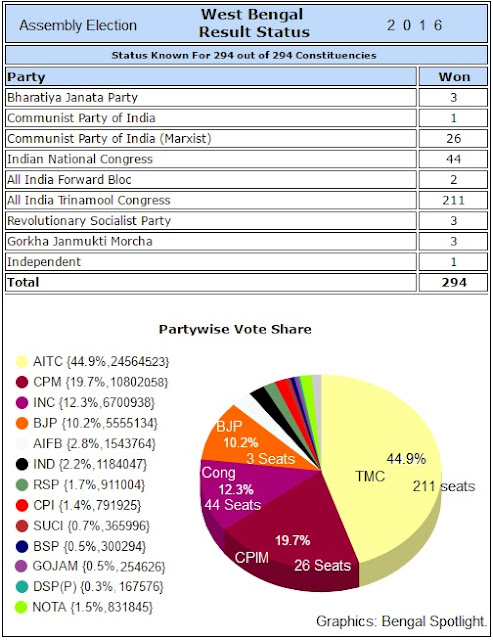 From this result it is very much clear that public has rejected the vested alliance of Congress and Left and eventually believed upon the much acclaimed 'development' by Mamata Banerjee without hearing anything about Sarada, Narada or collapse of Posta bridge etc.

This tremendous public support to TMC in this outstanding victory of Mamata and TMC will energize all in TMC to venture for more Sarada, Narada and Posta!

But, what is significant in this time that the run of Islamic Trojan horses towards WB Assembly house somehow halted as the numbers of Muslim MLAs have not been increased in comparison to the last Assembly position.

The Islamists in every political party usually design to increase the numbers of Muslims MLAs from their franchise and it was expected to cross the number of Muslim MLAs over 70 in 2016 WB Assembly as per their calculation done in Tipu Sultan Masjid and Furfura Shariff.

For the last two Assembly position the number of Muslim MLAs were increasing significantly. In 2006  there were 45 Muslim MLAs in the WB Assembly, which was increased as 60 in 2011. But, this time in 2016  the increase has been halted as the number of 59 MLAs will be seen in the Assembly floor.

The year-wise details can be obtained from below: (Click the links below to get details) 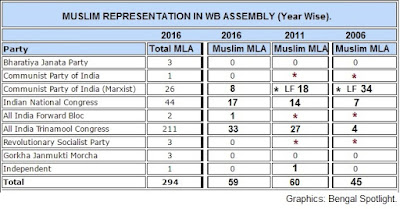 From an analysis it is detected that the presence of BJP politics in West Bengal has critically polarized the Hindu votes such a manner when some winning Hindu MLAs have been favoured by BJP vote sharing to make a defeat to their Muslim contenders.

Such examples are seen in various places like Raniganj where a Hindu candidate from CPM defeated the Muslim TMC candidate by 12385 votes and BJP candidate got 32214 votes. Meaningful Hindu votes from BJP were not allowed to TMC here and that is the sole cause of defeat a Muslim MLA in this Assembly.

In Islampur where win of Muslim Candidate is a phenomenon, this time a Hindu candidate named Kanialal Agarwal of INC won the game by defeating TMC's Muslim candidate and Ex Minister Abdul Karim Choudhury by 7718 votes. Soumyaroop Mondal of BJP got the substantial 18668 Hindu votes. If the BJP candidate could not be successful to snatch a big number of Hindus votes from TMC, there would be another increase of a Muslim MLA in WB Assembly.

This crucial role of polarizing Hindu votes in favour of BJP caused a substantial defeat of many Muslim candidates this time including Rampurhat where BJP candidate Dudhkumar Mondal shared 25480 votes and Muslim candidate of Congress defeated by 21199 votes.

Crushing the constant humiliation of BJP by a section of Bengal Media including ABP Ananda, BJP this time shared a of 10.2% total votes, which has really played a crucial role in Bengal politics.

In the system irony of present election procedures, this 10.2% votes give only 3 seats for BJP. Whereas, only 2% increase upon this vote per cent i.e. 12.3% votes give a total of 44 seats to Congress making them fit for the post of leader in opposition.

Anyway, the five year planning of Bengal Islamists to make more MLAs in successive Assemblies in the favourable situation of 'minority appeasement' and 'Muslim vote bank politics', has been shattered to some extent this time as Islamic progression is halted in WB Assembly now due to crucial BJP politics.

Obviously, this is a success story of BJP politics to arrest a Political Jihad in West Bengal, though a little. Otherwise, there will be 70 Muslim MLAs in WB Assembly at least.

But, the three BJP MLAs viz. Dilip Kumar Ghosh (Kharagpur Sadar), Manoj Tigga (Madarihat) and Swadhin  Kumar Sarkar (Baishnabnagar) in the new  Assembly have their heavy task to chase three most communal persons in the floor of the house. They are Siddikullah Choudhury (Mangalkot), Abdur Razzak Molla (Bhangore) and Hazi Nurul Islam (Haroa), all from TMC.

This analysis seems too much communal to a part of TMC supporters and others. But, there are many winning TMC candidates like Jogaranjan Halder (Kulpi), Manturam Pakhira (Kakdwip) or Dipak Halder (Diamond Harbour) who are likely to understand the essence of this analysis and obviously who thank silently the BJP voters for their intelligent shifting of support to TMC for which they defeated their Muslim contenders put by the  Congress-Left alliance under a culpable communal motive.

Posted by Bengal Spotlight at 1:26 PM

A strong, apt analysis....this is indeed a substantial approach to halt the Islamist onslaught in the Legislative Assembly and also in the legal scenario.