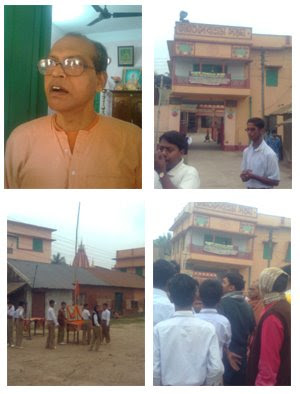 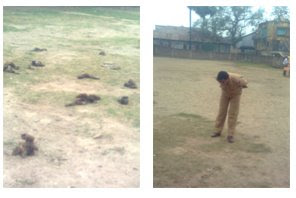 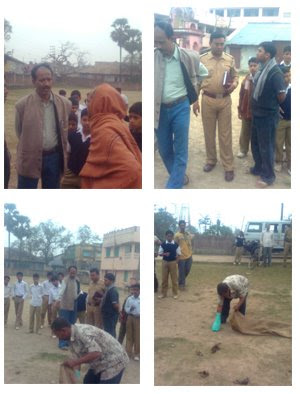 The morning walkers at the play ground of Pranav Vidyapeeth , a High School run by Bharat Sevashram Sangh, Diamond Harbour , South 24 Parganas ,West Bengal saw an unprecedented event on 26th January, 2009 morning. The play ground was filled up by flesh ,bones, hoofs of cow here and there which struck the attention of the morning walkers, local RSS workers hold morning sakha everyday in that play ground and the students of Pranav Vidyapeeth gathered there to observe the Republic Day Function on that day.
Seeing the filthy atmosphere in the ground, the perturbed and agitated Hindus there informed the matter to Swami Amalananda, the In-charge of Diamond Harbour Branch of BSS & the Secretary of the School concerned. The anxious and shaken students and their guardians also contacted Upananda Brahmachari ,one of the State Leader of Hindu Samhati and a resident of Diamond Harbour Town. Sri Brahmachari rushed to the place of occurrence immediately and met Swami Amalananda and the greatly displeased people there.
The BSS authority informed the matter to Diamond Police Station and Sri Brhamachari reported the matter of public sentiment to the SDPO Diamond Harbour. As a matter of fact the observance of Republic Day Function by the students was not possible before cleaning the ground properly.
The Local Police Authority took the matter seriously and came to the spot within 30 minutes to tackle the matter before spreading any agitation or something further. Swami Amalananda and Upananda Brahmachari interacted with the Police Personnel on duty there. The contingent with the Police Force cleared the ground and cleaned the fleshes, bones and hoofs etc. littered in the ground.
Sri Ratan Ganguly, Sub Inspector & Investing Officer, Diamond Harbour Police Station requested the people gathered there to keep peace & maintain the law and order. He also requested the BSS authority to deploy night guard and to give some information about the suspected culprits.
For the last few years, some muslim unruly young men have been trying to disturb the Hindu Functions many ways including teasing the Hindu girls coming to perform Maha Shiva Ratri at Shiva Mandir within BSS campus. Though some local Hindu Activists protested the matter, the reluctance of the major Hindu people some time energize such muslim miscreants.
In the last year on 5th July night, an unknown person from Mograhat ( a mini Pakistan inside India), threatened Swami Amalananda over telephone to refrain him from any Hindu Dharmik Activities including giving any permission for conducting any Hindu Programme in the BSS premises, by other Hindu Organisations. This has also been reported the Police Authority.

It may be mentioned here that before Durga Puja in October,2008 some HUJI & SIMI outfits in Beldanga Murshidabad, threatened Swami Pradiptananda, In-charge BSS Beldanga Branch for stopping Durga Puja and other Hindu Functions in the Beldanga Ashram premises and within entire Beldanga area as such things are not tolerable by the pious muslims there.
Repot: Sambuddha Gupta.
The 26th January,2009

Posted by Bengal Spotlight at 7:17 AM