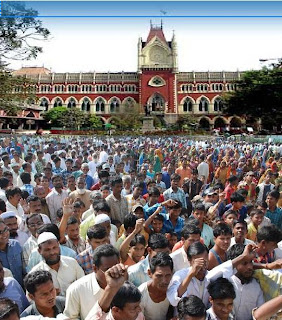 Whatever the score cut is in the Guangzhou Asian Games 2010 for the Bengalis, the West Bengal State Govt (read as Ruling Fascists CPIM Party) and the opposition side (consider it as preposterous Trinmool Congress), both of them are wrestling for the Gold Medal in the “2011 State Assembly Election event”, wooing the minority vote-bank through blatant appeasement of the Muslim Minorities in Bengal.

When a sinking boat of Left Front tries to manage a safe anchoring by its navigator like Abdul Razzak Molla (as projected as next ever Muslim Chief Minister of Bengal), the racing car of Trinmool Congress aspires to touch the victory line of ‘Change’ with a bosom co-pilot like Idrish Ali or Taha Siddique, allowing the share of the prize money in the shape of a Deputy Chief Minister, if entered into the Writers’ Buildings. The Muslim quota is now all set to the mind of Bengal politics for its survival for the power to rule.

In an interview, state cabinet minister Abdul Razzak Molla publicly announced once that if Ms. Mamta Banerjee allows a quota of 25% reservation in Railway employment, then he must join TMC, leaving CPIM without any hesitation. Though it lies with the statistics about the push of minority people in the Rly employment so far, the State Govt rapidly announced a 175 crore rupees development package for the Muslim minorities of Bengal including two Muslim universities, huge loans from West Bengal Minorities Development & Finance Corporation for the Muslim unemployed youths and covering 90% of the Muslim population under the Reservation Quota under the severely backward status in the OBC (Other Backward Classes) in West Bengal. This ought to be a point of irritation for the Scheduled Caste, Tribes and OBC people who is supposed to be a deprived section after having a continued reservation facilities in the face of non-implementation and sarcasm for it.

As a result, the reservations for Muslim OBCs, announced by the West Bengal government, have come under the scanner of the Calcutta High Court, as challenged by some forums connected with the interests of OBC people under Hindu fold.

A Public interest litigation (PIL) was moved in the Calcutta High Court today challenging the notifications issued on September 24, 2010 by the state government for the reservation of the Muslim OBCs.

The president of the Confederation of Other Backward Classes, SC, ST and Minorities, a social organisation, Nilmadhab Karmakar, filed a PIL on 12th instant seeking an order to strike down the notification of September 24. Hearing the petition today, the Division Bench of Chief Justice Jay Narayan Patel and Justice Ashim Roy directed the state government to file an affidavit within four weeks. Counsel of Karmakar advocate Kartick Chandra Kapash pointed out that the state government had declared reservation for the OBC under two categories — A and B. In category A, there are 56 castes, of which 54 belongs to Muslim OBCs. [ Category A is ment for severely backward – more than 90% is Muslim and Category B is meant for moderately backward – more than 80% is Hindu]. According to the notification 10 per cent posts in government service, local and statutory authorities and educational institutions would be reserved for those castes prescribed in category A, under a top most priority as policy decision. And seven per cent posts in government service would be reserved for those under category B. According to category B, several castes belonging to both Hindus and Muslims would get the benefit of reservation, under general priority.

Senior counsel for the present PIL, K C Kapash told that the State Govt adopted a discriminatory policy dividing the OBC people on the basis of religion of Hindu & Muslim, which is not only un-constitutional and un-ethical, it will surely promote communal disharmony in the long run as an obvious effect.

In the earlier instance, another PIL was filed in the Andhra High Court to restrain that Andhra Pradesh Govt for allowing such communal reservation for Muslims. Joydeep Mukherjee, an eminent Lawyer of West Bengal is contemplating another suit to Supreme Court of India in the same matter, as per available references. But the question before us, what the intention of the Government and the Opposition is. Whether they want to promote a Sharia Law for the Shariat loving people with the help of the all constitutional facilities or its total violation. Or, otherwise, a full constitutional supports and privileges to those public who strictly adhere the secular constitution without any religious law to strike out the secular identity of Indian Constitution. A serious matter to think about.

Posted by Bengal Spotlight at 2:05 AM