No place of subversive Kashmiri elements and their allies in Kolkata

Azad Kashmir propaganda not to be allowed in Kolkata 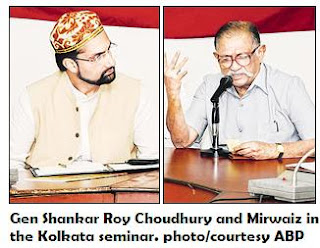 There is no place of subversive Kashmiri elements and their allies in Kolkata. Kolkata has shown strong sentiments for the sacrifice of Dr. Shyama Prasad Mookherjee, who sacrificed his life for the Kashmir cause in favour of National integrity. In two successive efforts, the Hurriyat and Pro-Pakistan subversive elements tried to establish their footprint in Bengal soil with the help of some Maoist organizations and obviously under the spectrum thrown by some anti national intelligentsia powerful in the media and various suspected NGOs. But the youth of Kolkata heavily retaliated over the issue in each of two incidents, first at Jadavpur University and the next in Academy of Fine Arts. Also the patriotic part like Gen. Shankar Roy Choudhury (Retd.) has also disclosed the attitude of the separatists in the name of Azadi -Independence.

It is shameful for the Bengalis that two names are now booked by the Delhi police to take part in such 'Anti India - Pro Pakistani - Kashmiri Azadi Propaganda' under the scanner of Delhi court. The infamous Arundhati Roy and Sujato Bhadra have finally come out from their camouflaging human right activities and shown their Maoist interest to free Kashmir certainly under the direction of China itself.

Just before Kolkata, Mirwaiz was heavily punched on face by some retaliating members of Kashmiri Pandit and Sikh organisations at Chandigarh. Before that Arandhuti had to face a pungent retaliations from the Kashmir loving people for her 'Separate Kashmir' opinion given at a Bhubaneswar seminar.

The patriotic forums in ABVP (Akhil Bharatiya Vidyarthi Parisad) and BJYM ( Bharatiya Janata Yuva Morcha) are ahead to protest everywhere to unmask the fifth column, growing so dangerous getting help for propaganda from the State itself. The demand for banning such pro-pakistan seminar is now getting strength nation-wide. Some patriotic forums in Kolkata have taken resolution not to allow any Azad Kashmir seminar in the city.

The Kolkata reports are given in details below. 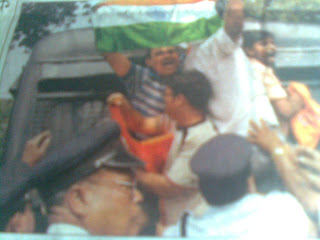 Kashmiri separatist leader Mirwaiz Umar Farooq was heckled by activists of the Bharatiya Janata Party's youth wing for his alleged anti-India statements at a seminar here on Sunday. More than 20 activists were arrested, police said.

The Mirwaiz, addressing a seminar at the Academy of Fine Arts here, said that Kashmir is a disputed land and the Indian government should realize the strong sentiments of 'azadi' of the people of the Valley.

When former army chief General (retired) Shankar Roy Choudhury, one of the speakers at the seminar, asked him if he considers Kashmir to be a part of India, the Mirwaiz promptly said: "No, Kashmir is a disputed land and we want a solution."
...................
Choudhury was critical of the Mirwaiz and his azadi sentiments. He said that Pakistan is backing the separatist movement in Kashmir.Read details here...........

Again the Hindu Activists opposed the Azad Kashmir and the nexus between Muslim Jehadists and other anti Indian elements like Maoists. But this time in Kolkata, the opponents clashed each other and the Jehadists were compelled to run an off-show.

After the seminar in New Delhi demanding `Azadi` for Kashmir, a similar seminar also titled `Azadi` was organised at Vivekananda Hall in Jadavpur University today (30th November 2010) by a Maoist student group called UDSF (United Students Democratic Front) with the notorious secessionist and accused in Parliament Attack case, S.A.R. Geelani as the main speaker. At the outset of the seminar, a speaker Mr. Siddhartha Guha Roy gave a speech in which he harped on the so-called `independent` history of Kashmir and asserted that Kashmir should be separated from India. All over the venue, posters and banners put up by the organisers openly demanded `Azadi` for Kashmir. When a member of the audience Mr. Arun Shaw asked the speaker a question about the role of Shyamaprasad Mukherjee in integrating Kashmir with the rest of India, the Maoist organisers suddenly rushed towards him and started an unprovoked physical attack on him. There soon started a free for all with the organisers using sticks and rods which they had stocked beforehand for an obviously pre-planned attack, to beat up all the patriotic members of the audience mostly ABVP (Akhil Bharatiya Vidarthi Parisad) and BJYM (Bharatiya Janta Yuva Morcha) activists who had gathered there in large numbers.

The Times of India Reports : Sangh bid to disrupt Geelani speech at JU

Posted by Bengal Spotlight at 9:25 PM