Come back Taslima :: Activists call for Taslima’s return to Kolkata 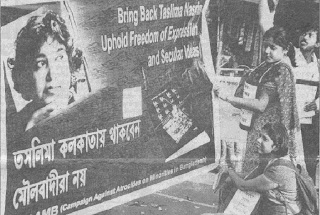 So far three long years passed away stealthily, still Taslima Nasreen is yet to come back to her most beloved city of Kolkata, due to the pressure of communal elements and obviously for the indulgence of the vote – monger political frenzies, allowing free hand to the fundamental freemasons.

Many award winners viz. Kurt Tucholsky Prize, Sakharov Prize , Ananda Literary Award and many others, Taslima Nasrin took refuge in West Bengal in 2004 as driven out from Bangaladesh by the fundamental Jamat-e-Islami Party in 1994 under the regime of Begum Khalead Zia, the then Prime minister of Bangladesh.

But, Taslima was compelled to leave her second home, by facing a staunch opposition from the orthodox Muslims through a drastic rioting in Kolkata in Nov, 21st, 2007, out of an irritating debate for her book “Dikhondito”.

Since then, some human right activists and forums of intellectuals advocating free-thinking, free-speech and free-writing conduct a protest meeting against “Anti Taslima propaganda by the fundamentalists” and the inaction of the State to “Bring back Taslima to uphold freedom of expression and secular ideas”.

These ‘human rights’ forums and the ‘save the nature’ organizations under the banner “Paschimbanger Janney” (i.e. For the cause of West Bengal) and CAAMB ( Campaign Against Atrocities on Minorities in Bangladesh), jointly organized a sit on demonstration on 21st Nov. 2010, afternoon in front of Academy of Fine Arts, Kolkata. The mum assemblers distributed leaflets, displayed banners and posters and demanded return of Taslima to her loveliest city of Kolkata, again.

From the organizers it was briefed to the press that all the political parties are playing the ‘religious card’ to make gain in the minority vote bank, whether they are in the Government or in the opposition side. So all the parties including their intelligentsia have drawn a nefarious design to disprove the return of Taslim in Kolkata. As per Mohit Roy, a key person in CAAMB, “this is quite contradictory to call this city as a citadel of freedom of expression, when the rights of a writer and a humanist are infringed in such a way in the hands of fundamental hooliganism”.

Through the leaflets, the organizers tried to convey that despite of canvassing the ideals of secularism and opposing the practice of any religion by the Communist, the ruling Left Front Government in West Bengal uses to capitalize the bare religious sentiment of a particular community. And the opposition also in the fray of such appeasement that occurred the situations like Taslima to Deganga. The organizers expressed their deep concern when the

impartial Bengali society finds the similarity between CPIM, Trinmool or Congress in the issue of political appeasement to a particular community. They said that in this matter of appeasement and instigation to a particular community, there is no difference between Mohammed Salim Of CPIM, Idrish Ali of Trinmool Congress or the Siddikullah Chowdhury of Jamat e Ulema Hind.

The assembly opposed the interference of the State in the matter of Freedom of a Writer in connection with constructivism in ideas and ideals.

The crowd for the gathering in a very good numbers marked the eminence of so many personalities in the sphere of literature, art & culture, social activities and other fields, including Mohit Roy and Chayn Roy (CAAMB), Swati Mitra ( Women against oppression), Deboyoti Roy (Ambedkar Study Circle), Srimanthan Arya (Rashtriyo Adhikar Mancho) and Prokash Das(Swadesh Samhati Sangbad). 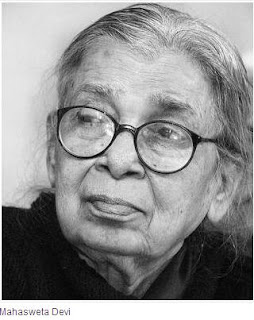 On the third anniversary of the departure of controversial Bangladeshi author Taslima Nasreen from the city on Monday, Bengali writer and activist Mahasweta Devi demanded that the exiled author, be allowed to return to Kolkata and implored “those in favour of change” to join her in the cause.

Mahasweta Devi, who is known to be close to Trinamool Congress chief Mamata Banerjee, invoked the party's slogan of “change,” in a written statement stating her demand while also criticising the Communist Party of India (Marxist).

“I also ask those in favour of change to come forward,” she urged questioning why a writer will not find a place in the city of literary greats like Rabindranath Tagore and Kazi Nazrul Islam.

All kinds of criminals can stay in the city, but Taslima can not. Her only fault is that she is a writer, Mahasweta Devi added.

“The way Taslima Nasreen was forced to leave the city is one of the reasons why CPI (M) is being asked to leave West Bengal. The notice for her departure was an unpardonable offence,” she said.

Mahasweta Devi's statement was read out at an event organised by Women Against Oppression, an organisation that observed the day as “Lajja Divas,” a day of shame. Activists claimed that both the State Government and the opposition were distancing themselves from Ms. Nasreen for the sake of vote bank politics.

Following violence in the city by protestors of the All-India Minority Forum, Ms. Nasreen was moved to Jaipur on November 22, 2007 and there after to New Delhi. Eventually, she was asked to leave the country only returning at intervals wait-ing for her visa to be rene-wed.

Ms. Nasreen, who has maintained that she would prefer to live in Kolkata – “her second home,” is currently living in New York. 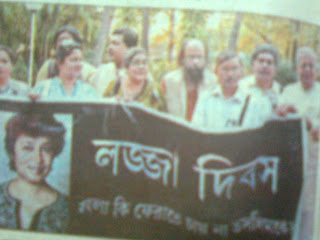 Kolkata, 22 Nov: Intellectuals today observed Lajja Diwas, organised by an NGO, Women Against Oppression (WAO), and demanded that Taslima Nasreen should be brought back to the city immediately.

Several members of the civil society gathered at the Press Club today to observe Lajja Diwas, the day when Taslima Nasreen was forced to leave the city on 22 November, 2007.

Mr Sujato Bhadra, social activist, slammed the state government for not being able to take a firm stand on the issue. He said that Taslima was forced to leave not because of religion but because of political gains.

The fact that the Union government has to keep her in an undisclosed place proves its failure in providing safety to artists and writers. It is indeed a matter of shame that a writer had to leave the cultural capital, that is, Kolkata, he added. “It is a secular country and forcing someone out on the pretext of being unreligious is totally unacceptable,” he said.

Mr Pachu Ray, another social activist, said that if indeed winds of change are blowing in the state, let Taslima’s return to the city be a part of it. Reiterating that the state government has failed to protect her rights and given her honour she deserved, he demanded that she should be brought back to the city and accepted here immediately.

The intellectuals further said that creativity is being censured everywhere in the country be it burning author Rohinton Mistry’s book called Such A Long Journey in Mumbai or be it uproar over MF Hussain’s paintings.

Poet Joy Goswami was also present at the meeting and condemned attack on literary personalities.

The decision to ask Bangladeshi writer Taslima Nasreen to leave Kolkata is one of the reasons why the Left Front government in West Bengal will have to go, noted writer Mahasweta Devi said.

In a written statement to the NGO the Magsaysay Award-winning writer said the move happened “under pressure from a particular group of people”.

“To take away the freedom of writing from a writer is not justified and we want Taslima back in the city,” she said and appealed to those working for bringing about a “change” in the state to fight for the writer's return.
Posted by Bengal Spotlight at 6:08 PM

These Campaigns need to be more organized and publicized.....
Mass agitation of Hindus in required in WB...