Raj Khanna from Diamond Harbour || December 23rd 2011 - Under some obnoxious connections of Diamond Harbour local administration and the Islamist groups active in the locality, a hectic process of reconstruction of a bigger Mosque than before is going on in the very protection of the concerned Govt. authorities violating many civic laws and the direction of the Hon'ble Supreme Court of India.

As per available reports, a RTI activist and local leader of Hindu Samhati, a prominent Hindu Organization in some parts of West Bengal put an application before Sub-divisional Officer (SDO), Diamond Harbour to look into the matter for its right and justified disposal of the same.

As per Order of the Hon'ble Supreme Court of India, all the religious structures/shrines are to removed in a time frame for some reasons as held by the bench of  Justice Dalveer Bhandari and Justice Mukundakam Sharma on 31st July 2009.

But, violating all the norms and the Order of the Supreme Court of India, the SDO Diamond Harbour has given the permission and helping the same to reconstruct a bigger Mosque in the premises of Diamond Harbour Criminal Court, with the help of some Muslim Group headed by one Raich Molla of Mandirbazar, South 24 Parganas. Sources said that this Raich Molla has an immense influence over the Diamond Harbour SDO and controls all the tenders etc. to see the interest of local Muslim businessmen and the unauthorized money market. Moreover, this Raich Molla has illegally occupied a portion of a land owned by a Hindu Religious Trust namely "GOPAL JUE TRUST" at Tirtha Kuthir, Hazi Building Para, Diamond Harbour.

This reporter has been able to capture the video footage before and after the demolition (for reconstruction purpose) of the impugned Mosque structure, from where it is evident that a bigger Mosque is going to be erected there with the help some mysterious Islamic funding to reconstruct the same very unlawfully. It has been alleged that a fund of  Rs. 10 lac has been given as bribe to manage the permission of the illegal construction of the mosque and the mosque will be reconstructed with another Rs 5 lac from that mystery source. As a matter of fact the Islamic Groups involved with illegal money market are funding huge amount to construct or reconstruct or to renovate the Mosque all over South 24 Parganas (all over West Bengal also).

The RTI and Hindu activist, Sri Haran Chandra Mondal wanted to know from the authority that :

As per Right to Information Act, 2005, the concerned authority is bound to give the available information within one month after submission of the application with due charges for the same.

It has been gathered that the President and Secretary of the Bar Association of Diamond Harbour Criminal Court, Mohammad Nurul Amin, Advocate and Sri Sudipta Chakroborty, Advocate, respectively are morally helping the Islamic group to erect a bigger Mosque under the Islamic dictum of Trinmool Congress party as they both holds position in the party to see the minority interest even at the cost of violation of rule of the land and the verdit of Hon'ble Supreme court of India. 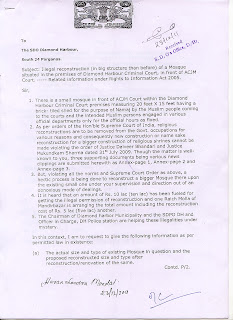 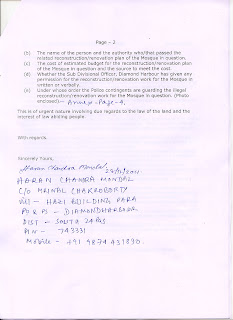 Posted by Bengal Spotlight at 6:45 AM