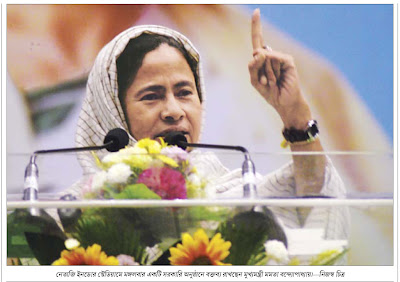 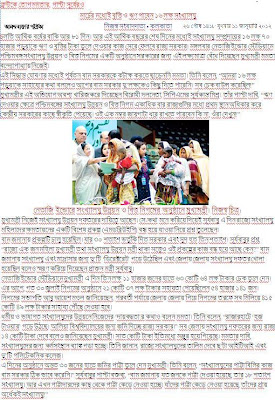 On 10th January, 2012 the onlookers Bengali Hindus again witnessed Mamtaz Banerjee’s concern to the Muslim People and her reluctance to minimize the increasing Muslim appeasement in a row of contest with her predecessor Left Front Govt. in West Bengal. But Mamtaz Banu Arjee is trying to break all the previous records on Muslim appeasement along with her day to day practice in Islam.

At a programme organized by the West Bengal Minorities Development and Financial Corporation at Netaji Indoor Stadium, on 10th January, Tuesday, the Trinamool Congress chief again took a swipe at Congress and CPM in various matters including the minority development (read Muslim development) in the state of West Bengal now renamed as Paschim Banga.

In the row of Muslim propagation, she tabled one trump card of Nazrul Islam by establishing a Nazrul Academy in the premises of Indira Bhawan premises in Salt Lake, Kolkata for running a new venture to represent Nazrul as a devout Muslim rather than a devotional sadhak and writer of hundreds of Shyama and Shyam Sangeet. Perhaps this project of Nazrul Academy will be a vicious tool to represent Nazrul as an Islamist rather than a symbol of patriotism in Agniveena. It is heard that two chairs of Aligarh University will be placed there in Nazrul Academy.

Referring to Congress without naming them, she said some parties, along with CPM are making an issue of Nazrul Academy, she said. "I know Nazrul had to leave India. We didn't pay him due respect. At his birthplace in Churulia, CPM has its party offices. We're trying to regain what we'd lost in the last three and a half decades. Now CPM and their political friends are pointing fingers at us. Let them do that, this will not deter us from our path." 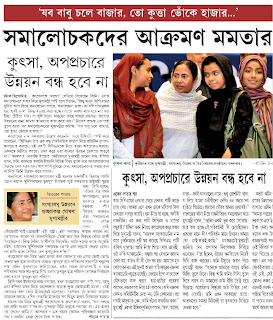 But what she done tremendous for her beloved Muslim students and youth is a distribution of Rs 63 Crore and 64 lac to 3 lac 11 thousand Muslim minority boys and girls through West Bengal Minorities Development and Financial Corporation (WBMDFC). West Bengal Chief minister also declared that with March 2012, the rest 16 lac 70 thousand minority students (out of which 95% are Muslim) will get their loan and scholarship through WBMDFC without any hindrance.

Highlighting the steps taken by her government for minorities, Mamata said the minorities welfare department will spend its allocated Rs 415 crore by March, 2012. The branches of minority affairs department will be set up in every district, she said. "For setting this up, we've already sanctioned Rs 7-crore of the allocated Rs 14-crore." she said.

Mamtaz Banerjee also referred her sanction of 10000 madrashas for her 1000000 Muslim brother and sisters, up-gradation of three Haj Towers ( Rajarhat, Kaikhali, Park Circus), sanction of 60 bigha land in Rajarhat prime area for New complex of Aliya Madrasha University, promotion of two Aligarh University complex at Murshidabad and Bhangore and regularization of salary or the teacher and staff of 650 Madrashas at top most priority.

Leader of the opposition Surjya Kanta Mishra alleged the state under Left tenure had not only set up departments - but carved out two directorates - for minority welfare. "The government is yet to allocate funds for a scheme targeted to empower minorities women. We'd also tried to ensure OBC quota, which has stopped now. Before criticizing, I wish to inform her that the WBMDFC was awarded by the Centre for its performance, I hope she can maintain the number one status," he said.

It should not be forgotten that in the July last (July,2011) an amount of Rs 21 crore and 37 lac was distributed to 54,141 minority beneficiaries by the same TMC led Govt. through WBMDFC, just after Mamta Banerjee was sworn in as Chief Minister of West Bengal on 20 May 2011. 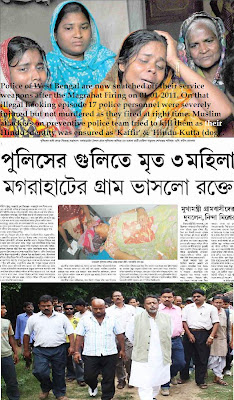 Referring to the issue of renaming Indira Bhavan as Nazrul Islam Bhawan, another point of confrontation between the two allies, the West Bengal Chief Minister (CM) said, “There was a Nazrul Islam Academy at the ancestral house of the poet at Churulia in Burdwan district. The CPM turned it into a party office. If I set up a Nazrul research centre what is your problem,” making it clear that she would not budge from her stand on the issue.

“I want to set up a research centre there (at Indira Bhawan) for students of both India and Bangladesh where he had gone to spend his last days. Nazrul Islam was not the leader of a community but he was the leader of the nation. I am telling the CPM and its friend (Congress), you cannot stop development by resorting to road blockades. You have got everything, the sky, the road, the house, why don’t you leave some space to Nazrul Islam,’’ she said.

From here it is also clear that the Bengal CM wants to make this Nazrul Academy as a anti Indian Hub of some Bangladeshi Muslim intellectuals and Jamati students who are actually connected with the conspiracy of ethnic cleansing of Minority Hindus in Bangladesh.

This vulgar appeasement of Muslims in west Bengal in the name of minority development has created a gross dissatisfaction in the level of administration and bureaucrats in West Bengal including a part of the Hindu Trinmool leadership who are actually negated from their seniority and legitimate rights.

In recent ‘illegal hooking’ (electricity) episode in Nainan area (under Usthi Police Station) and the ‘illicit hooch’ (chullu) episode (under Mograhat Police Station) the decisions taken by  West Bengal CM were totally in-discriminatory and anti-administration. The police and the local administration were in-dignified very lowly with some undue punishment to Hindu officials only to appease and satisfy Muslim people and the Muslim leaders at a time. 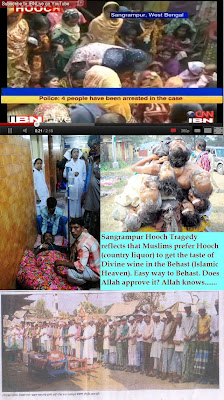 The police firing in the village of Nainan of Mograhat in South 24 Parganas District on 1st December, 2011 left two women and one child dead. All the victims were Muslim. Mamata declared Rs 2 lakh compensation to the family with possible job offer.

The “hooch tragedy” claimed around 163 lives. This incident happened on 14th December, with mainly rickshaw-pullers, hawkers and labourers falling ill suddenly after swallowing illicit liquor ‘hooch’ in Sangrampur area of South 24 Parganas District. Most of the victims were Muslim. The CM of West Bengal declared compensation of Rs 2 lakh (plus Rs.10 thousand for last rites) to each family without job offer. To take the advantage to alienate Muslim supports from opposition CPIM, the TMC leaders told even ‘CPM mixed poison’.

With these two incidents Mamtaz had to spend around another 5 crores with a sense that ‘illegal electricity hooking is legitimate rights of Bengali Muslims’ and the ‘Muslim hooch victims are considered as the martyr for the Nation’.

With the blessing of Mamtaz Banerjee ‘Madrasha’ was inserted in the name of ‘Aliya University’. Now it is ‘Aliya Madrasha University’. With the ardent initiation of this CM of ‘Paschim Banga’, the word ‘Muslim’ will be inserted in it very soon. Then it will be ‘Paschim Muslim Banga’.
Posted by Bengal Spotlight at 2:29 PM

We have seen Mamta as a dynamic leader but this opportunism will surely fail her at any cost and teach her a lesson but do we have time to experiment. Wake up India and throw such leaders away and bring in real patriots to rule the country for the real welfare of the nation, Jai Ma Bharti!