Rise of a Green Leviathan from an Islamic Sea of Bengal. The magic wand in the dirty hands of Mamtaz.

Secularism In Bengal Back As Boomerang For Public Politicians And Media. 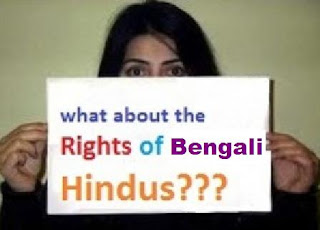 Titu Shadowson | Asansol News | April 21, 2012; Asansol: The media after the Indian unrest prior to the transfer of power 1947 hardly had any patriotic role for uplifting nation and society. The media always counted cash from anyway it come through. The most glaring example for the same can be seen during the Jihadist bomb-blasts, rather than telling us the pain of the victim they sympathize the family of the bastard perpetrator jihadists.

But now it seems that the anti-Hindu policy that media propagated and sponsored is back as boomerang to haunt them only!

On 19 April 2012; Talat Shahmeed, the chairman of minority cell of Burdwan District Industrial Congress Committee with a number of supporters handed over a memorandum to the SDO demanding the ICDS recruitment forms to be republished and the advertisements to be given to all the Urdu papers. “Because the advertisements were published in all Hindi, English and Bengali papers, our girls were uninformed and they could not apply. It must be republished and so on all the Urdu papers.”

Talat also blamed that even as the government is giving the Muslims first preference in all sectors, why they are prevented from the mainstream?

Man, this is called “chori aur sinazori”, “ulta chor kotwalko daantein”. The Muslim leaders and their follower mass are so mindlessly hypocrite that none can measure. The mainstream follows Hindi and English or Bengali (of course in West Bengal) be it anyone in Bengal. But muslims want separate aspects in everything, they are demanding those stuffs in Urdu. The communal to the core muslims forced the government for the advent of special law for the Muslims, they don’t follow the law of the nation. They themselves are out-stream and blame others for out-streaming them. Height of hypocrisy!

Now where is the loss of media? Since when media is in loss by the virtue of this pro-muslim secularism praised by them? Knowingly or unknowingly it’s the general public is always in the loss. Public elected those politicians who are hell bent to cut their electors own rights.

Take the case of Mamata’s announcement of giving 3 lakh Krishan credit cards to the Muslim peasants in Basirhat? This comes in a time when the farmers are committing suicide. She urged the public not to sympathize the suiciders. She maligned them as taking crores of rupees as lone and never to pay back. But when it was about the muslim farmers, she forgot that her departments are lacking the fund. She decided to arrange not just one or two, but 3 lakh krishan credit cards. Strange! Mamata Bannerjee and her TMC is probably most interested to feed the most expensive Kabab and Biryani to muslims on return of the starvation of Hindus.

And take the case of the education sector. 10000 Madrasa or the Muslim education centers are about to get government sponsorship. We all know, what the madrasas teach the disciples world-over: terrorism, but perhaps Indian Madrasas have some kind of unexplained magic: they can never be like the others. Ok, in a pseudo-democratic state we are forced to accept the government views. Well, then a large fund is needed to fulfill the promise. Adds to that Mamata’s donation from state-government’s fund, 16 Lakh scholarships to Muslim students. Now in the debt-ridden state who will provide the fund? Answer is simple and obvious, as illustrated on 20 April: government sponsored Khalsa Girls School a Sikh (Hindu) named school was decided to be de-sponsored by government. When the students blocked the Jadubabu Bazar in Kolkata, the principal of the school was threatened by the TMC operatives, many of whom are obvious to be Hindus. Strange morons are these Hindus, they are instructed that cut your throat and you will get mango juice from there. And believe me, Hindus are doing that.

Now our great political intellectuals probably still maintain their secularism. Because they are hardly touched by the grief of public, their safety in their only concern. Then they must revise their views by now. Secularism is back to haunt them too!

And now come to the operatives. Lakshman seth was arrested but Shikur Ali was spared. I know, even now the above namesake Hindu, known anti-Hindu communist leaders will stick to secularism and praise it. But truth is truth and they must regret it. Well, at least they are getting what they deserved, I am happy.

So finally the media will probably think, how are they harmed ?

If, all the funds are expended in giving adverts to Urdu newspapers, how will they get any cash? Anandabazar Patrika for its recent clashes with TMC, Aajkal, Ganaskati etc for constant enemity wont get anything anyway. And God prohibits, if funds lack, whih is more than obvious, how will pro-TMC non-Urdu channels get anything anyway????

So media is probably in its way to get what it deserved. It got the secularism-boomerang back to hit it.

Mamata Criticism Is Not Blasphemy. She is going out of limit due to her idiocy.

This psychic phenomenon happened to so many dictators in past, they have styled themselves sometime as the representatives of God or sometime as God himself. Mohammed and Akbar are only the glorious illustration of that phenomena, the first one claimed himself as the only channel of communication to Allah. And the other one, on the same line first created his own religion Din-e-Elahi and then claimed himself as God Himself, rewrote a verse “Allahu Akbar.”

Now similar phenomenon can be seen in an Indian Bengali lady, who is a masterpiece to confuse the others. Yes, you are right; I am talking about Mamata Bannerjee, the CM of West Bengal. She made us confused in so many issues; she is Ms. or Mrs. Is she Bannerjee any more or not? And more surprisingly the Bengali Hindu leader and Master Blogger Upananda Brahmachari (of HinduExistence.wordPress.Com) has raised a question whether she is Mamata any more or have been completely converted to “ Mamataz”.

Last week a chemistry-professor of the Jadavpur University in Kolkata was arrested just for forwarding a cartoon drawn by someone on the issue of Firing Out Of Dinesh Trivedi By Mamata. The arrest was too dramatic. The professor Ambikesh Mahapatra received an email in his email id provided by the New Gadia Cooperative Housing Society which he forwarded to some society members. Like Hitler had his Gestapo spread in every nook and corner of his Nazi Germany, Mamata’s TMC Gestapo is working on the same line. They informed the local TMC leaders. Well somehow Mamata’s TMC has been a mixture of KGB and Gestapo. KGB of Russia was never entitled to report anyone for its deeds. TMC operatives needed no permission from anyone. They assembled near the residence of the professor. With threatening slogans they entered his house, roughed him up, and reportedly molested the females. In any other situation it would be the professor to lodge FIR to the police and get the hooligans arrested. But this time after the hooliganism, police played its TMC-role; arrested the professor instead with his neighbor Subrata Sengupta.

At this arrest people may probably assume that the cartoon certainly contained adultery or abuse. But in reality nothing was there. The messages inside the bubble are not even funny. Mamata in the cartoon is showing Mukul Roy the railway ministry and saying, “Look there Mukul. That’s golden fort.” At this Mukul is saying showing Dinesh trivedi, “That’s very cunning man.”

The cabinet ministers came out with democratically camouflaged statements, “Law will perform its duty,” – Madan Mitra who also said, “A teacher is not expected to do this.” Do what? Abuse someone? That can be done at best by the CM. She has set up example of worst foul language after becoming CM. She knows that she cant make any long run, longer than 5 years, so she wants to get the paradise in this short span only. And to ensure her little probability for the repeat performance as a CM she wants to hush up all the democratic and critic voices. When she knew that already 65 persons have been sent the mail, she was afraid just like these 65 would be mighty enough to bring down her power. But you know, fake God proposes, real God disposes. Now the cartoon is being forwarded at GP rate, more than 65,000 have already got access to that. Do the Bengal’s jails have that much space to accommodate all those “blasphemy” specialists?

But there are some issues where they don’t divide; in fact they become one to condemn something. Remember the cartoon of the Islamic prophet? The entire communist, socialist, capitalist and all the other types of whatever –ist possible, channels were condemning the cartoonist who drew the real nature of the prophet Mohammed.

However there is another kind of issue where they don’t divide; in fact they become one to patron something. The cartoons harming the Hindu sentiments. Striking similarity no?

Let us expose the hypocrisy of the TMC’s almost mouthpiece Kolkata TV and News Time of Rose Valley group. They both have hired the greatest cartoonist of Bengal, Mr. Sentu who runs the Trendy Toons Production. His show on political comedy is telecasted in both channels. In Kolkata TV it is named Chandipath and in News Time its called Narader Kutkachali. All are related to Hindu religious Gods. There are so many nasty mockeries happening over there but here none sees any blasphemy. Why? Because they are no God in Bengal, the only dictator almighty in the Islamic green Bengal is Mamata Didi@ Mamataz Apa by the will of Allah.

Remember when there was a great controversy was going on the distortion of history of Rishi Aurobindo Ghosh, the great Bengali freedom fighter, Bengalis were busy with Mamata. Really from the hall of fame the Bengalis have shifted to hall of shame. Its fine for the TMC people if they consider Mamata to be their liberator, but it’s a sign of disaster if the Bengalis forget the real liberator, Rishi Aurobindo Ghosh.

Mamata will do so many nasty things in upcoming future. She has already blacklisted some Hindu leaders who are constantly exposing her jihadist face. In fact she has issued an SMS to discourage those voices. Here I am quoting the copy of the SMS.

Some unscrupulous people are transmitting provocative and indecent photographs for hurting the religious sentiments of people and disrupting communal harmony. The government has already started an investigation in the matter and will take strong action against those people. I appeal to all communities to frustrate the designs of those unscrupulous people and maintain peace and communal harmony.


By communalizing the news about her own communalism she wants to hush up the last bit of secular voice inside West Bengal. Its high time for the people of Bengal to frustrate none but Mamata and dismantle her nefarious designs.
Courtesy: Asansol News.
Posted by Bengal Spotlight at 9:08 AM

Labels: Bengal Islamists, Cartoon and Picture controversy in Bengal, Mamata Banerjee, Mamata Criticism Is Not Blasphemy, Secularism in Bengal back as Boomerang, What about the rights of Bengali Hindus?