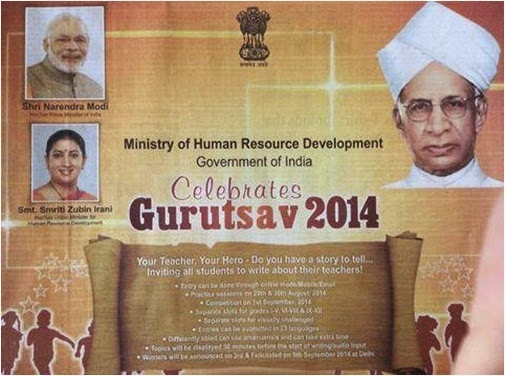 Upendra Baral | BSNN | Kolkata | 04 Sept 2014:: TMC has perhaps drawn an all out non-operation line of action in the upsurged investigation scenario and enticement of Saradha Cheat Fund probe by CBI.

Now the ruling TMC has started direct denial to the Central Govt Programs with lame excuse as seen in a tussle of State Education Department and HRD (Human Resource Development) in the Union Govt.

Government schools in West Bengal will not make any arrangement for students to watch Prime Minister Narendra Modi’s live address on Teachers Day and many private schools too may skip the programme under their influence.

West Bengal Education Minister Partha Chatterjee said on Wednesday that there was neither the time nor the infrastructure for making such arrangements in schools.

“We will be very busy with our own programmes. Our Chief Minister Mamata Banerjee will felicitate teachers at Netaji Indoor stadium on the day,” he said.

Not only that, two education department officials were removed from their posts on Wednesday for allegedly uploading on the department’s website a circular stating that the schools in three districts would have to arrange for broadcasting the Prime Minister’s programme on Teachers’ Day.

The government had showcaused the two officials and ordered a probe against them on Tuesday.

A source said showcause notices had also been issued to the inspectors of schools of the three districts — Nadia and North and South 24-Parganas.

“The government cannot take any punitive action against the officials as they are yet to respond to the showcause notices. The government will decide whether they would be punished or not after receiving their replies,” Chatterjee said. 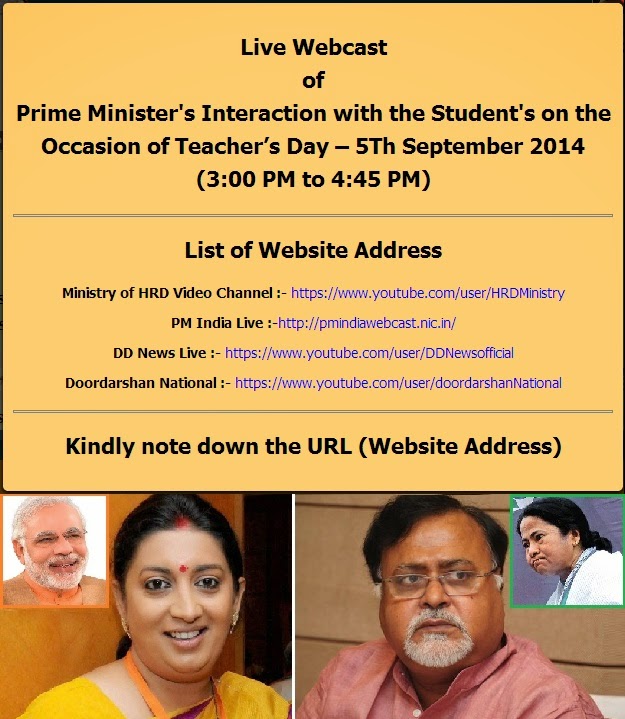 The minister, however, made it clear that stern action would be taken against the officials if the probe found them guilty.

The notification, originally issued by the human resource development ministry, appeared on the school education department’s website at 5pm on Tuesday. It was removed at 6.30pm at minister Chatterjee’s behest.

The circular stated that the schools in the three districts would have to arrange for TV sets, projectors, screens and amplifiers for the 3pm-4.45pm broadcast on September 5.

“I have told the officials concerned that we can’t telecast the speech in schools as we have our own event on September 5,” Chatterjee said.

An annyoing Education minister of West Bengal Partha Chatterjee clarifies that "about 100 teachers from across the State will be awarded ‘Shiksha Ratna’ by the government on September 5".

Many private schools under TMC influence in the city too said they would not be able to make arrangements for the programme.

But, Mahadevi Birla Academy principal Anjana Saha when contacted said arrangements were being made for screening Prime Minister’s interaction but since most of the students leave for home after 2.30 pm the school authorities are not sure of how many of them would attend it.

Hertiage School principal Seema Sapru said the school was encouraging students to watch the interaction, the first of its kind, at home since the school gets over by 2 p.m. and the authorities would be busy with their own programmes on the occasion.

Modern High School principal Devi Kar said the authorities would not be able to make any arrangement for the screening.

But, the question is very alarming that how a state department can negate a central govt programme for a political aversion or hegemony so far.

Amidst this row over Prime Minister Narendra Modi's planned interaction with students on Teachers' Day, HRD minister Smriti Irani said that the participation of students in the event was "voluntary".

She stressed that September 5, the birth anniversary of former President the late S Radhakrishnan, will continue to be celebrated as 'Teachers' Day'.

"This particular activity is voluntary in nature. If it is being politicized, then I would say it is regrettable," Irani told reporters when asked about the objections raised in some states over the Centre's directive to them to ensure students' participation in the event.

States like West Bengal have voiced dissent over the entire exercise with its Education Minister Partha Chatterjee saying they have little time in which to make the necessary arrangements for it.

Eminent Educationists and some lawmakers both in the ruling and opposition parties also condemned the matter of rejection of PM's web speech or interaction with the students in school in a special day dedicated to the Teachers of the country.

Actually, Education is in the concurrent list of 7th Schedule in Indian Constitution. So, State cannot go such in a whimsical way to scrap a National programme for educational purpose.