Muslims vandalized Hindu areas and business at Usthi in West Bengal with the help of State Minister. 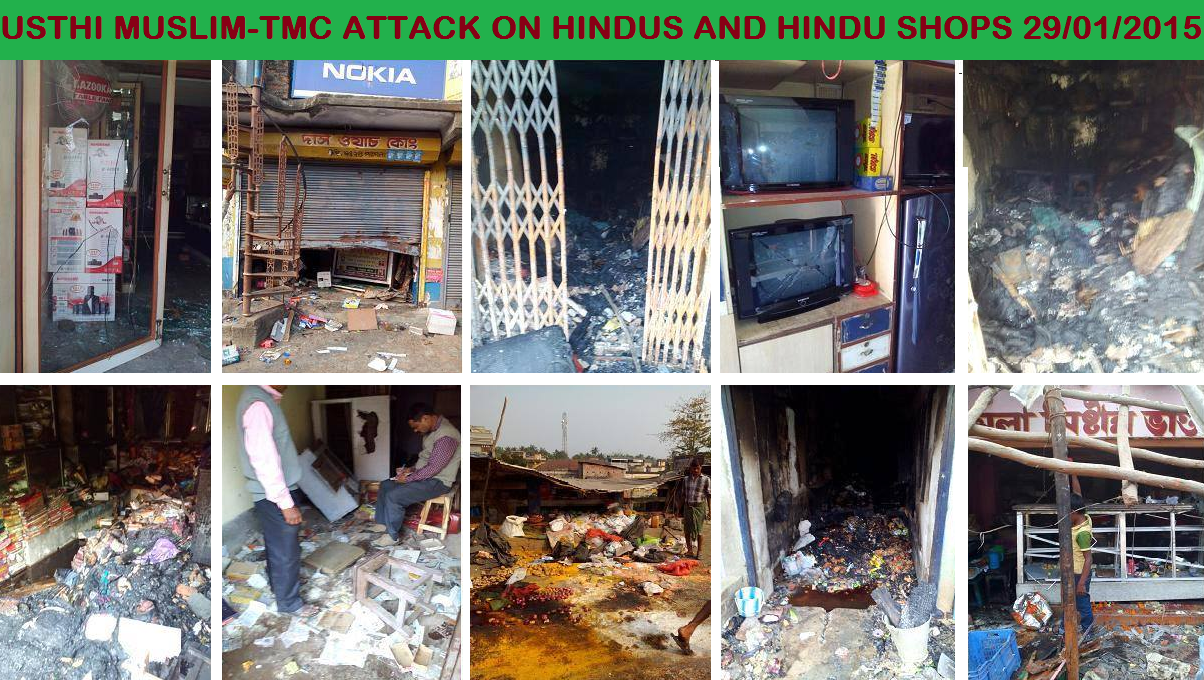 
It is alleged that Md Giyasuddin Molla, the Minority Affairs Minister, WB and TMC Leader of the area was guarding all Muslim areas with his pet goons and restraining Police to enter into the Muslim villages where anti-socials have already taken position. Police started random searching and torturing in Hindu villages. The situation may be deteriorated if the Central BJP and Police do not take immediate steps.

Some small groups of Hindu Jagaran Manch and Bhavani Sena are giving some protection for Hindus. But, big bosses like RSS, BJP, VHP etc.are away from the areas of disturbances as reported. Muslims started rally with brandishing swords and ire arms when reports came in last at 2.30 pm on 29/01/2015.

When we wanted to know the cause of this communal flare up in Usthi area, then a local youth Sameer said,  "On 27 th evening there was a ruckus between the Hindus and Muslims in a matter of way back to a Saraswati Puja Immersion. Muslims assaulted a Hindu youth on the way back to his home. Hearing this Hindus retaliated. The matter did not shape into an end there. Muslims organised themselves through Loud-speakers of nearby all Mosques and thundered over Hindus. Local Hindus are fighting to save their position without any help!". Other source said that it was a family scuffle between Hindu couple when a Muslim passers by badly intervened. Actual cause is still unearthed.

Hindu Public conveyed their de-satisfactions as There are many Hindu Orgs and BJP in South 24 Pgs, as per information but no  team from them were seen in the area or to interact with the police as perhaps they are busy otherwise. Bengal Media is supressing this news as usual. 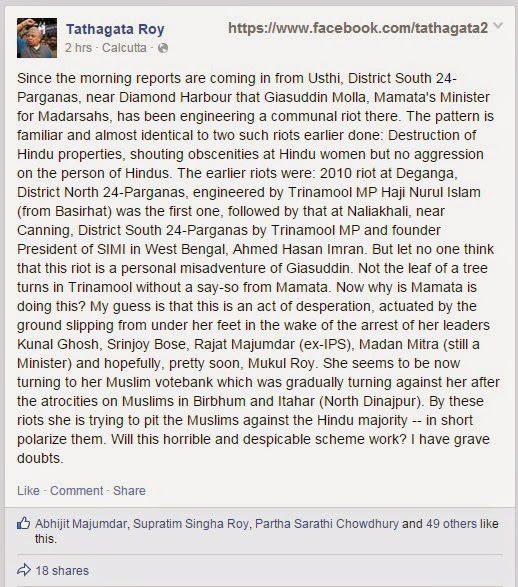 
Notorious criminal Kalo(Ajijul Sarder) and his gang were seen with Local TMC MLA sharing Tea each others.  This Muslim gang is politically sheltered & protected by local MLA & Minister (Minority Affairs Dept.) Giyasuddin Molla.  Molla was present there to lead the Islamic looting on Hindu shops.

This mayhem was little bit controlled by the RAF and Armed Police Forces not to cause  of looting any Muslim shop in the same market. Two Hindu shops were burnt to ashes. Sec. 144 Cr. P. C.  was imposed to control the situation afterwards.

As the news flared up in the adjacent areas, tension en-gripped in some areas in Mandirbazar, Kulpi and Diamond Harbour PS also. Muslims jointly appeared in  roads and started slogans against Hindus and BJP/RSS/VHP in a very fanatic way.

While no Muslim still arrested as  reported, four Hindu youths from Kuleswar were arrested in the evening and kept in Diamond Harbour PS as per latest information.

Some injured persons are being treated in Diamond Harbour Sub Divisional Hospital also. 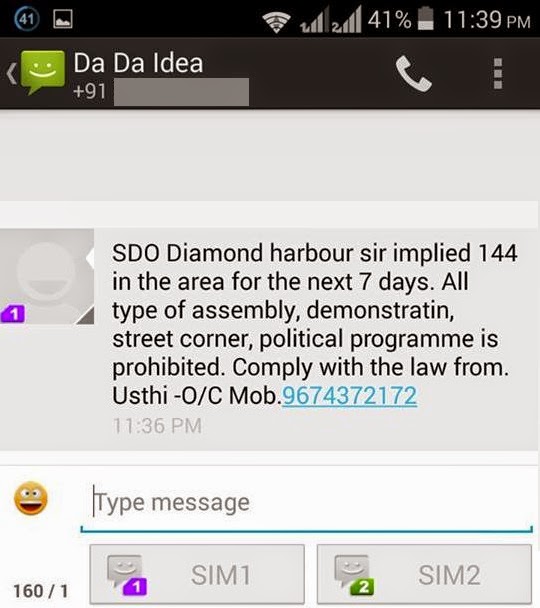 30/01/2015 COMPLETE LAWLESSNESS IN USTHI. WORST THAN NALIAKHALI (CANNING) RIOT.
*** Some hrs back (11 am)
Mr Tathagata Roy and Samik Bhattacharya BJP were compelled to return back from Usthi PS and not allowed to get entry to disturbed area to meet the victim families and looted Hindu business men. They were staged a dharna at Usthi Petrol Pump and forced to leave the place by police under TMC control.
*** At about 12-30 noon
Muslim goons again started attacking Hindus at Panchagram Kayet Para and Kuleswar and torched several Hindu Houses. Miking from Mosques are engaged in fomenting Muslims to unite them and in collection of Money and arms.
*** At about 2-00 pm. Fresh deployment of RAF seen. Police zeep are seen to engage in public announcement for keeping peace, law and order.


*** 3.50 pm: A Police Van entered the Court Campus. Seen a large commotion in Court Premises. Public guessed that Usthi Muslim Perpetrators are in the Van.

*** 7.00 pm. SOS. URGENT AND ALL CONCERNED.
A High source tells that today the anti-socials of Usthi, Deula, Magrahat will attack Hindus of Nainan, Chousa, Satghara, Deyarak in dark of Night to teach a final lesson to Hindus. Usthi PS (09674372172 / 03174-250203), SDPO DH (03174-255221), SDO ( 03174-255222) SP S24 Pgs (033 - 2479-3333), DIB Control (033-2448-0118) are requested to save the life of law abiding people of Usthi and adjacent areas and restrain the law braekers. Plz Plz. Don't ignore this message and save many lives.
Indications: 1. After Friday Namaz there were spl meetings of notorious anti-socials in many places reported.
2. Muslims are sending their women and children away to vacate their homes. a) They will accommodate outsiders there. b) They will set fire in the vacate houses to blame Hindus.
3. Police is under pressure and started their dialogue in a very mysterious way. A very unpredictable situation before a great disaster.

*** 6.00 am. An unprecedented security arrangements and heavy deployment of RAF and Armed Police saved the situation in Usthi last night. The area was flooded with halogen lights. A resolute WB Police took all arrangements to foil the conspiracy of perpetrators. Villagers of Usthi, Nainan, Satghara, Kuleswar, Deyarak spent an incident free, peaceful night blessed by the Police and Administrations. Great Thanks.

*** 5.00 pm.  A meeting of Usthi BDO with the victimized Hindu businessmen was held in Usthi Panchayet Samiti in the presence of Sabhapati of Panchayet Samiti, O/C Usthi PS toady. It is heard that a decision was taken to the effect that all large business holders will get interest free loan of  Rs 5 lakh, when the medium and small scale victim businessmen will get Rs. 2 lakh and 1 lakh each respectively. The meeting touched the heat as the main culprit of Usthi Riot and Mayhem, Giyasuddin Molla is speared in this case and his name is not included in any connected case in the vandalism, looting, arson in Usthi Bazar on 29/01/2015.

*** 5.00 am.  Today the above named accused of all the three cases above were produced before the designated ACJM  in Diamond Harbour Criminal Court. The Hon'ble Court ended the term of Police Custody for the accused and sent all the arrested persons in Jail custody for 14 days until 17/02/2014.

*** 6,00 pm. An Effective Deputation on Usthi Violence and Disturbances was made to the SP South 24 Pgs with proper rehabilitation to the victim Hindu businessmen of Usthi (upto 15 lakh rupees) and immediate arrest of State Minority Affairs Minister Giyasuddin Molla, who is behind the attacks on Hindus and mayhem in Usthi.
Posted by Bengal Spotlight at 9:08 AM