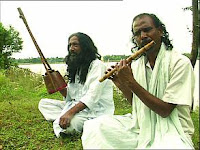 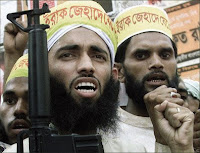 Music fatwa at home or out

Jangipur : A maulana in Murshidabad has banned listening to music at home or in concerts and playing songs in public.
The “fatwa”, written in bold on walls on both sides of the approach road to Kanpur village in Raghunathgunj, bears the stamp of the local club and the Mazaar and Madarsa Committee.
“Music is prohibited in this village,’’ reads one.
From the tea stall owner to residents, everybody has been served with the notice, asking them not to play music or watch a dance performance on stage or on television.
Members of the Kanpur Nabajagaran Club are even visiting households to keep a check. The penalty for defying the order: Rs 1,000.
Lutful Sheikh, the secretary of the club, about 280 km from Calcutta, said Rajjak Sheikh, who deals in children’s toys at the local market, was fined for playing a CD in his shop.
A religious leader from Uttar Pradesh first imposed the ban. “Sayed Ahmed Kalimi from Katra Sharif in Shahjahanpur visits us every year being the peer sahib of our village and the head of the local madarsa. He imposed the ban in May,” the club secretary said.
Mohammad Safiullah, the head maulana of the village madarsa, said: “Shariyat does not permit Muslims to enjoy music.”
“I declared the fatwa after consulting the senior people of this village. In the past seven months no one has dared to challenge my directive but for one businessman,” Safiullah said.
Hyder Ali, a member of the Kanpur village panchayat, said: “The villagers have supported the fatwa as it has helped develop the moral character of the present generation. Present trends of music and other forms of entertainment affect the upbringing of a child.”
However, Sukhchand Sheikh, who owns a tea stall, said his business has suffered because of it. “I had a TV set in my stall and everybody enjoyed music and other programmes. Now that it is switched off, the number of customers has declined.”
The inspector in charge of the Raghunathgunj police station, Subhendu Banerjee, was, however, “not aware of any such fatwa”.
The matter came to light on December last, but the villegers are still in threat of the Bengal Talibans inroaded the core of Bengal life where the muslims are majority in West Bengal. The muslims also love music. They have rich legacy of Bengali folk songs. The Bhatiali, Jari, Fakiri tradititions are the inspeparable part of Bengali folk songs. Lalan Fakir,Quazi Nazrul and other Muslim folk singers are highly estimated for their Islami songs, as well their Shyama Sangeet and other sensetions. In rural and urban areas the muslim women sing in their own tradition. But all these are under the threat of this Talibani Music Fatwa.
Posted by Bengal Spotlight at 1:55 AM