We Need a Promod Mutalik to save Hindus in West Bengal 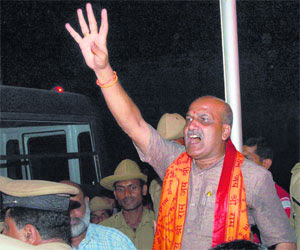 [ An open letter to Shri M.K. Dhar for his recent articles]

The Ramsenee Chief Promod Mutalik is now restricted by the Court for entering into Mangalore district. Everybody fears Babu Bajrangi and Mutalik. Sri Maloy krishna Dhar (http://www.maloykrishnadhar.com/) also. These notorious persons (as portrayed by Shri Dhar) do their heinous activities by spreading a fear psychosis amongst the muslim and christian minorities in India. Sri Dhar is a Resource Person as I consider like many others. So he does know better the fear psychosis of minority hindus in many places in India and specially in West Bengal. In Malda, Murshibad, Rajabazar , Khidderpur , Magrahat or in interiors of 'muslim bangla' in West Bengal or so many 'Mini Pakistan' everywhere in India from Srinagar to Hyderabad, Azamgarh to Anantnag . Babu Bajrangi or the Promod Mutalik may be by-product of that persecuted reality.

There were 16% hindus in West Pakistan around 1947 . They have pulled down to 1.85% now. (For a details report pl visit http://www.alertpak.wordpress.com/ and search Plight of Hindus in Pakistan). There were 29 % Hindus in East Pakistan in 1947 and 22% Hindus in Bangladesh in 1971. Now only 9% Hindu exists there. WHY? The simple answer is this, that Hindu Dharma is quite reluctant to produce any Babu Bajringi or Promod Mutalik to resist the Muslim fanatics and goons for the protection of Hindu life, Hindu temples , Hindu women, Hindu sentiment and Hindu Dash like Lahore, Khulna, Jess ore etc.

The Pub-attack so far generated in the style of moral policing had a sensational connection with a free mixing of a Hindu girl with a Muslim boy. This is now a trend to seduce Hindu girls by many ways by the valiant Muslim boys within the parameter of our permissive civil society. So, Rizwanoor can do anything with Priyanka Todi.

But Rajat Sarkar in WCD&SW Deptt. in Writers Buildings, an Government employee in West Bengal is to be seriously threatened by the brother of his muslim wife. Or the Sushanta Prasad of Baharampore area is to be murdered by the relatives of his muslim wife, Manera. Or Arka Bandopadhya of Barasat Chowdhury Para is to be burnt seriously for marrying his beloved Rehenna Sultana in recent times. (Pl visits the site http://www.hindusamhati.org/ and Samhati Sangbad, Sept 2008 Issue in that site).

These are the non-issues. And the Riz case is the only issue to be discussed, investigated and so so on the street show.Muslims never allow their girls and women to anybody. We know their activities like honor- killing etc. But we have to allow our girls and women to the Muslims in the name of secularism, women liberation and total surrender to Islam. So there is only way to condemn these Ram Seen and others.

I want to give a statistics to Sri Dhar. In a Hindu majority area ( Hindu 55% , Muslim 45%), in one Sub-divisional Town my three Marriage Register friends mature 40-60 marriage between Hindu bride and Muslim groom in a week under Special Marriage Act, depending the marriage days fall in Muslim calendar .And if Ram Senee or others try to save the situation of statistical imbalance found in the abnormal growth rate in muslim population, Bangladeshi infiltration or womb-drain in hindu society, you may discard the same. But we people support them also. Permissive Womb-drain, uprooting Hindu girls & women from hindu religion is not a proper way Worship of Devine Mother cult or the empowerment of hindu women so far.

In his recent Article "Indian Primates : Buried Below Permafrost Of Sanskriti" , Shri Dhar (http://www.maloykrishnadhar.com/) resented about the reconversion in hinduism from forcefully or allured or situationaly converted Hindus. I may quote only from Swami Vivekananda in this respect.Rules and Regulations of the Ramakrishna Math Belur, Framed by SWAMIJI in 1897-98 pages 19-29 " Plan of Work for India -- 1. When the Muslims first came to India, there were, according to their historical records, sixty crores Hindus in India. This calculation suffers rather from under estimation than exaggeration; for lots of people perished solely through the persecution of the Muslims. Therefore it is obvious that the number of the Hindus was even more than sixty crores- on no account less than that. But today the same Hindus have dwindled into twenty crores. Over and above that, about two crores of people have become Christians and more than a lakh of people are becoming Christians every year. It is special for preservation of the Hindu race and religion Bhagavan Ramakrishna, the embodiment of mercy, has incarnated himself."

Respected Swami Laxmanananda Swaraswati in Kandhamal , Orrissa actually realised the message of Swami Vivekananda and His Holiness swamiji started to reconvert the converted hindu tribes again in Hinduism. The Traders of Poverty in India@ Christian Missionaries took the matter as a challenge to Christianity in India and they culpably murdered the Revered Swami with the help of Anti India - Anti Tradition Maoists, very active in India to destabilised this country with the help of Chaina.

Swami Laxmana was might be inspired by the specific directive of Swami Vivekananda ..." 20. Great effort should be made to bring even Muslims and Christians into the hindu fold..." ibidem, page 26).But we only hurl upon the situation without the pretext. Actually this can happen only we the Hindu People Intelligentsia are being alienated from our Hindu Roots, both physically and mentally. This is not good as Vivekanada maintains that... " For whoever goes out of the Hindu religion, is not only lost to us, but we have in one more enemy..." (ibidem, page 24).

On the other hand we do not want loose Babu Bajrangi or Promodji from Hindu fold nor we see them as an enemy of Hindus anyway.We intelligentsia people write books, spread websites, make blogs, give lectures and so on. But we never protect the hindu girls- women from molestation, rape or trafficking by the muslim goons. Nor we be able to protect the temples vandalized by the Muslim Fundamentalists. Hindu property, land , prestige, everything. But sometimes these Promod Mutaliks, Pragya Sing Thakurs and Sameer Achanaks and Bhalluks try to save Hindus from their ruin caused by Islamic Persecutors and inactive police, paramilitary and administration. Situation heightened these Promod Mutaliks.
People shout - LONG LIVE MUTALIK .