Destiny of West Bengal Hindus: The Coming Days of Slavery to Islam 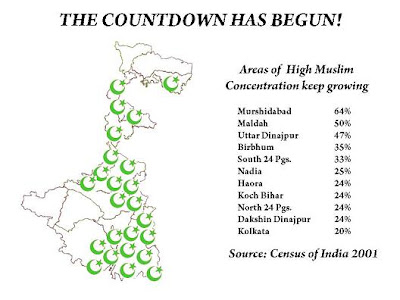 Creation of a Muslim Bangla in near future


How fast-breeding Muslims are turning West Bengal (and entire India for that matter) into a Muslim-majority state and signs of the consequences that await its Hindu populations.

The State of West Bengal: West Bengal is a state in eastern India, having Islamic Bangladesh on its eastern border. Geographically West Bengal is on the eastern bottleneck of India, stretching from the Himalayas in the north to the Bay of Bengal in the south. It has a total area of 88,752 square kilometres (34,267 sq mi).

The West Bengal region was part of a number of empires and kingdoms during the past two millennia. The British East India Company consolidated their hold on the region following the Battle of Plassey in 1757, and the city of Calcutta, now Kolkata, served, up to 1911, as the capital of British India. This region was a hotbed of the Indian independence movement through the early 20th century. In 1947, Bengal was divided along religious lines into two separate entities: West Bengal, a state of India, and East Bengal, a part of the new nation of Pakistan (which later became independent Bangladesh in 1971).

West Bengal, the most densely-populated state in India, occupies only 2.7% of the India's land area, but supports over 7.8% of its population. The Figure 1 shows the political map of West Bengal and its 19 districts.

West Bengal suffered from large refugee influx during the partition in 1947, leading to political unrests later on. The partition of Bengal entailed the greatest exodus of people in Human History. Some 3.5 million Hindus migrated from East Pakistan to India, while only 500,000 Muslims crossed border from West Bengal to East Pakistan, although it was Muslims, who demanded a separate Muslim state and created Pakistan. The influx of Hindu refugees created crisis of land and food in West Bengal lasting more than three decades. The politics of West Bengal, since the partition in 1947, has developed round the nucleus of refugee problem. Both the Rightists and the Leftists in politics of West Bengal have not yet become free from the socio-economic conditions created by the partition of Bengal.

Again, the Bangladesh Liberation War of 1971 resulted in the fresh influx of millions of Hindu refugees to West Bengal, causing significant strain on its infrastructure. West Bengal politics underwent a major change when the Left Front won the 1977 assembly election, defeating the incumbent Indian National Congress. The Left Front, led by Communist Party of India (Marxist), has governed the state for the subsequent three decades. It may be mentioned here that in 1905, an abortive attempt was made by the British Government to divide the province of Bengal into two zones, but the plan was withdrawn in 1911 due to violent opposition by the people of both East and West Bengal.

As a matter of fact, Shyama Prasad Mookherjee was the creator of the state now called West Bengal. He carved out West Bengal from the then East Pakistan and East Punjab from West Pakistan. He was basically an educationist but the crisis of partition, more pointedly the partition of Bengal, brought him into politics. When the British accepted partition of India and creation of the new Islamic state of Pakistan, it was decided that the state or a Pradesh would be considered the smallest unit. Or in other words, a state with majority Muslim would go to Pakistan and a Hindu majority state would remain in the Indian Republic.

At that time the Bengal Province was a Muslim majority state and hence the entire Bengal was waiting to be included into the Islamic state of Pakistan. But after the massacre of the Hindus by the Muslims in Calcutta and Noakhali in 1946-47, Dr Mookherjee was convinced that it would be devastating for the Hindus, if they continue to live in a Muslim-dominated state and under a government controlled by the Muslim League. It should be mentioned here that most of the districts of East Bengal were Muslim dominated while the districts of western Bengal were dominated by the Hindus. So, Dr Mookherjee demanded that the smallest unit should be a district, not a province.

So far the first reason is concerned, it is necessary for the government to impose strict family planning measures upon Muslims. But no government has so far tried to take such a step over fears of earning their displeasure, thus, loosing their votes. Similarly, no government has ever taken any step towards halting the influx of illegal Bangladeshi immigrants. On the contrary, every political party, hoping to swell their vote-bank, is inviting Bangladeshi immigrants and assisting them to obtain Indian citizenship.

Notably, illegal Bangladeshi intruders are not affecting West Bengal alone, but are also fast altering the demography of the neighbouring states of Bihar and Assam. According to estimates of the police and CID departments, nearly 30 million Bangladeshi Muslims have entered West Bengal, Bihar and Assam. As a result, three bordering districts Bihar, namely Kishanganj, Araria and Katihar, and seven districts of Assam, namely Dhubri, Goalpara, Barpeta, Naogaon, Morigaon, Hailakandi and Karimganj, have turned into Muslim-majority districts.

Alarmingly, as the bordering villages of West Bengal, Bihar and Assam become Muslim dominated, they are being utilized as springboards by the jihadi terrorists and ISI agents. Moreover, mosques and madrasas are mushrooming in these districts, and Hindus are being evicted from their ancestral homes under threats and violence. The life and dignity of the Hindus and the honour of their women are no longer safe in those bordering villages. As pointed out above (see Table 1), Hindu population is in decline in all the districts of West Bengal, except Coochbihar, while Figure 2 illustrates the pace of this decline between 1951 and 2001. In 1991, Hindus constituted 75% of West Bengal population, which will come down to 70% in 2011. In 2034, the Hindu population will decline to 60%, and in 2051, it will dwindle to about 52%. In other words, entire West Bengal will become a Muslim-majority state in the next 40 years.

It is needless to say that, as soon as the Muslim population would rise to 40% in 2034, it would be difficult for the Hindus to live in peace in the state. Secret IB report tells that Muslims will claim the land on the eastern side of River Hooghly as an Islamic state or a part of greater Bangladesh. In such a situation, there will remain two options before the Hindus: either to accept Islam or to become refugee again and flee their homes to other parts of India to save their lives, dignity and religious faith.

After the partition of Bengal in 1947, Hindus from East Pakistan—fleeing Muslim persecutions, including violence, rapes and forced conversion—came to West Bengal as paupers to save their lives and faith, and honor of their women. But next time, when the West Bengal is Islamized, they would have no place to go. It would be devastating for the Hindus of West Bengal. They would have either to embrace Islam, live as degraded dhimmis or drown themselves in the waters of Bay of Bengal.

As mentioned earlier, in the districts of West Bengal, bordering Islamic Bangladesh, where Muslims have already gained majority due influx of Bangladeshi Muslims, have been turned into mini-Pakistans, where jihad against the Hindus have already begun. It is becoming, day by day, difficult for the Hindus to live peacefully in those areas. Their life and property is becoming unsafe. Forceful eviction of the Hindus, looting their properties, raping and molestation of their women folk are becoming a daily occurrences.

Such incidents are not confined to the border districts alone, but also in isolated pockets of other districts, where Muslims may have gained majority. In the districts of North and South 24 Parganas, there are many such pockets where the Muslims have unleashed their jihadi activities against the Hindus.

Posted by Bengal Spotlight at 10:57 AM

this is because of bengalies dump mind. they know for vote bank cpm and tmc doing all nasty in favour of muslims. then why these unlogical bengalies support to bjp and shiv sena like pirty. once bjp come in mejority in wb the muslim problems also decrese and bangladesis also pressurize for leave wb.

In order to achieve the Replacement Rate for a nation or community or society the Total Fertility Rate (TFR) need to be 2.1 children per women. At the Replacement Rate the number of births in a given period is equal to number of deaths ensuring a stable population which is neither growing nor falling. The TFR for West Bengal is only 1.7 and far lower than the Replacement rate of 2.1. For Bengali Hindus it is even lower.