Kolkata is the safest corridor to use : Confession of arrested Muslim Ultra 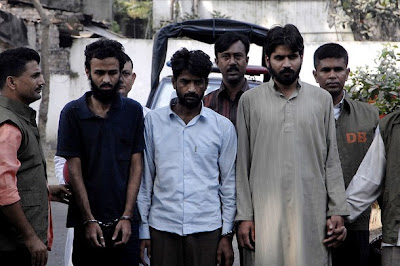 "Kolkata is the safest corridor to use" - Confession of arrested Muslim Ultra T Nasir of Indian Mujaheedin.

How it should be described ? A great fuss about nothing. Or, the more laws, the more flaws. The 1528 Km long border areas with Bangladesh or the three muslim majority districts incuding Malda & Murshidabad or the Bangladesh itself are not considered as the heaven of the Bangladesh ultras crossing the border now. The Kolkata, capital city of West Bengal is being considered as the Heaven and "most safe corridor" for the trans-border Muslim ultras- as confessed by Indian Mujaheedin top member T Nasir alias Omar Gazi through a rigorous interrogation in police custody after Nasir was arrested on 20th November last in Dacca. Nasir @ Omar Gazi is the prime accused in Bangalore blast case in last year. The interrogation reveals that Nasir visited Kolkata four times from Sept '09 to Nov '09 for networking activities very easily. Preferably he used the Howrha Rly Station and Kolkata route to travel between Dacca and Kolkata. Not only that he took shelter in the heartland of Kolkata city hoodwinking the Kolkata Police (KP) and its Special Branch (SB). But the Special Task Force (STF) could not trace or arrest this wanted ultra any way.

Some days ago three HUJI ultras from Bangladesh were captured by KP from Babughat Bus terminus with fake notes of 30 Lakh Indian Rupee while they were trying to depart for Malda. From the statements of these three HUJI actvists viz. Abdullah Banki, Abdur Rahaman and Mohammed Tahidur, the SB officers came to know that their group leader Mohammed Jayed visited Kolkata for setting a action plan for terrorist activities including recruitment for HUJI action squad and strengthening the financial sector through selling of fake notes and collecting donations from various sympathizers of Islamic Jehad in West Bengal. Police recovered various documents and maps demarcating important Govt offices, other institutions and the safe passages at Petrapole border areas through Howraha and Sealdah Rly stations. Actually these Islamic ultras from Bangladesh now consider Kolkata as a very safe zone for spreading their Jehadi activities in West Bengal through Kolkata.

Approving Kolkata as a safe corridor for the Islamic terrorists from Bangladesh, an Additional Commisioner of Special Branch indicated the case of Mohammed Samir as an best example in this regard. Taking a Hindu common name of Samir, he rented a house at M M Barman Street under Jorasnanko Police Station area for two years like that. Outwardly Samir used to ran a fruit shop in the street side almost as a hawker. Frequently Samir used left his house to venture some unknown places for Jehadi networking, telling a story of home-coming. All on a sudden Samir was arrested by BSF from border areas when crossing the border illegally. It was surfaced then that Samir was a designated operator of HUJI sleeper cell in kolkata.

In 1993, Mumbai STF arrested some Majid Khan from Raja Bazar area in connection with Mumbai serial blasts in Rly Stations. Majid rented a house in Raja Bazar and proved himself as a very low profile, soft spoken and simple person in the locality. His arrest astonished his house owner and the neighbors as well. But this Majid transported 20 Kg RDX for Mumbai Blast from Kolkata to Mumbai through Howrah Station.

Most of the Islamic ultras are changing their route or refuge from the border areas rather to penetrate into the slums in Metropolies or the urban towns. But Kolkata is always their best choice as some Islamic Fundamental leaders in Bengal has prepared this soil as an home & hearth for the Muslim fundamentalists from every where. This leaders have immense socio-economic power to influence the political sector and police & administrative sectors in West Bengal.

But why they prefer the change in route and safe corridor in border ? Why these ultras prefer Kokata as a transit point acording to their best choice ? A top brass in the STF opined that Kolkata is the most easy accessible for both the Rly, road and water ways for every directions from here. The most congested Howrah and Sealdah stations with millions of commuters everyday, are used an easy hide out and mixing point for the ultras wait in transition. It is impossible to net any one in disguise from here without a specific information. Ultras generally take this advantages. More over for the current pressure upon the ultras there in Bangladesh, the BDR (Bangladesh Rifles) and the pressure of BSF (Border Security Force) in this side, the Bangladesi miscreants feel risks in the border rather than the core areas wide open for them.

In the recent political changes in bangladesh, the Islamist militant

activities have “collapsed” to some extent following a series of arrests of suspected free militants (having network in both in India and bangladesh), a police official in Dacca has claimed.

He said Emdadullah is a suspected member of Harkatul Jihadia Islamia Azadia, a Pakistan-based militant group. He is also the Bangladesh chief of Asif Reza Commando force (Established in Kolkata in 1993) and member of the LeT, the official said. In such a condition the militants based in Bangladesh now seeks a refuge in a safe place of terrorists called "Kolkata Militia Oasis" within their supporters in the intellectuals, media persons, N G Os, statesmen, political leaders, Muslim businessmen and obviously their patrons (Molla-Mulavis) in some mosques in Kolkata, Howrah & Hoogly.

In this context the arrest of 16 millitants only ( 10 for fake currency networking and 6 for other terrorist and criminal activities) from WB is undoubtedly a poor performance by the Kolkata STF,when 300 militants were arrested in India by various branches of police task force in 2009. The penetration of ISI, DGFI and the individual Islamic Groups in every sectors in Kolkata made this place a safest place for the Islamic militants forever.