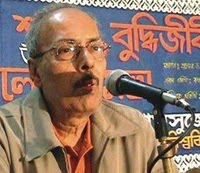 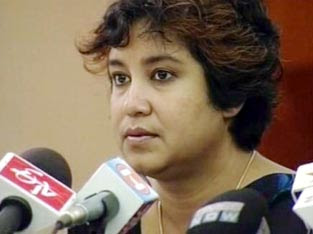 'I have come to motherland to pay tribute to intellectuals' : Shirshendu Mukhopadhyay.

But Bengal Intellectuals don't protest the persecution against Taslima Nasreen or the attack upon The Statesman.

Very recently Shirshendu Mukhopadhyay went to Bangladesh to attend "Martyred Intellectuals Day Celebration" on 16 December at Rajshahi. Mukhopadhyay, eminent Bengali author of the Subcontinent said in that event : any important event in 'epar Bangla' (Bangladesh) always has a big effect on in 'opar Bangla' (West Bengal) and so, Martyred Intellectuals Day is also a mourning day for the people of West Bengal.

He was speaking as chief guest at a discussion on Martyred Intellectuals Day at Shaheed Shamsuzzoha Hall of Rajshahi University. Shirshendu said, the tyrants and autocrats always fear pro-people, freedom-loving intellectuals. For this reason, the intellectuals were killed in Bangladesh by Pakistani occupation forces during the liberation war in 1971. The day is equally mournful for the people of West Bengal, he added.

“I am not on a pleasure trip here. I have come to my motherland only to pay tribute to the martyred intellectuals. I always do so when anything important happens here." Shirshendu Mukhopadhyay was born at Bainkhara village in Bikrampur, Bangladesh.

Alike Shirsendu many a Bengali Intellectuals from West Bengal try to make their impressions as a staunch activists in the line of Human Rights, Rights of Writers and Free Intellectuals and obviously for the persecution untold for the common people, while visiting Bangladesh. But in reality, these pretenders do all their best to surrender as a pygmy to the Islamic Monster with ravenous fundamentalism in the West Bengal scenario.

These type of West Bengal Intellectuals, Writers, Poets, Critics, Journalists, Human Rightists just made a formalities in favour of Taslima when ousted from Kolkata out of nefarious Islamic design on 21.09.2007. But they are totally failure to make a honorable return of Taslima in Kolkata. Actually Shirshendu and his friends fear to speak on Islamofascism in West Bengal. They are in a surrendering posture.

These people of tall talks kept total silence upon the attack on Statesman House in the early months of 2009 by the fanatic Muslims for republishing the article of J. Hari,"Why should I respect these oppressive religions?" on 05/02/09.

These people of Ultra Secularism make a sea of tears for Rizwanur Rahaman but throws sand to the eyes of widow of Sushanto Prasad (Slained at Berhampore), Arko Bandopadhaya (torched alive at Barasat) or Rajat Ray (persecuted at Kalyani) and many others who married Muslim girls being a Hindu. But nobody expresses any sympathy towards these persecuted Hindus.

These double faced Intellectuals are paving the invasion of Muslim Rulers again in Bengal. They never see or hear anything about the persecution and plight of common Hindu People by the Politicized Muslim Persecutors all over Bengal in large scale. And for this attribute only they are 'dignified' as the 'Real Intellectuals' and 'patronized' by 'Petro-Dollars' !!
Posted by Sambuddha Gupta.

Posted by Bengal Spotlight at 8:20 PM

Having personal knowledge of several acts of minority persecution in Bangladesh, I would not outright condemn everyone. I find that several Bangla media persons and intellectuals are voicing condemnations against such actions against the minoritieses. In many cases police are taking cognizance and pursuing cases. I think we should be patient and give opportunity to the new government to handle the matter lawfully.

As far as W. Bengal is concerned my comment is irrelevant. I live in Delhi, where also slightest dig made against Islam generate heat. A lot depends of local Muslim leaders to teach the common Muslims that logical criticism of any religion does not mean disrespect and disregard. In Bengal, as I witness, Hindu Muslim divide is widening. I have witnessed the same trend almost all over India. We are living together separately as strangers. This is giving fillip to Muslim separatism and Hindu concern about unity. Those may like to read more may visit my website www.maloykrishnadhar.com


Sirshendubabu's contribution is immeasurable. We should stand by AL Govt and Bangladeshi intellectuals. We have stood by Taslima. I may add that Bengalis in Delhi have been more proactive than those in
Kolkata. K.

Sent from my mobile device to FHRS_USA@yahoogroups.com