A Tale of Two Cities. 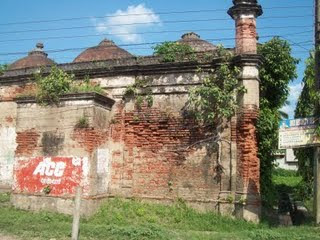 Mosque to be Revived after 63 Years to enhance anti-Hindu activities in Barrackpore, West Bengal........ Scenario 1. 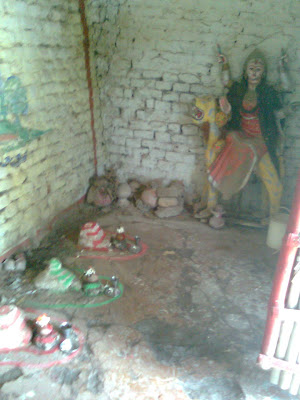 Land of 80 Years old Shiva Temple has been grabbed by fanatic Muslims and Temple de-sanctified by anti-Hindus, in Mograhat, West Bengal............Scenario 2.
An absolutely dilapidated mosque, named Bhanga Masjid, is situated in Ward no. 3 of Barrackpore town in North 24 Pargana district. It is just on the side of the main railway track of Sealdah – Krishnanagar line. In last 63 years, i.e., after independence, nobody offered Namaz in that mosque as there is no Muslim locality nearby. Before independence, some Muslims used to live here who migrated to Pakistan after partition.

In this Bhanga Masjid, a government primary school (Nabarun Vidyamandir) used to run since long time. In fact, all the aged persons of this area were taught in this school in their childhood. About 2 years back, that school became closed due to lack of students.

Adjacent to that dilapidated structure, a club named ‘Sankha Bharati’ is situated. It was established in 1951. It is a registered club with various activities of sports and culture. Within 1 kilometer radius of that spot, there is no Muslim locality/residence.

In the month of April this year, on one Friday before the Parliamentary Election, some Muslim activists came from distant places and tried to offer Namaz in that dilapidated structure. Local people sensing the mal-intents of these outsiders drove them away. Next Friday, Tarit Baran Topdar, the then local M.P. of CPI(M), came there with a few outsider members of a right-wing Muslim lobby group and his party cadres. Local people gathered there, Club members were there and police force from Barrackpur Police Station were also present. Topdar shouted in front of all, “ I am taking the charge of this Mosque. Muslims will offer Namaz here every Friday henceforth. I Challenge anyone and everyone to stop it.” Then he entered the structures leaving his shoes outside along with the Muslims. The police were mere spectators and the local people remained dumb-founded. Read details here... 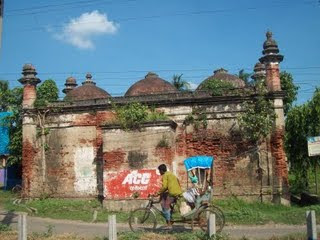 On Thursday 22nd October, 2009, members of a Muslim reactionary group came and fixed some cement made grills (Zaffri) in the dilapidated structure. In night, some unidentified persons broke those grills. Next day on Friday at about 11 am when the outsiders Muslims started to come, they saw the broken grills. They became agitated and went to Police station to complain. Police came. In its protection Friday Namaz was offered. Then again construction started by the Muslims in a big way under Police protection. On 24th October 2009,the construction work continued.
In the evening, a small scuffle occurred when one member of the club threw a cigarette end outside the club room. Consequently, the I.C. of Police Station came and asked the Muslims to complete the work within tonight and vacate the place. Police posting is there.

About one month ago, the Club contacted Hindu Samhati (HS), a Hindu Activist Forum in Bengal and sought help. Since then the local HS workers are fully active and taking initiative. The Club members are in close contact with the HS Central Committee. They acquired some courage, became a little hopeful and trying their best.

Jackie, a rich young Muslim is leading the operation of capturing the venue. He lives in Dhobighat area of the town, owns a private school, and reportedly a SIMI member. Earlier he used to be a ‘chamcha’, or yesman of Tarit Topdar, now became a chamcha of Dinesh Trivedi, newly elected Trinamool Congress M.P. of Barrackpore.

Two open public meetings were addressed by Tapan Ghosh, President, Hindu Samhati : on 28th October, 2009- in front of Bhanga Masjid and on 22nd November 2009 at Lalkuthi near 15 no. Rail Gate. A leaflet was distributed in the first meeting condemning Tarit Topdar.
For distributing the leaflet delineating Communist appeasement of Muslims in this Mosque revival in Barrackpore and holding meetings (on public demand) against unreasonable rehabilitation of outsider Muslims in a very Hindu belt, some sections have been charged against Hindu Samhati President in a police case started in the local police station.

After losing its home and hearth in the recent polls, Communists in Bengal are trying hard to stalemate the Trinamool strategey of Muslim appeasement. Both of them are playing with fires of Islamic fundamentalism. 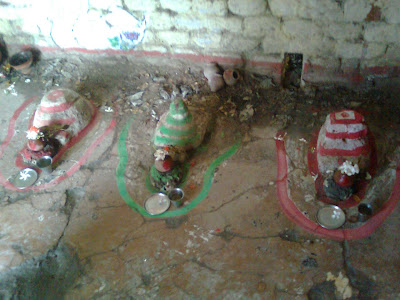 An absolutely dilapidated temple, named Shiva Mandir, is situated in the village named Dihi Kalash of Mograhat - I Block in South Pargans has been desecrated at least thrice including uprooting and throwing the Shiva Linga (Black stone Shiva Symbol). The nearby Muslim residents have been occupied the Devottar Sampatti ( Land permanently given to the service of God) through the sidelines of some 23 Satak (Decimal) land of the temple of Shiva.
Though the land bearing JL No. 112, Khatian No. 965, Touji No. 155 is clearly recorded in the Government survey and demarcated as Temple Land, the majority Muslims forcefully grabbed the portion of the Hindu Land as a mark of Muslim Supremacy spearheading in rural Bengal now a days.
The scheduled caste Hindus in that village of Dihi Kalash a bare minority and get no help from any so called Big Hindu Organisations and even any support of caste Hindus of the adjacent areas. In Mograhat Block Hindus are minority (In 1981 Hindus in Mograhat were 87% and 2001 it came down to 45% under an unbelievable strategic operation) and they do not dare to protest even, as all political parties do not here the Hindus for such case of violation of religious rights.

The sevayet ( trustee or manager) of the Shiva Temple, Madhusudan Nasker told the Bengal Spotlight that the situation of Hindus concerning the protection of the Temple is unbearable and nobody gives us justice. There is a case for the illegal occupation of temple land by Abdul Gazi Gani being M/C No. 12/96 in Diamond Harbour Civil Court but the proceedings are being hampered for the non-appearance of the land grabbers. It is believed that one of the illegal occupier of the temple land, Md Hanna Gazi has such a rapport in the system that all the papers frequently disappear from the court itself. 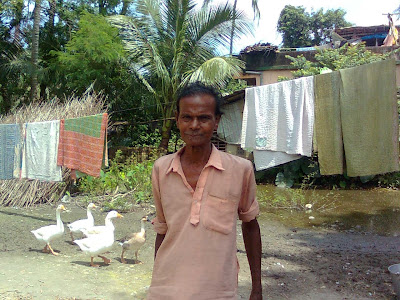 Madhusudan Babu reported the matter everywhere in Police and Administration including Human Rights Commission, but it yields no result so far. With a very ardent zeal and devotion Mr Nasker and his wife are striving for restore the dignity of this 80 years old Shiva temple where their forefathers worshiped there earlier.

Mr. Tarit Topdar,M.P. & Muslim Messiah of Barrackpore or the Local MP for Magrahat AC never cared for such indignity of minority Hindus in West Bengal. They can only re-settle the Muslims in Hindu areas. There are such thousands of rural temples and Hindu lands of temples have already been grabbed by the religious Muslims in every Muslim majority blocks and districts in West Bengal.

Ms Mamata Banerjee already declared the holy Islamic possession everywhere to make West Bengal as Pak Bangla Stan. What will be your Role Mr. Topder ?
Posted by Bengal Spotlight at 10:48 AM

It is a painful situation. Why the Hindu leaders, irrespective of party affiliation do not come under one umbrella and maintain status quo? Such blatant Hindu Muslim division rekindles the memories of pre-partion polarization. Politics had mired the unity of the country and CPM and TMC politics is dividing the society again. If vote alone is the major factor we should consider if electoral democracy is good for the Hidnon-Muslims in Bharat! Vote boycott en masse is perhaps an answer.