South 24 Pgs is now dominated by the Muslim collaborators. District administration and Police are put under  gross pressure of the Local Talibans.
~ Sambuddha Gupta. 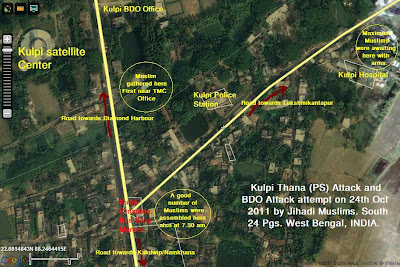 It is nothing more than "Cops and wives assaulted" in the secular media like The Telegraph as reported in their 25th Oct. edition as this:

"["Kulpi, Oct. 24: Around 1,000 villagers allegedly led by Trinamul Congress activists ransacked a police station in South 24-Parganas this morning and assaulted the personnel and their wives after the arrest of three party supporters.

At least six personnel of Kulpi police station suffered injuries in the attack.

Local CPM leaders alleged that Trinamul activists attacked the police station to protest the arrests of three party supporters who had “robbed the house of a Left leader” in Gomukh village on Saturday.

“The trio took away jewellery and Rs 1 lakh in cash from Lalmohan Sardar’s house. Sardar has good organisational skills and Trinamul has been creating all sorts of problems for him. The robbery is part of a conspiracy hatched by Trinamul,” said Shakuntala Paik, a CPM district committee member.

Trinamul denied the charge and said “anti-socials” had attacked the police station. Local party MLA Jogaranjan Haldar said: “The CPM is blaming us because it has lost ground in the area. Our men were not involved in the attack.”

Sources said tension had been brewing in Gomukh, which is part of the Kulpi Assembly constituency, since Trinamul snatched the seat from the CPM in the polls this year.

At 9am, around 1,000 villagers armed with bamboo sticks and bricks descended on the police station. “One group of attackers damaged a dozen police vehicles and seven motorcycles. Several others entered the police station and ransacked it. They broke furniture and windowpanes and tore files,” an officer said.

“The attackers barged into the staff quarters behind the police station and assaulted some of the women,” the officer added.

The wife of another officer said: “Some of the attackers pulled us by our hands. We ran to the roof and locked the door to the terrace,” she said.

Some of the attackers blocked the Diamond Harbour Road nearby. The rampage continued for an hour before reinforcements came.

When there is lack of resistance, demonism reigns supreme and what has Kulpi, Diamond Harbour, District -24 Parganas (South) witnessed on October 24, 2011 is the ugliest expression of Islamic fundamentalism known in its environs hitherto. Taking cue from an untoward incident having involvement of an armed gang of Islamic felons daring to invade the Hindu village of Jeliabati, P.S. Kulpi, Dist. 24 Paraganas (South) on October 23, 2011 at dead night to harm Hindu households, its womenfolk in particular, resulting into seizure of three of them red-handed and death of two Muslim criminals and sinking condition of the third one (at the moment in the government hospital nearby) following a public outrage, no less than 30, 000 Muslims, if not more, ran amok in the area of Kulpi, ransacking local BDO (Block Development Office) and Kulpi police station from the early morning today.

As fresh reports are coming in, both government offices have been pillaged and also burnt to a large extent. Hindu shops in the affected area have not been able to escape the fate too; arson or incendiarism has affected them also largely. As stated by scared police personnel in the ill-fated area, no stone was left unturned to harass the entire police force stationed in the area and telephone connections were also severed to make this onrush perfect. It is worthwhile to mention, NH (National Highway) 117 was also blocked for hours (during operation) by the Muslim crooks flaunting deadly weapons.

What has led to this onslaught all of a sudden? This question appears to any sane individual (naturally) at the outset. For everyone’s knowledge, it must be stated, that the aforesaid villages along with other Hindu-dominated villages of Uttar Narayanpur and Gomukhberia, P.S. Kulpi (as well), have been remaining prime targets of Islamic fundamentalist approaches for months. Above all, it is becoming difficult for Hindu women, of any age, in these areas, turning into subjects of Islamic lewdness more and more, to live here with dignity. Only a few days back, a similar incident broke out in Gomukhberia, leading to a strong outcry among Hindus in the environs. It is being assumed the attack on October 23, 2011 at dead night was premeditated, to avenge the earlier defeat.

Route march of RAF is in full swing at the moment to rein in any disturbance and restore normalcy.

The entire area is panic-stricken."]"

It was not a mere a political tension or rift that caused such a violent action against Kulpi PS (Telegraph), nor the two Muslim criminals died and 30000 Muslims attacked the Kulpi PS (Hindu Samhati).

But it rests with the truth that the Muslim operators have been grossly switched over from the CPIM to the present TMC and trying to run a parallel administration under the dictum of local Muslim leaders disobeying even the political affiliation of TMC or the Govt administration.

It is true that the House owner Lalmohan Sardar is a renowned political leader of CPIM with a Hindu identity in the area and the three captured Muslim dacoits came to rob into Sarders' house have close relations with the local TMC leaders.

As a matter of fact the area of Gumukhberia has a little bit resistance to deter the Islamic hooliganism seldom comes from Ramnagar-Gazipur area upon the Hindu locals time and again. In the almost all cases  in past months Hindus of this area vehemently resisted the Islamic attacks inspired and supported by the TMC. And sometimes the Hindus clustered to fight against the Muslims with a red banner.

If it is not a communal thing or a planned move to run a riot, then what is this? Obviously Paschimbanga is going to an Islamic hell run by the fanatic Talibans. CPIM helped them before and TMC is now helping them accordingly.

Posted by Bengal Spotlight at 5:01 PM