Are Bangladeshi Hindus still Enemies to the States ? What are you thinking about my Refugee Bangal Brothers in West Bengal ??

In Bangladesh Hindus are still Enemies to the State ??

Dhaka: The Bangladesh cabinet on Monday approved a proposed law to return Hindu property which were confiscated during the 1965 Indo-Pak war, when the country was eastern wing of Pakistan, ending a major violation of the rights of minorities in the country.

The proposed law is meant to redress the long-disputed law of the Pakistani era, which was widely criticised as a major violation of the minority rights. During the Pakistan period, the law was called as Enemy Property Act.

The then Pakistani regime enacted the law to confiscate the property of the Hindu families who fled the country when the India-Pakistan war broke out in 1965 while the post independent Bangladesh government renamed it as the Vested Property Act 1974.

The final cabinet approval for the law came after some amendments were made to it in line with the cabinet directives two months ago.

Officials familiar with the

process said under the amended proposal, the government would publish lists of “returnable and non-returnable vested property” within a certain period of times while theclaimants could also seek review about "non returnable" property.

Under the law, government committees at district and upazila or sub-district levels would settle disputes regarding the disputed property.

Awami League had enacted the law to return the minority property at the fag end of its previous 1996-2001 tenure setting a two-year implementation deadline but the subsequent Bangladesh Nationalist Party (BNP) sat on it exposing it to a natural death. The past military-backed interim government, however, enacted anotherordinance under emergency rules with identical objectives of settling the long-standing issue but it too faced a natural death as the incumbent Awami League decided not to ratify it in parliament.

A parliamentary watchdog on March 11 this year asked the land ministry to draft the new Vested Property Return Act restoring the six-month deadline for local authorities to compile a list of land seized under the law.

Many Hindus were unable to recover landholdings lost because of discrimination under the now-defunct Vested Property Act, an East Pakistan-era law that allowed the Government to expropriate “enemy”, in practice Hindu, lands.

The then Pakistani government had seized approximately 2.5 million acres of land from Hindus, affecting nearly 10 million Hindus in the country until parliament scrapped it in April 2001.

The 2001 law stipulated that land that was seized under the be returned to its original owners, provided that the original owners or their heirs remained resident citizens.

According to a study conducted by a Dhaka University professor several years ago nearly 200,000 Hindu families lost approximately 40,667 acres of land since 2001 until the annulment of the Vested Property Act, considered a “black law”.

After a protracted campaign by the rights groups and different forums of the Hindu community the then Awami League government had scraped the law enacting the Vested Property Return Act.

on 3rd. Nov. that the Leaders of Bangladesh Hindu Bauddha Christian Oikya Parishad ( Bangladesh Hindu Buddhist Christian Unity Council, BHBCUC) reacted primarily upon the tabled legislation as the amendments in the said Vested Property Return Act 1974 @ Enemies’ Property Act 1965 does not contain any relief to the Hindus left Bangladesh or staying Bangladesh returning their exile sometime out of Bangladesh.

Rana Das Gupta, General Secretary of BHBCUC told that they have not got the full version of the said Amendment Act and the available information has no scope to be relieved anyway for the persecuted Hindus of Bangladesh. They must convey the details about the plight of Bangladeshi Hindus to the International Hindu Communities in the present context of Amendment of Vested Property Return Act 1974.

It is a fact the then Pakistan Govt in East Pakistan imposed the Enemies’ Property Act 1965 to grab the land of Hindus in the advent of Indo-Pak War. Regimes changed several times with the flow of gallons of water in Padma, but the fate of the Hindus in Bangladesh remain unchanged. In each and every day after the Freedom War in Bangladesh in 1971 acres of lands of Hindus have been encroached by the Islamist Musclemen, Leaders of the Political Parties – both in power and in opposition and other State Agencies.

The non-provision of inheritance or the co-sharing of the landed property in the proposed Amendment Act 2009 in question hinted the halfheartedness of Sheikh Hasina of the Awami League Govt. in the matter of redressal of the Hindu Victims alike its predecessor Khaleda Zia of BNP Govt . At present the Hindus of Bangladesh turned as a small minority of 8% coming down from a higher population of 23% in 1971 as per available data and census reports. The tremendous persecution of the Islamists upon the Hindus in Bangladesh and the State sponsored torture over the Hindus in Bangladesh are pointed as the prime cause of the ethnic cleansing of Hindus from Bangladesh.

The Hindu Bengalees sacrificed no less blood than the Muslim Bengalees in the Freedom Fight of Bangladesh. But the face of Islamization of Bangladesh detracted the Kaffir Bengali Hind us from their civil rights in Bangladesh.

Reaction of the Hindu Human Rights Group for the matter. 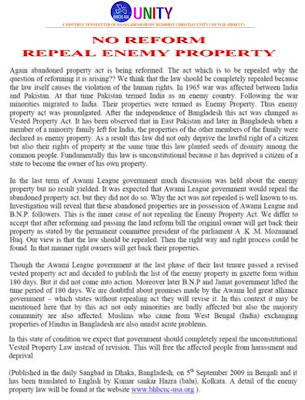 Pardon me Please to call you "Refugee Bangal". Rather it is to sensitize your sentiments. Then it must be futile.

If such a little sensation for the persecuted Bengali Hindus in Bangladesh residued anyway, We should hold a convention in the matter of Enemies’ Property Act 1965 @Vested Property Return Act 1974 @Vested Property Return (Amendment) Act 2009 in Kolkata. Still 30% Refugees from Bangladesh have lands or landed property in Bangladesh, gradually wasted out from their owner. The derived resolution of the proposed convention may be sent to the Bangladesh Government for some favourable action.

Perhaps the East Bengal Intellectual Refugee Gentle Men have hardly any time for it. Here they are settled anyway and planning to be refugee again with all the West Bengal Citizens.

Proposed Vested (Enemy) Property Amendment Bill-2009 is harassing and fatigued- In a Press conference by NGO Groups in Bangladesh:

Long harassment of 44 year’s history on justice seekers will prolong if proposed Vested Property Return (Amendment) Bill-2009 is passed by new parliament avoiding proposal of Bangladesh Law Commission. Prejudiced persons under the law will be subjected to more harassment and oppression. The proposed law has been made more complexes. As a result no remedy of the long pending problem would be available for deprived persons.

On Thursday last a Press conference organised by various Non-governmental organisations protested against present proposal for Amendment of this black law.

The speakers present and spoke in the press conference as follows:

In the Press conference the speakers said since 1965 to 2007 about 26 million acres of those lands are handcuffed within this black law. Consequently 60 million Hindus had been tremendously harassed and shelter less. Within Year 2006 to 2007 more lands belonged to Hindus have been enlisted and declared Vested.

The Speakers vehemently opposed the present Amendment Act-2009 and said that the Committee constituted for release of the vested properties is completely depending on bureaucratic design. The government entrusted those persons in the committee who enlisted vested property illegally in the past through fraudulent means. They also alleged that preference of a vested group or beneficiaries have been given in the proposed amendment bill. This endeavour is inconsistent with natural justice and equity. If this Amendment bill-2009 is passed the miseries of deprived families would be multifarious.

In the Press conference it is claimed that -

(i) List in the form of Gazette should be published by government in view of the judgment made by Appellate Division of Supreme Court of Bangladesh.

(ii) All properties beyond –gazette list should be released urgently.

(iii) The date of hearing of the District tribunal should be determined for judgment.

(iv) Provision for appeal against judgment of district Tribunal should be made before the High Court.

(v) Provision in new amendment the word “continuously” with regard to meaning of citizenship should be abolished.

Posted by Bengal Spotlight at 10:58 AM