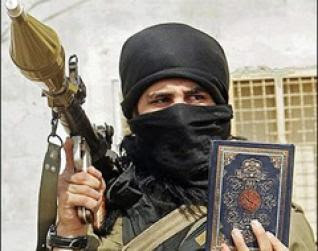 ISI (Inter Services Intelligences), the International Spy Agency of Pakistan sent an amount of 5 Lakh Rupees to Bangladeshi King-pin Fayezullah to blow up American and Indian High Commission in Dacca within last two weeks. Fayezullah is one of the sons of Mufti Izharul Islam Chowdhury, the Chairman of BNP-Jamayeet led Four Party Coalition of Islami Oikkya Jote.

As per reliable source the amount for assigned explosion was deposited in the account of Fayezullah in Al Barka Islamic Bank. This Islamic Bank is allegedly connected with the finance of Pakistan and Sudan Terrorists Group and Taliban outfits.

It is believed that T. Nasir alias Mohammed Ali and Asaf Sarfaraz alias Abdul Qaium, two LeT (Lashker-e-Toiba) propagator being Indian National as reported, are now staying around Dacca with another un-identified Pakistani Group Commander of LeT to execute the Blast in Indian and American High Commission. Bangladesh Police and Intelligence are trying rigorously to search them out.

From the interrogation of the arrested militants it is revealed that T Nasir and Asaf are connected with Pakistan based LeT and the supporting fund of five lakhs came to the account of Fayezullah for the purpose of destruction of America and Indian HC in Bangladesh. Both the sons of Mufti Izharul Islam Chowdhury are connected with HUJI(Bangladesh). 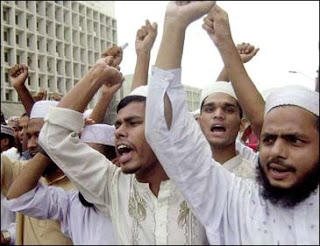 Mufti Izharul Islam Chowdhury told the media that his sons are manhandled by the police and the funds are coming from foreign for running the Mosques, Madrashas and Islamic Orphanages. Some part of the funds is also utilized for the publication of Islamic Magazines. Mufti Chowdhury cautioned the Police that he would be MP or Minister within six months and then it will be very bad time for the concerned Police officials. Violent Islamic Groups in Bangladesh believe that the Talibanization of Bangladesh is possible in forth coming years very soon.

From another authentic source it is confirmed that Five Extremist Organizations in Bangladesh are working jointly to free 500 jailed militants anyway. This Organization is now supporting some eminent Muslim lawyers in West Bengal to set up a wing to move to set free the arrested and barred Muslim activists in West Bengal. In the name of "Jehadi Mukti Andolan" or "Free the Jihadists", huge funding are coming to the accounts of some political parties and religious organizations from the Middle East. They have planning to strengthen double in the sector of building the Mosques, Islamic Seminaries (Madrashas & Maqtabs), NGOs, News Papers and indigenous arms-weapons factory everywhere.

Swal Seller from Kazipara area under Barasat Police Station in North 24 Parganas. Police arrested Rameez Ahamed Thandu (24 yrs) and Hillal Ahamed Bhatt (23 yrs) from the house of Asgar Ali Gazi in Pal Pakuria village on Friday Midnight (13/11/09). Police seized two very sophisticated fire arms and cell phones from them. The suspected militants are taken to police custody after production them to Barasat Court. In 2009, more than 30 persons have been arrested as suspected terrorist for serious activism from Bangladesh, Pakistan and Kashmir by the Police and Intelligence Departments in West Bengal.

In the winter the Kashmiri Swal sellers usually rent some houses to run their business of winter garments, swals etc. in every towns and metropolis in West Bengal. But for some years it is reported that these Kashmiri Muslim garment sellers allegedly marry minor girls of poor families, disconnect these girls from their parents after taking them to Kashmir or in some unknown places, grows illicit affairs with the local women through various allurements and sell illegal arms and drugs etc. They may be connected with back office of the Terrorist Organization or operate different allied activities promoting terrorism in West Bengal.

Posted by Bengal Spotlight at 10:07 AM