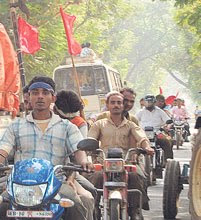 Armed on bike procession on CPIM cadres in Goghat areas in Hoogly on 07/11/09 morning. 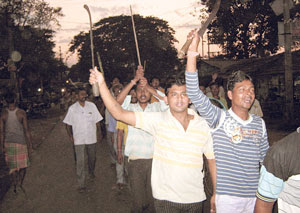 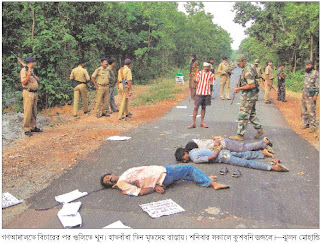 Claiming responsibility for the gunning down of four Eastern Frontier Rifle jawans, the CPI (Maoists) on Sunday night dared the West Bengal and Central governments to deploy as much forces as they wanted in the trouble-torn West Midnapore district.

"We have killed the four jawans as they tortured innocent school children who had taken out a rally in the area on Saturday demanding the educational institutions be vacated by joint security forces and their classes resume at the earliest," Maoist leader Koteshar Rao alias Kishanji told reporters from an undisclosed destination."We will win the war. Let the Centre deploy as much forces as they want," the top Maoist leader shot back.

To a question if the attack was a challenge posed by the Maoists to West Bengal Chief Minister Buddhadeb Bhattacharjee who left the district just two hours back, Kishanji retorted "But we have long before challenged the central and state governments, and as I have just said, the war is on."

Four EFR jawans were killed in a surprise assault by Maoists while they were patrolling near Gidhni Bazaar in the Jhargram sub-division of West Midnapore district today, barely hours after Bhattacharjee left after a two-day visit. The ultras also took away the arms of the four slain jawans.