Are we waiting for a next 26/11 in Kolkata? Stop suspected Muslim Organisations, Masjids, Madrashas, Fake Notes, Arms Dealings and HUJI Recruitment at once. 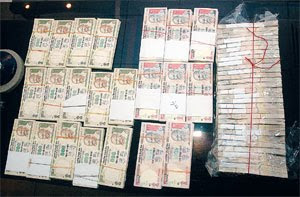 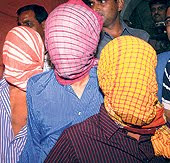 Fake notes seized after the arrests; (above) the terror suspects. (Pic. Amit Datta)

A STAFF REPORTER || The Telegraph, Kolkata.

Calcutta, Nov. 17: Three Bangladeshis with alleged links to a terror module whose name had cropped up after blasts in India were arrested in Calcutta today on their way to north Bengal.

City police caught the trio while they were waiting in Babughat to catch a bus to Malda and found on them maps of some vital installations in Calcutta and fake Indian currency with a face value of Rs 30 lakh.

The Bangladeshis were identified as Abdulla Baki, 24, and Mohammed Tahidur alias Madhu, 21, from Rajsahi district and Abdul Rehaman alias Nafiz from Barishal.

“They belong to a little-known terror module called the Shahid Belal group and had entered the city today armed with fake driving licences and voter I-cards. Nafiz had earlier visited Calcutta in April after sneaking in through the Hili (South Dinajpur) border but he had gone back subsequently,” said Rajeev Kumar, inspector-general with the city police’s special task force.

The police said Baki’s name had first cropped up during investigations into the fidayeen attack on the Hyderabad special task force’s headquarters on October 12, 2005. A Bangladeshi national had blown himself up at the complex’s gates, killing a sentry.

Investigations later revealed that the attacker belonged to a group headed by Shahid Belal, an Indian from Hyderabad then based in Pakistan.

The group’s name resurfaced during investigations into the July 28, 2005, blast on the Shramajeevi Express, which had killed at least 10 passengers.

The police claimed that Belal had been killed recently and the reins of the outfit, which has links with the Harkat-ul-Jihadi Islami (Huji), had passed to Khwaja alias Ahmed, another Indian based in Pakistan.

“The three arrested today had tried to sneak into India through the Murshidabad border along with a fourth member of their outfit, Zahid, just before the general election in April. Zahid was intercepted by the BSF and the others had hurried back to Bangladesh,” Kumar said.

Today, they were said to have reached Calcutta from Murshidabad on the Lalgola Express and met a local contact.

The police said the trio had been trained in both Bangladesh and Pakistan. Their job was allegedly to recruit youths for arms training in Bangladesh.

Those who are unable to understand the headlines in connection of this report may go to Muslim populated areas anywhere in West Bengal to stay there for a week or less. Then it will be realized that severe consequences made out of Unauthorized Islamic Preachers from Bangladesh, Decorated new built Mosques by a so called poor clan, Mysterious Activities of Muslim NGOs, Unbelievable threat to Non Muslims and the Covered but Perceived Activities of Islamic Cadres agreed by Political Parties of all colours. This trailer may enter into a full size film : ISLAMIC BENGAL 2011. Too Much ? Wait and See the peril of Sea named Bay of Bengal.

Posted by Bengal Spotlight at 2:13 PM